Our Money Will Not Liberate Us: What the NFL Protests Say About Wealth and White Supremacy

Our Money Will Not Liberate Us: What the NFL Protests Say About Wealth and White Supremacy 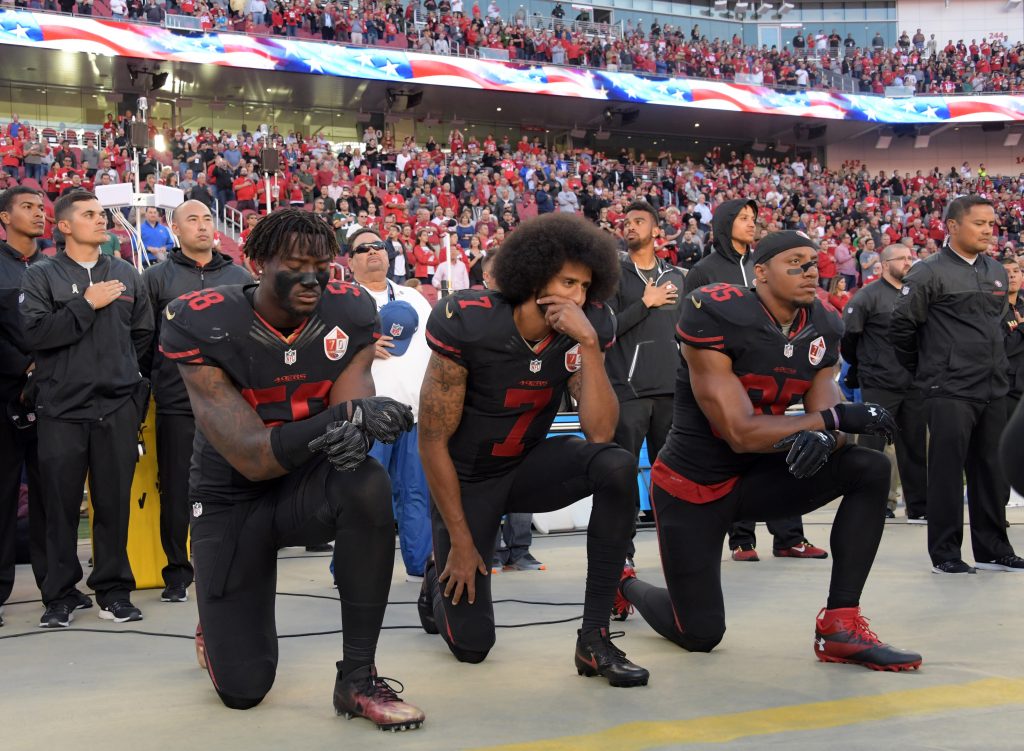 While following the news about the NFL protests over the weekend, I was struck by the complex interplay between racism and class privilege reflected in public commentary and criticism about the players.

Organizing young people of color with wealth is a core part of Resource Generation’s work, and as we’ve connected with this part of our base we’ve learned about the nuances in how class privilege and wealth mitigates but does not block or end experiences of racism. This was echoed in a recent article, “When NFL players protest racism, some critics see only ‘millionaire athletes’ who should be silent,” where the writer notes that the pushback against Black athletes protesting racism and police brutality captures the tensions between wealth, race, and security. The author writes, “Many people have the false idea that money is a savior, capable of protecting those who have it from all of life’s uglier challenges.”

When it comes to Black professional athletes protesting police brutality, money does not protect them from the ugliness of racism — in fact being highly paid is something critics use in attacks against them. For example, conservative talk radio host Joe Walsh denounced the protesters as “ungrateful millionaire athletes.” The use of “ungrateful” is particularly revealing. Gratitude is expressed when something is given, implying that overwhelmingly white NFL owners are giving money to undeserving Black athletes instead of compensating them for their labor. The expectation that gratitude is the only emotion and behavior that is permissible for Black football players to express while risking their health and lives to perform physical labor for their overwhelmingly white coaches, team owners, and fans is deeply racist. In addition, the frame of being “ungrateful” echoes that of “government handouts” — the pervasive racist myth that Black people are taking things that don’t belong to them. Contrast that with how Trump and his billionaire, almost all-white Cabinet — many of whom were born into wealthy families — are presented as “self-made” and as having worked hard and earned their money.

No one is calling Trump and or Republican Congresspeople “ungrateful” for backing tax reform legislation that will create billions in tax cuts on the wealthy, further gutting the public infrastructure that was the foundation of their wealth. Lowering taxes on the wealthy is in effect stealing from the public commons to further enrich the wealthy few — yet no one calls the white wealthy men behind this egregious legislation “overpaid, arrogant, disrespectful, ungrateful, unpatriotic” like former GOP gubernatorial candidate Corey Stewart called the NFL players.

Even though classism and capitalism as a whole systemically benefits those with more access to capital (financial capital such as money and cultural capital like access to higher education), racism makes Black wealth suspect while white wealth is deserved (almost never “overpaid”) and a reflection of alleged inherent intelligence, worthiness, hard work, and goodness. Anti-Black racism runs so deeply in the U.S. that white people abandon their ingrained cultural worship of wealth and rich people to use wealth as a way to discredit Black people’s actions. This resistance to Black wealth accumulation doesn’t stop at insults — white wealthy people have systematically denied access to wealth for Black communities for centuries (through slavery, sharecropping, segregation, denying access to the benefits of the GI Bill, redlining, prisons, and more) and directly by committing acts of terrorism such as the destruction of Black Wall Street to strip away wealth from those who managed to build it.

Corey Stewart hoping that the NFL goes bankrupt, Colin Kaepernick being blackballed from playing, and Trump calling for protesting athletes to be fired echoes the historical pattern of white backlash to Black success by denying employment or avenues to build wealth.

As a Chinese American, I’m familiar with how easily communities of color can become scapegoats for white economic anxiety perpetuated by the white wealthy ruling classes. Chinese laborers in the 1880s experienced persistent attacks and expulsions. Some were hired as strikebreakers by the Union Pacific Railroad and bore the brunt of white resentment in an attack by 150 white men who killed 28 Chinese workers. The retaliation against Chinese immigrant workers reached a fever pitch in the Chinese Exclusion Act of 1882, banning Chinese immigration entirely, and not fully lifted until 1965. In this backdrop of racism and exclusion, my parents’ wealth is not just an individual accomplishment; it represents something about their group identity as Chinese people and as immigrants. In the white imagination, my family represents whatever most reinforces the status quo of white supremacy at the time — we are the model minority or disloyal spies, hard working hustlers or job stealers. Our wealth could make us a success story or a threat, all depending on the fickleness of political climate and white fear that can shift overnight. As a Chinese American, I am not subject to the intense knee-jerk suspicion that Black people experience from others, but I do know that money is not a savior from racism.

That is why we at Resource Generation believe that individual wealth accumulation will never create collective safety and freedom for people of color. While individual wealth may offer some safety and access to power for a select few, it cannot ensure communal safety from racialized violence by the state, corporations, or climate change. The NFL players know this, and that is why they are leveraging their platform to fight back against police brutality and systemic oppression. They know that accumulating money and wealth doesn’t end racism and that it’s the power of collective action that can move us all closer to true liberation for our communities.
—
If you’re a young (18-35) person of color with wealth thinking about the equitable distribution of wealth, land, and power, check out our book, Between a Silver Spoon and the Struggle: Reflections on the Intersection of Racism and Class Privilege.

Want to check out our multiracial community of young rich folks committed to the equitable distribution of wealth, land, and power? Become a member.