A Modest Story About Moving Cash

A Modest Story About Moving Cash 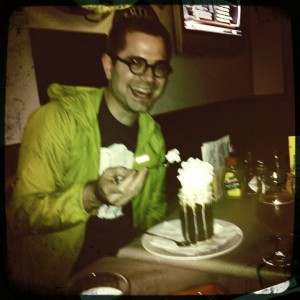 Howdy! Farhad Ebrahimi from the Chorus Foundation here. I’d like to tell you a little story, if you’ve got a moment. It’s the story of how we moved our cash holdings from a large financial services company (Fidelity Investments) to a local socially progressive bank (Wainwright Bank & Trust Company, now a part of Eastern Bank). It was a pretty simple process, and it’s been a key part of how we’ve brought our investment portfolio to bear on the same issues that we address with our grantmaking.

But first, some background information
The Chorus Foundation is a small, Boston-based private foundation that I set up four years ago to focus on issues of environmental sustainability. If you’ll recall what was happening in the financial world at the time, you’ll appreciate how lucky we were that the vast majority of the initial contributions were made in cash. It was not unlike the scene in “Steamboat Bill Jr.” where an entire building facade falls onto Buster Keaton, only he just happens to be standing in the gap created by one of the open windows.
As time went on, we slowly began to invest that cash (emphasis on ssslllooowwwlllyyy). Our hesitation was only partially due to the lingering feeling that we’d just narrowly avoided being flattened; we’d also caught the mission-related investing (MRI) bug, and we weren’t terribly interested in deploying any cash for anything that didn’t fit the bill.
A question was raised
Given our unusual asset allocation, we had to ask ourselves: if we’re really that committed to MRI, then where should we be keeping all of this cash? The initial decision to keep everything at Fidelity had been made by default; my personal account was there, our family office has a good relationship with them, etc. There wasn’t anything necessarily wrong with keeping our money at Fidelity, but it seemed much less compelling than the wonderful local community banks that I’d been hearing about from colleagues with a similar interest in MRI—banks that emphasize socially responsible community development, environmental sustainability, and so forth. We wanted some of that. Big time.
And so, the search began. I’d heard so many good things about Wainwright in particular that I was tempted to just move everything there and be done with it. But! I also wanted to make sure that we knew what we were getting into. I asked our family office to help us by researching banks that might compare to Wainwright. The result? There really weren’t any that compared in terms of presence or programs, with the exception of maybe Cambridge Savings Bank. And so, the search only lasted a few hours.
What made Wainwright so special?
Wainwright’s list of environmental programs was really quite impressive. They emphasized paperless transactions, recycled paper products, environmentally friendly inks, and energy conservation (including two LEED-certified branches). They also offered discounted home equity loans for energy efficiency retrofits and renewables as well as discounted car loans for hybrid vehicles. They even subsidized their employees to encourage the use of public transportation and refused to offer drive-through tellers so as to discourage bank visits by car! Yes, dear reader, I was in love with Wainwright Bank & Trust Company.
To be fair to Cambridge Savings Bank, they had a strong investment in their community—and even had their own charitable foundation—but they did not have Wainwright’s focus on environmental sustainability, which is central to our mission.
At this time, however, Eastern’s acquisition of Wainwright was already pending, which added some uncertainty into the mix. But, after talking with David Dolbashian (VP of Private Banking) at Wainwright, we were satisfied that Eastern intended to continue with enough of Wainwright’s approach to maintain their status as our winner. We were all set! It only took about a month from the initial conversation until we had accounts opened and the cash deposited—and this was during an otherwise busy holiday season.
Status report: six months later
Both Wainwright and Eastern’s customer service styles have predictably been a little less intense than something like Fidelity Family Office Services, but everybody has been nice and helpful—especially given that they’ve been going through a transition. We’ve kept a smaller operating account at Fidelity that we use for transactions, as Eastern’s high yield account isn’t flexible enough to accommodate the amount of checks we cut. And what about that high yield? As of this writing, we’re actually doing slightly better at Eastern with a 0.30% yield compared to the 0.15% that we’d be getting at Fidelity. Everybody’s numbers are going to be beyond modest these days, but that edge is still nice. We’ve also heard exciting things from David regarding Eastern’s commitment to maintain and even grow Wainwright’s environmental programs.
So there you have it: a little story without too much in the way of danger or excitement, other than the part about the collapsing house. It would have been nice to have more options to consider, but it probably wouldn’t have made a dramatic difference to the outcome. Moving your cash doesn’t take much, which is part of why it’s definitely worth doing. I’d even be so bold as to recommend that those of you who are in a position to steer a foundation’s cash holdings consider making a pledge to Confluence Philanthropy’s “Carry the Cash” campaign. You’ll thank me later!