Protect Our Communities; Our Planet, Not Private Wealth

Protect Our Communities; Our Planet, Not Private Wealth

This April 29th, I’ll be in Washington D.C. marching alongside frontline communities — those who are being most directly impacted by climate change — for climate, jobs, and justice as part of the People’s Climate Movement.

I’m also marching as someone whose family has profited directly off the fossil fuel economy, and has a personal stake in transforming it. You see, I’m a “2%er”. My family has more net financial assets than 98% of families in the United States (you can calculate your percentage here). Much of this wealth has been passed down through multiple generations.

My great grandfather was an oil prospector. The family story goes like this: he and his brother would go around to communities in Oklahoma, buy everyone drinks, and sooner or later find out where there was likely to be drilling. Then they’d go and purchase mineral rights on all the available surrounding properties, often selling these rights back to oil companies later at a hefty price.

Through a series of trusts, my grandfather passed down a bunch of shares of Standard Oil to his great grandchildren. That means my cousins and I each got $300,000, mostly in what is now Exxon-Mobil, just for being born. 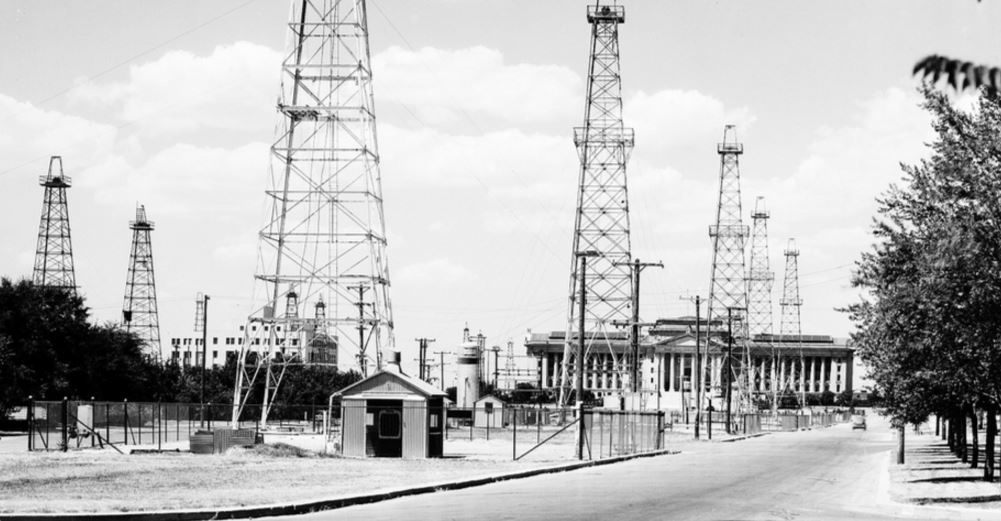 The Oklahoma City oilfield, discovered in 1928, produced more than 7.3 million barrels of oil over the next 40 years. Photo courtesy Oklahoma Historical Society.

Let me be clear: I love my family. So hard. They are really beautiful, amazing people.

And at the same time, I’m not a trust fund baby — I know there’s something messed up about a system that allowed my grandfather to extract wealth from the earth in this way.

I might not know the answer to all of those questions, but there are some things I do know in this moment.

I know that Rex Tillerson, former CEO of climate change denying Exxon-Mobil, is a worst case scenario secretary of state on climate issues.

I know that he’s also just a symptom of a larger problem: that our current political and economic system is built on extraction and domination — of land, of people, of communities — by an increasingly small number of people isolated from humanity by their wealth.

I know that I want an economic system built for the common good of people and the planet, not for the benefit of a narrow few.

I know that people like me, Donald Trump, Rex Tillerson, and the other mostly wealthy white people in his administration — no matter how “hard we work” — haven’t done anything to deserve economic security more than the other 99% of the country, or 99.9% of the world.

I know that everyone deserves economic security: a home, work with dignity, healthcare, water they can drink.

I know that a world in which everyone has access to the above is concretely achievable with the resources our country has, but that this administration is doing everything they can to dismantle it.

I know that the kind of “return on investment” I care about is one that leaves our planet in better shape for the next generation, and one that builds our wealth in common.

I know that rich people in power are scared to lose money and power. That we’re scared to be vulnerable, to rely on other people.

To admit that we didn’t get here on our own in the first place.

I know that there’s something a whole lot better waiting on the other side of that fear and scarcity.

I know it because I’ve learned it firsthand from those who are most harmed by the dominant economic system and are struggling most actively against it: people of color, women, trans and gender non-conforming people, immigrants, poor and working-class people. These are the communities who are already leading the transition to a just economy.

I know we — all of us — can’t win change if we act in isolation, and that we all have a role to play in transforming our economic and political systems.

That’s why, as a member of Resource Generation, I’m joining a movement of other young people to divest from the fossil fuel economy, reinvest in a just transition, and stand in solidarity with communities at the frontlines of climate change at the People’s Climate Mobilization on April 29th.

Will you join me?

—
Adam Roberts is a National Organizer with Resource Generation and supports RG’s Northeast and Midwest chapters. Read more of his story here.

Resource Generation organizes young people with wealth and class privilege in the U.S. to become transformative leaders working towards the equitable distribution of wealth, land and power. We envision a world in which all communities are powerful, healthy, and living in alignment with the planet. A world that is racially and economically just in which wealth, land and power are shared.