Why MMMC, Why Now, and What’s Next?

Why MMMC, Why Now, and What’s Next? 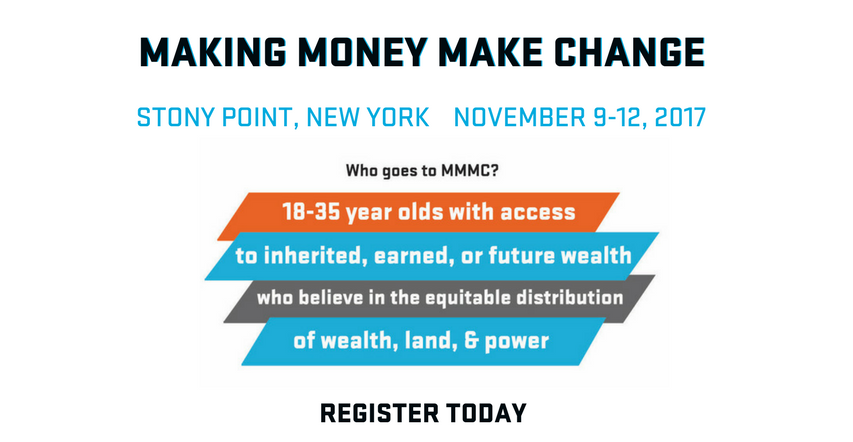 Have you registered for Making Money Make Change (MMMC) yet?

This year MMMC is November 9-12th outside of NYC. Register here.

Last year’s MMMC happened right after the election. Less than a year later, it’s hard to comprehend how much has changed. Before the inauguration, there was a small surge in collective giving; grassroots organizers called it the “Trump Bump.” Social justice movements don’t need a short-term donation “bump” but instead need everyone’s sustained care, funding, and time. We need more young people of with wealth and more white people with wealth working towards social, economic, and racial justice in this time and at all times.
Making Money Make Change is a chance to gather skills, knowledge, and community in order to resist what’s coming and what’s already here. We’ll do this in workshops and panels on classism, the racial wealth gap, and more including:

All of MMMC’s workshops are designed to help us ground in our shared resources and humanity, but let’s take a moment to remember just some of the Executive Orders that have happened in the last year: advancing the Keystone pipeline, repealing Deferred Action and Childhood Arrivals (DACA), the Muslim travel ban, severely restricting access to reproductive healthcare internationally by reinstating the global gag rule, blocking federal funds to sanctuary cities, reducing tax regulations, ordering additional border patrol agents, banning transgender military service, and revoking federal contract regulations protecting LGBTQ workers. Through every action, Trump has been clear that he intends to serve the interests of those most like himself. Anyone who is not a U.S. citizen, white, straight, , Christian, wealthy man is likely to be negatively impacted by his policies.

At Resource Generation, we know that there are people with resources who want to act beyond their self-interests. There are people with class privilege who choose to side with poor and working-class people, to fight for protections for all and, who want a world that is . Some of them are in our new video — in this video, Resource Generation members share how MMMC helped them reframe their access to wealth from something that isolated them to a tool they could use in supporting economic and racial justice.

If you come from or have earned wealth and believe in a future where wealth, land, and power are equitably shared, join us at MMMC so we can dream together about what’s next.
Register for MMMC 2017 here.

—
P.S. — if you aren’t already, please consider becoming a member of Resource Generation. We’re funded almost entirely by membership dues. Being part of organizations is a great way to support and find meaning in things larger than ourselves. Also, members get a discount on MMMC registration 😉