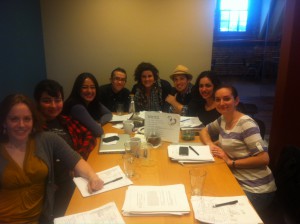 Three years ago, I decided to go to Making Money Make Change, the annual conference put on by Resource Generation. I know that I will inherit wealth in the future, so I decided to go to the conference to start thinking about this privilege, about my family, and my own access to wealth. I wanted to figure out how to put my resources toward the social justice movement in ways that felt right to me.
I remember when I did my money survey at MMMC (Making Money Make Change). This survey goes over your net worth and includes questions on how much of your last year’s income that you gave away.  I remember the moment I realized that I had given away 0.05% of what I had earned that year.  I felt ashamed and alone.  I couldn’t believe I was sitting at that conference calling myself an activist and someone who believes in giving and social justice.
I know that I am not alone in this feeling, but why?  Why are there blocks when it comes to giving? For me, the big things were: figuring out my focus, understanding what my passions were, and identifying what kind of groups I wanted to fund.  I quickly realized: what if I didn’t even know what those groups were? How would I go about finding these organizations who are doing work to make this world a better place?
During my second MMMC conference, I sat at dinner with other queer-identified folks who were interested in giving to queer organizations and projects.  The idea we worked with was to find those small organizations that we didn’t even know about who are doing the grassroots organizing that very needed in this country.  As a queer-identified individual, I wanted to be able to give my money to small, underfunded organizations in my community and other queer communities around the country. The whole group had similar ideas and values and wanted to work together to achieve this goal.
At our summer meeting in 2013, we learned as a group about the current funding in the LGBTQ community.  In 2012, 45% of the money being donated is going to broad nationally focused organizations. 61% was being donated to specific project and program support. 51% of the granted money to LGBTQ organizations in 2012 were from private foundations.* I digested these numbers and knew that this project was even more important than I originally thought.  We as a group decided to ask for proposals from organizations that have a regional focus with a priority in rural or more conservative communities, that have a community organizing focus, led by and for people of color in the community and have a small operating budget of 250,000 or less.  We decided as a group that our grants would be for general operating costs only and not project specific.  As a group, we may all have slightly different politics however our discussions led to funding small community led work that is going to go directly back to the community.
One year later, we are a group of 10 queer-identified people from different class backgrounds who are working with the Astraea Lesbian Foundation for Justice to give our money, plus money we fundraise, to small underfunded grassroots queer organizations around the country. I am now learning about the amazing organizations doing important work in our communities, and I am also learning how to read a grant proposal and how to work as a group to make decisions around giving and fundraising.  We were able to raise $120,000 dollars and give 11 grants total this year.  The groups we are funding are some of the most underfunded in the queer community and largely not thought of when one thinks to support LGBT communities.
It has taken our group over a year to get to where we are now: making plans for another year of funding!  This process has pushed me to think about my own giving and how I can come together with my community to fund the revolution I want to see and be part of, and the activism about which I feel so strongly. This year I gave my largest personal gift of five thousand dollars to the cause, which we have named ‘Funding Queerly.’ I used to be scared to give large sums of money away and now I feel more empowered to give and I also am so excited to see the power of the community  and giving within community. I am really excited to continue giving and learning about organizations that are doing work in communities all over the country, namely those that are working toward justice for low income and LGBT communities of color and rural communities.  It is my hope that Funding Queerly can continue to fundraise over time and can begin to grow larger and take on new members.  This will ensure continuation of the cycle of funding radical and vital work in the queer communities of this country.
If you have any questions about Funding Queerly please contact me at [email protected]
*http://www.lgbtfunders.org/files/2012_Tracking_Report_Lesbian_Gay_Bisexual_Transgender_and_Queer_Grantmaking_by_US_Foundations.pdf

“Donors:” If You Mean Rich People, Just Say So

iimay
As the first young person of color with wealth to become ED of RG, Iimay will be sharing reflections on living at the intersection of a strange Venn diagram and fighting racism and classism in the Tru
Read this Article