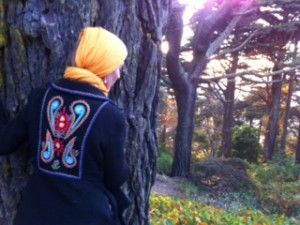 Back in April, I received a couple of phone calls from my sister, Sonja, the current family philanthropy organizer at RG, urging me to attend the Creating Change Through Family Philanthropy retreat in Petaluma. I didn’t give it much thought beyond my being busy with food justice conference organizing and questioning if a few days with a potentially “Alcoholics Anonymous-esque” gathering for rich kids would be quite worth my while. I clearly didn’t have an idea of what RG was about—in fact, I never even looked at their website. I’d just based judgments on assumptions—funny how that goes. Then Sonja called again and convinced me to check it out.
The conference had nothing of the AA for rich kids vibe I’d expected. Rather, it created a space to have deeper conversations about family philanthropy and look critically into the issues of mission related investing and greater community participation in philanthropic decision making. I was able to step outside of the petty notion I have somehow interpolated upon myself that philanthropy is not real work, that the only real work is on the ground, in people’s movements, outside of the realm of money.
I’d always thought of philanthropy as a structured stifling of true people’s movements through supporting non-profits to do work that makes no real dent in the system. Even on the more progressive side, I saw philanthropy merely as a means for folks with hefty wads of cash in their reach to write a few checks and feel good about themselves, meanwhile endorsing this global economy of exploitation in their apathy to do much else with their privilege or investments. I can’t say I have entirely shed these notions, but RG slapped me into again acknowledging the potential for changing this current paradigm through organizing within the philanthropic community.
My sister would often laugh, saying how strange it can be to go from growing organic tomatoes and brokering occasional whopping $80 deals at a local market when we farmed together, to attending international conferences on climate change as trustees of a foundation. Or, for myself personally, to go from organizing rights based campaigns in the Bay Area to then having to make an excuse for suddenly heading off to New York and London for various philanthropic meetings.
While feeling it is an obligation to remain engaged in directing funding, I have continually wavered about its real potential for radical change. Yet when I entered a space among a group of young, wealthy individuals committed to changing the paradigm of philanthropy, it all seems more inspiring. I was especially moved by being around people who shared the sense that philanthropists also have the role of being allies to communities, movements and grantees through utilizing the access their position of wealth entitles them with. The act of giving is only a small portion of creating change. The ability to enter elite settings to speak with people who are in positions of power is something that needs to be utilized. Yet we need more of a collective voice.
I look forward to seeing more next gen voices enter philanthropic settings and talk about moving foundation endowments to mission related investing; cash into community banks, climate change and sustainable agriculture; and to help break the illusions presented by the status quo of philanthropists who work for slight systemic reform, not revolution. Those voices and folks committed to true change are definitely to be found within the RG community. During the retreat I felt that I gained strong allies, and that together we can have a stronger collective voice.
It was this sense of community among the folks at RG that I felt most inspired by in attending the retreat. I find it absurd that folks talk about stopping a coal fired power plant but don’t know where their investments are sitting—or know and shrug, not investigating the power of shareholder advocacy. I also find it troubling that people can sit in an office of some US city and talk with conviction of what needs to happen on the ground in Burkina Faso without deeply consulting people on the ground. This makes it more inspiring that within the RG community there are strong  hearts and intellects that can step up as a collective Next Gen voice and begin to revise how decision making happens so that it more closely involves the people the very decisions will affect.
At the RG gathering, I had many a discussion with others about how to mix philanthropy with other activism, how to not wear multiple hats, how to utilize what we have and really look at the position we am coming from. One strong piece that came out of the retreat was realizing how everyone needs to work within their own community. So it goes with people coming from wealth. We have great potential to influence the greater community of foundations and community of wealth, to speak from personal experience, to voice our truths, and organize for greater social and environmental change from within this realm. I was able to begin contemplating the idea that I can better work within the community of wealth than someone from outside, and that I need to combine the use of my time with both doing local organizing and organizing within the community of wealth I am a part of. I have to keep a balance with my feet in both worlds, but not shun or push away part of my reality that has great potential to be utilized for positive change.