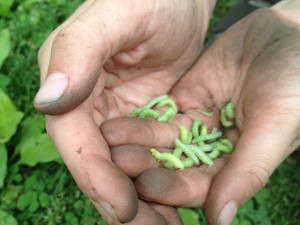 The initial gathering of inchworms my son and his friends 'saved' from a foraging robin. Their investment grew to 72 inch worms.

RG Alumni Julie McVeigh talking about her experience becoming part of the Tracies, a team of major donors who have committed to giving at least $10,000 a year for at least three years to RG. During the first year, the group voted on a name and decided to call themselves The Tracies, in honor of one of RG’s founding members and first Executive Director Tracy Hewat (who is also one of the initial founders of the major donor team).
When Resource Generation asked me to be a Tracy, pledging to give $10,000 each year for three years, I gasped and said I couldn’t. I wanted to support RG and I thought giving $30,000 was for those who had a lot of money, not me. The most I had ever given an organization was $10,000 once to a capital campaign. In general, my husband and I gave a handful of $1,000 gifts each year. I took a deep breath and stretched to pledge RG the support of 1/2 a Tracy at $5,000/year for 3 years.
Shortly after this pledge, I was completing the RG money survey at one of their national retreats. Looking at my numbers on a page collected in one place, I realized that Patrick and I could give $30,000 over three years and just hadn’t before. No one had asked us to consider it seriously and thoughtfully. I called back and agreed to be a Tracy. Becoming a Tracy was a stretch for our comfort zone. Once we agreed, we didn’t want to leave the other social justice organizations that we support so far behind, and we still had a stretched comfort zone and a budget that we needed to respect.  We couldn’t match them to RG’s $10,000, but we did bump them up doubling, tripling and magnifying our numbers by giving to more groups.
This year, the RG executive director transition was accompanied by a thoughtful request for us as a community to support Jessie Spector, the new ED, and help support the growing budget with a new 5 year pledge at a higher rate and to consider matching our pledge to a social justice organization of our choice (as part of our Movement Match this Spring).
While Resource Generation is one of my favorite organizations and is at the center of work I am passionate about, RG has always been my organization and not my husband’s. I knew the match to other organizations would resonate with him more than the increased new pledge. But could we increase our RG grant to a gift larger than we’d ever made and match it to another organization?
In that moment, I woke up. I was scribbling the numbers and figuring out if/how we could do both when I realized that what I was supporting was RG engaging me to be real about the resources that I can access. To be real, to be accountable and to push myself to help build the kind of community where we are personally accountable, where we all have a say and where we all give what we can. This is why I support RG, to stretch to make that world real. This is why we decided to say “Yes” and stretch again to give more to RG and to another social justice organization. Thank you, RG, for asking me to stretch. Thank you for asking all of us to stretch. Together we can create a new kind of community and a new, more honest relationship to the resources in our lives.
If you are interested in finding out more about our major donor team, The Tracies, email [email protected]