Why Resource Generation Members are Joining the Tax March

Why Resource Generation Members are Joining the Tax March 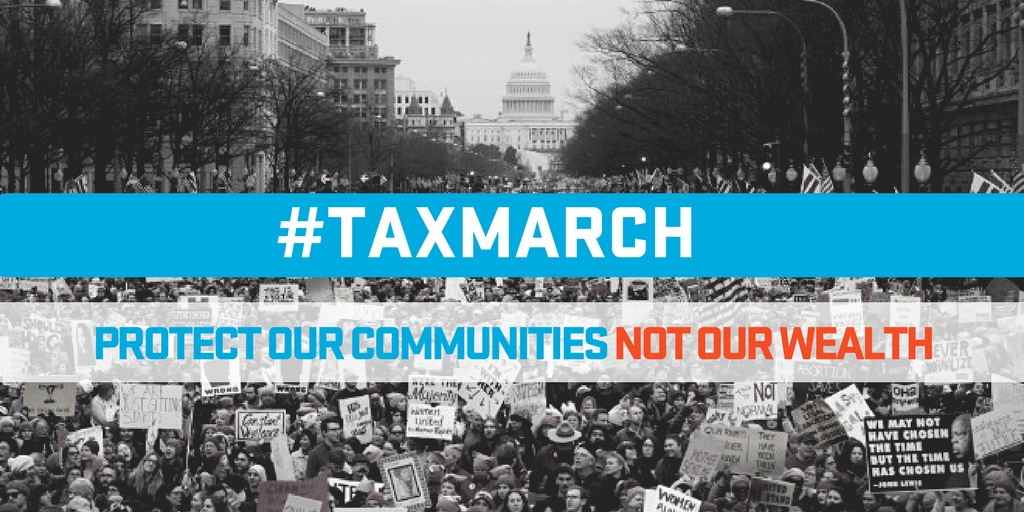 “As a young person with inherited wealth, I am proud to march on National Tax Day because wealthy people like myself benefit unjustly from our inequitable tax system, which is based on the exploitation of the working class. I just turned in my taxes and despite having both inherited wealth and a middle-class income, I only fall in the 25% tax bracket! I believe we should tax wealth like income. I believe that the wealthy need to pay our fair share of taxes and fight against any further tax cuts to the wealthy. Additionally, Trump has promised corporate tax cuts ‘from 35 percent to 15 percent for companies, small and big businesses’ which would benefit both major corporations and people who have money invested in the stock market. As young people with wealth who care about economic justice, we need to speak out against the policies that benefit us materially but harm us on a level of our values and care for the collective. We can expect to get richer during this administration, and I encourage all of us to reflect on how to redistribute that money we will unjustly earn.”

“In this time when wealthy people are amassing even more power in government, advocating for less progressive taxation in a system that already heavily favors them, those of us with access to wealth who believe in contributing our fair share need to speak out. I reject the greed that has led to massive tax cuts for the rich and starved social services for the poor. I was fortunate to grow up in a town with a strong tax base, good public schools, and many opportunities to get ahead as a result. I believe our tax system should help make those opportunities available to everyone. The policies of Trump and his wealthy friends would take us in the complete opposite direction, concentrating even more resources and power in the hands of the privileged few.”
— DANIEL BACKMAN, Resource Generation member

“The ways wealthy people are able to skirt paying their fair share of taxes is truly mind-boggling. Myriad deduction opportunities, low capital gains taxes, and other avenues allow wealthy people to stockpile more and more money for themselves even as the majority of people in our country struggle to make ends meet. Taxes fund some of the social supports we value most, and if we want to live in a country that takes care of its most vulnerable citizens, we need to pay up. As a wealthy person, I believe that my peers and I should be paying more in taxes, not less! The bottom line is that wealthy people can afford to pay more, and therefore, they should. They’ll still be wealthy, even after a more progressive tax code is put in place!”
— SARAH FRANK, Resource Generation member

“I have never had to worry that I or anyone in my family would lose their home because of medical bills, or that if I lost my job I would go homeless or hungry in a matter of days or weeks. Millions of children, the elderly, veterans, and the disabled live with the daily violence of poverty and on the brink of catastrophe. In this context, it is unconscionable and immoral that such extravagance and such desperation exist side by side. It is also bad economics, and it is holding all of us back from greater well-being. Raising taxes on high incomes and on wealth isn’t just about helping the ‘less fortunate,’ it is about all of us living together with greater freedom and dignity. Taxes are not charity, they are membership dues, and should be used to provide for all our common needs–needs that we share because we are human, not because we “deserve” or “qualify” for them. Higher taxes must pay for universal healthcare, stronger social security benefits, universal paid family leave, high quality child care, and to ensure no child lives in poverty. I want to live in a country that treats everyone to the security, dignity, and freedom that I have had my entire life as a person raised with wealth.”
— EVAN CASPER-FUTTERMAN, Resource Generation member

“As young people with wealth who have benefitted from an unjust and corrupt tax system, we have a responsibility to fight for a fair system that protects our communities, not our wealth. The U.S.’s current tax system — its absurd tax cuts, loopholes, and subsidies to benefit wealthy people and corporations — is designed to keep wealth concentrated in the hands of a few. But all wealth and corporate profits are extracted, usually violently, from natural resources and the labor of the multiracial working class. In fact, we simply can’t talk about wealth in this country without addressing how the U.S. economy is built on slavery, genocide of Native Americans, and environmental destruction. A fair tax system is essential to distributing wealth equitably by investing in communities and our environment. But in the richest country in the world, a fair tax system is, at the very least, a moral obligation.”
— IIMAY HO, Executive Director of Resource Generation

“I’m marching to say ‘I’m rich — tax me!’ Taxes can be boring and unsexy, but they’re so important, which is why Saturday’s march is so crucial. Taxes are one of the best ways for people to invest in government services that support marginalized communities. Wealthy men have hijacked our government. They are focused on enriching the wealthiest Americans while distracting everyone else by blaming their economic woes on ‘the Other’ — people of color, immigrants, ‘terrorists.’ As progressive rich kids, it’s so important that we stay focused on the real villains here: people with way more wealth than they need who are changing laws to help them amass even more wealth than they can possibly spend or use to create jobs. We need to hold our community accountable!”
— HOLLY FETTER, Resource Generation member

“Campaigning for tax justice is a no-brainer when you see the math — which I did recently (and serendipitously in time for tax season and oncoming protests). The effective tax rates for the rich and poor in this country don’t track the real wealth disparities across our country’s economic chasm, or even the approximately fairer marginal tax rate. It’s a total wtf; the current tax code is gross theft. Tax deductions on yachts? I can’t. Taxes are what we pay for civilized society — and us rich folk, who I’m led to believe are also participants in civilized society, must not be exempt. As a young person who has inherited wealth and also has a high paying job, who makes some money from investments (umm, lower tax rate on capital gains than wages?), I simply don’t pay my fair share. The IRS is driving my getaway car. And that ain’t right.

“And while I’ll rumble down with the perfidious robber jingos in the white house for how they abuse our dollars once they get them (who, btw, have median wealth in the millions, cough cough they write the tax code)…I’m newly dedicated, as my accountant scrambles to complete my returns, to show up on Saturday to march with my fam of young people with wealth (Resource Generation), and the rest of y’all; to sing with the chorus for a damn civilized society. Where everyone can have equitable access to the basics. Not a caste system or a dog fight like we have now. The way it stands, I’m gonna be fine. But I won’t be made a thief and I won’t be complicit. Y’all will see my well-fed face come Saturday below a sign that says I’M THE 1%, TAX ME MORE.”
— ROSS CHAPMAN, Resource Generation member

“I march because I continue to be horrified that Ryan and Trump would even consider letting rich people pay less in taxes in order to snatch health coverage away from 24 million Americans, as they proposed in the failed, but not dead, American Healthcare Act. It’s fundamentally unfair, undemocratic, and viciously cruel. I’m not sure what kind of values those are, but they aren’t mine. And they aren’t the values of many people like me—people from upper-class backgrounds who are in theory supposed to support these tax changes.

“I want a world where everyone has the opportunity for good health, a family-supporting job, safe housing, and a toxin-free environment. I want an economy that works for everyone, not just for the rich donors leaning on Ryan to give them a tax break. But I can’t bring that world into being on my own. Like it or not, we’re all in this together. As a country we need to take care of each other, and that means healthcare for all—not just for the rich. Trump and Ryan, you’re listening to the wrong rich people. You’re not getting away with it on my watch.”
— SAM WAXMAN, Resource Generation member