On April 12th, 2013, the Resource Community came from near and far to celebrate RG’s 15th Anniversary in lower Manhattan. Here are the speeches given by RG’s founding, outgoing and incoming executive directors. 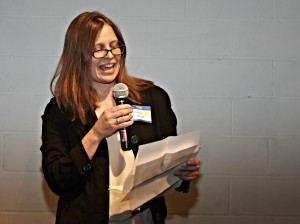 I was always incredibly inspired by the actions of other conference-goers, but I often felt like I was participating in a strange mirror image: they talked about things like giving money to their children, and I was thinking about receiving money from my parents. I did not find a way to address the issues from my perspective, and the community, which was so, so important to me personally, didn’t meet me where I was.

On a political level, many of us wondered what we (as the left) were doing.  We had a seemingly bottomless need for both money and skill, but we weren’t effectively engaging funders under 40, and in fact, we were letting our 25-year-olds kind of go it alone, ignoring the fact that these were 25-year-olds who – if we were lucky – would be funding the left for the next 60 years. That’s no way to build a movement.

But no one organization had a mission of focusing on people with wealth in their 20’s, and no one organization had the time & the stamina & the resources to do credible outreach into this community. The result was that in my age cohort, few of us knew each other, and as a group we really weren’t giving what we could – either in terms of money or skills.

Resource generation was designed to do that outreach, to send up a bright enough flare so that young people with wealth would find it. And to hold open a space for those people to have the pressing conversations of their moment – whatever those were.

But it doesn’t stop there. Because Resource Generation is focused on a specific age bracket, to fill specific needs – both within the constituency and on the left – it is always bringing in new people, and always graduating people out. This is unlike the structure of any other wealth group. Those other groups are working to have stability & low turnover. Resource generation is building at the base. And to that end it brings in new people ALL THE TIME.

Which leads me to two closing thoughts.

One is that every year some of our progressive elders, like my parents, who are in their 80’s, pass away. And every year that Resource generation is in existence, it pulls in more people, who then have some shared experience, shared skills, shared community. The result of these two things happening simultaneously is that every year Resource Generation is touching a larger percentage of the total universe of ALL progressive funders. I have no idea how many years before it’s “a statistically significant percentage” but meditate on that tonight, as you look at Resource Generation’s work.

My last thought is about funding – not for other progressive organizations, but for Resource Generation itself. I understand there’s a pitch later this evening, and I want to leave you with this: For all the reasons I’ve mentioned – the increased money to non profits, the ordinary and extraordinary acts of current constituents, the long term impact on the progressive left – there is no question in my mind that of all the giving I’ve done over the last fifteen years, no gift has been leveraged better than my gift to Resource Generation. 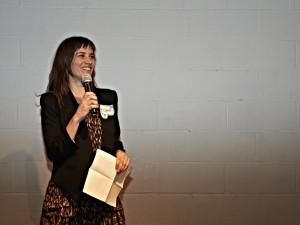 Hi everyone! It’s amazing to see you all here. How are you all doing?

I’m Elspeth, the outgoing Executive Director of Resource Generation. I want to share a few things tonight and I want to start by thanking you. For coming out tonight, and for all the work you have done with RG and to support RG over the years. Each of you in this room has made RG what it is, and if this is your first brush with RG, welcome. I’m so happy to be celebrating with all of you tonight.
For 15 years now, Resource Generation has been organizing young people with wealth to move money, organize within philanthropy, break down the class system, build community, and shake things up in the name of justice.

I want to tell a little bit of my RG story. When I was 26 I went to an RG giving plan workshop with a trust fund I’d sat on for 5 years, a readiness to stop avoiding it, and no clue what walking into that first RG program would lead to. Like many RGers before and since, I was welcomed in, allowed to take baby steps, and pushed to make some moves and take some risks. Eight years later I have been part of a donor circle to support organizing in the Gulf South after Hurricane Katrina that demanded that all my big ideals be applied in a real life situation where things were no longer simple… I have given away more money than I initially inherited…. I have built incredible life long relationships with other young people with wealth and people from all class backgrounds who are working toward a shared vision of the world… I have marched with Occupy as the “1% standing with the 99%” and got real about the role the rich can have in fighting for just taxation and basic needs for all. And it’s 100% because of this community. So many of you out there and many who are not here tonight have been on similar journeys.

So let me address the question I have asked myself many times – Why are we doing all this work and why have we been doing it for so long?
Well, remember your day today. Waking up this morning, what you ate for lunch, a conversation you had… Well today is the day with the greatest disparity in the distribution of wealth since the Guilded Age a century ago. The top 1% owns, meaning they have a net worth of, more than 90% of America’s households combined. And the disparity is getting worse. Not the world you want to live in, right? Not good for you, not good for anyone.

But we know that the world could look really different…

Resource Generation envisions a world in which all communities are powerful, healthy and living in alignment with the planet. A world that is racially and economically just in which wealth, land and power are shared.
That sounds a lot better right?
So back to today. Today RG is organizing multitudes of young people with wealth to work for the redistribution of wealth, land and power, to work towards that vision.

Come with me in a time machine for a minute. If you’d like to, close your eyes, I’ll be quick.

Imagine, It’s 15 years from now, April 12th, 2028. The Executive Director of RG is standing in my shoes, speaking into this mic to all of you and to the hundreds of others who are now part of the RG community.

And that’s just the start.
So that’s where we’re headed. But how do we get there?
I want to propose to all of you that we’re living in a critical moment, a moment of possibility.

And we get to be a part of it. Each one of us.
But this big vision, where we’ll be in 15 years, it’s not a given. We have an opportunity to ensure that in 15 years we’re celebrating something big. And if we’re going to do it, we’re going to have to do it together.
And that’s what RG has been all about for me. The people. What we can do when we really rely on each other.

So to wrap things up,

RG is raising the bar for me and for rich people in the US and across the globe. As movements and people fighting for justice – lets work across class. If you’re not wealthy, bring all that you are to making change and push yourself to do it alongside people like me. Welcome people with wealth and expect the world of them. They’re in your midst whether you know it or not.

And if you’re wealthy, claim it, and bring all that you are to making change. Join up with people who were raised poor, working, middle, and mixed class and back them up, stick with them. We need to organize WITH each other across class – and race, gender, nationality, sexual and gender orientation, immigration status, religion…  You – and I’m speaking to everyone in this room – your vision and your story are critical. Together we’re going to help create a world of dignity and justice. 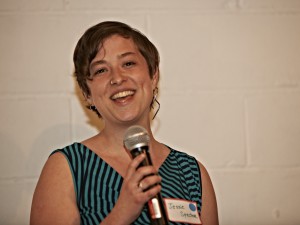 Thanks El! Hey, everyone.
It’s pretty simple – I could not be more thrilled to be taking on this role, at this time in Resource Generation. This work means SO much to me – RG has been my home since I graduated from college.
I have invested a ton of time and energy, built some of my deepest relationships, and faced some of my hardest challenges here. And I could not be more excited to dive even deeper into all of that, as Executive Director.

Its amazing – I know so many of you here. I have been working at RG for four and a half years. Almost all of you have touched me, supported me, taught me in some way. Rodney, you actually hired me onto staff! Ben, you organized me into joining my first cross-class giving circle. Gabriel, you’re my roommate now – but it was when I was a 20-year-old intern at the grassroots organization where you work that I first discovered that Resource Generation existed!

I have some serious gratitude to each of you in this crowd, and the community beyond, for getting me to this position, and for getting RG to this position – we are in really good shape, poised to do some amazing, big things – like Elspeth read us in the vision, we are working towards a world in which land, wealth, and power are shared. That’s pretty badass.

Its because of this whole incredible community that we’ve been able to get as far as we’ve come over the past 15 years.  I, and we, are going to keep needing each of you to support and challenge Resource Generation moving forward to get us to the big places we’re headed.

And I can’t wait to do it with all of you!