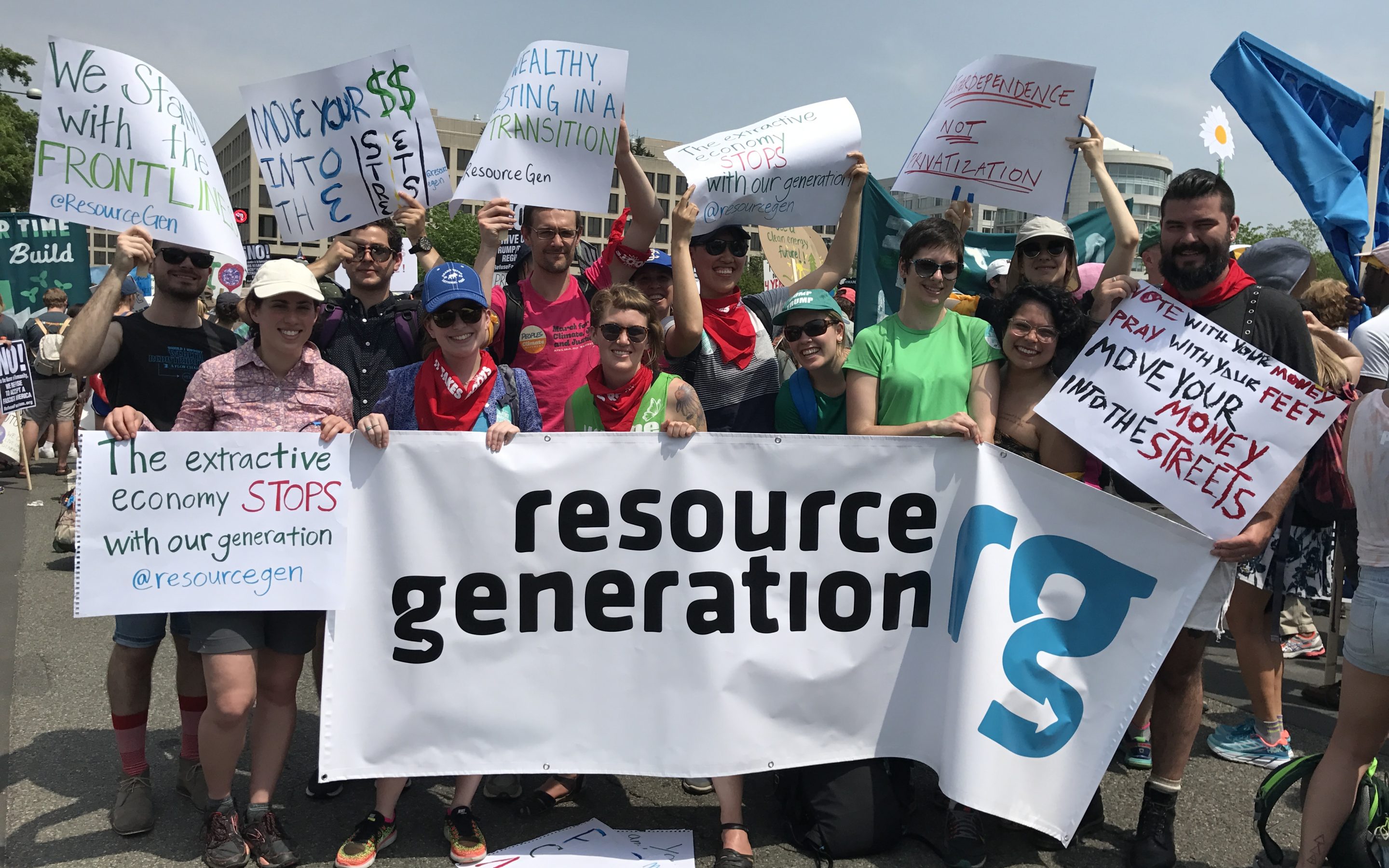 Our big fall fundraising and membership goals are to raise $100,000 and get 150 new members by the end of the year.

As Resource Generation (RG), we organize young people(18-35) with class privilege and access to current, earned, or future wealth to become transformative leaders working towards the equitable distribution of wealth, land, and power.

Supporting RG through membership dues helps increase funding to social justice, especially the types of grassroots organizations unlikely to get funding from mainstream philanthropy because their mission is too radical, too visionary, and too challenging to the status quo. Our members give on average sixteen-times more money[1] to social justice than they did before joining RG. A lot of our members increase their giving by a lot more than that, too.

Will you join our community of 500 other young people with wealth as an RG member or increase your membership dues today? 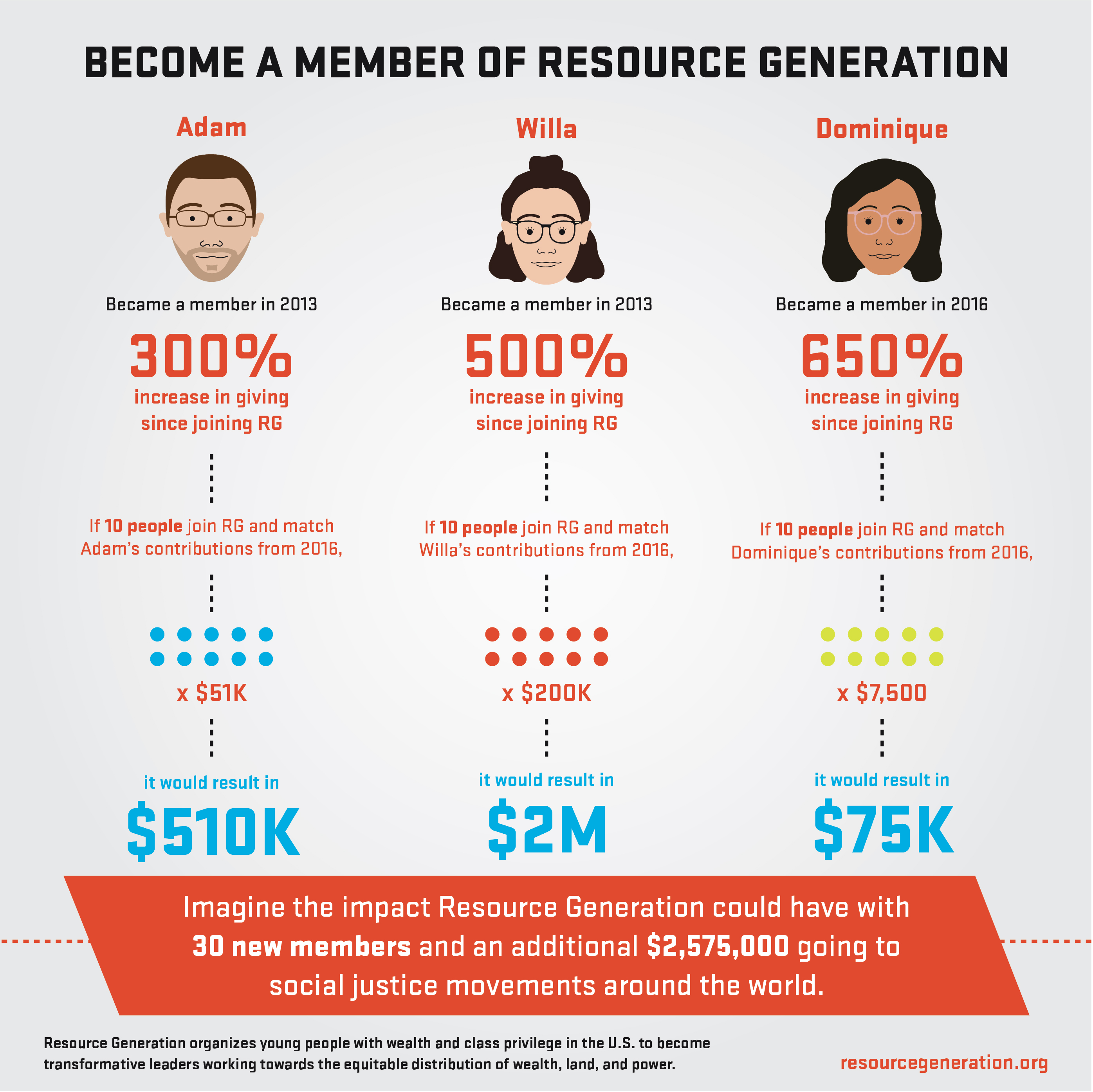 Through dynamic organizing, praxis groups, political education, chapter events, conferences, local campaigns, and being in community with each other, our work as an organization helps grow our membership of young people with wealth taking action toward the equitable distribution of wealth, land, and power. Since our founding in the 90s, our members have protested in the streets, spoke out at city council meetings, become heads of their family’s foundations, founded donor networks, and moved millions of dollars into revolutionary organizations led by working-class and poor communities and people of color fighting for economic and racial justice. This is critical and urgent work; Resource Generation is the only organization in the U.S. helping young folks confront and unpack class privilege and get organized around redistribution, not charity.

But we are currently living through what’s being called a new Gilded Age. Not since the time of the Carnegies, Rockefellers, and Vanderbilts at the turn of the 20th century was so much owned by so few. Today, the top 10% own 77% of the nation’s wealth while the racial wealth gap continues to get worse — median Black family wealth is on a path to hit zero in 36 years [2,3]. We have almost 500 members now, but we need to increase our membership and reach more young people with wealth in order to live into a future where wealth, land, and power are equitably shared. Being a long-term member and paying membership dues that significantly reflect your access to wealth helps our community do that. Here’s how:

Before joining RG, Adam, who has access to over 1M in assets, was giving away less than $200 year. After the first year of joining Resource Generation as a member, he increased that to $13,000 a year, with corresponding increases to his membership dues. Last year in 2016, he moved $51,000 to economic and racial justice organizations — a 300% increase in giving since he joined RG. For Adam, “Being a member of RG has helped support and challenge me to learn by doing, leaning into risk, and imperfection. I would have never moved into action without RG.” 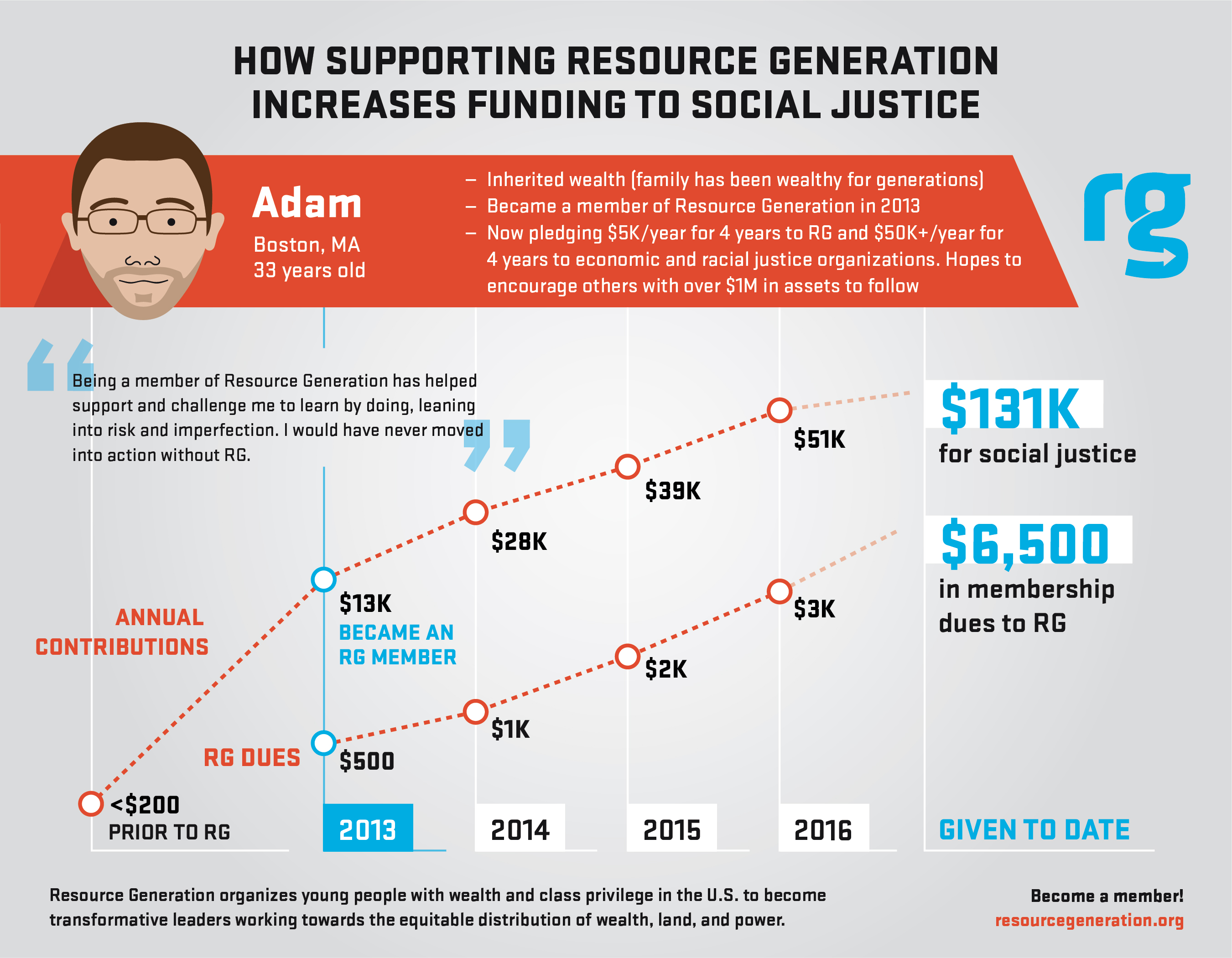 The first year after becoming a member RG, Willa started giving away almost twice as much money as she was before. To date, she’s moved $435,000 to social justice organizations and plans to give $400,000 away in 2018 alone — that’s a 500% increase in her giving over the span of a few years as a result of becoming an RG member. 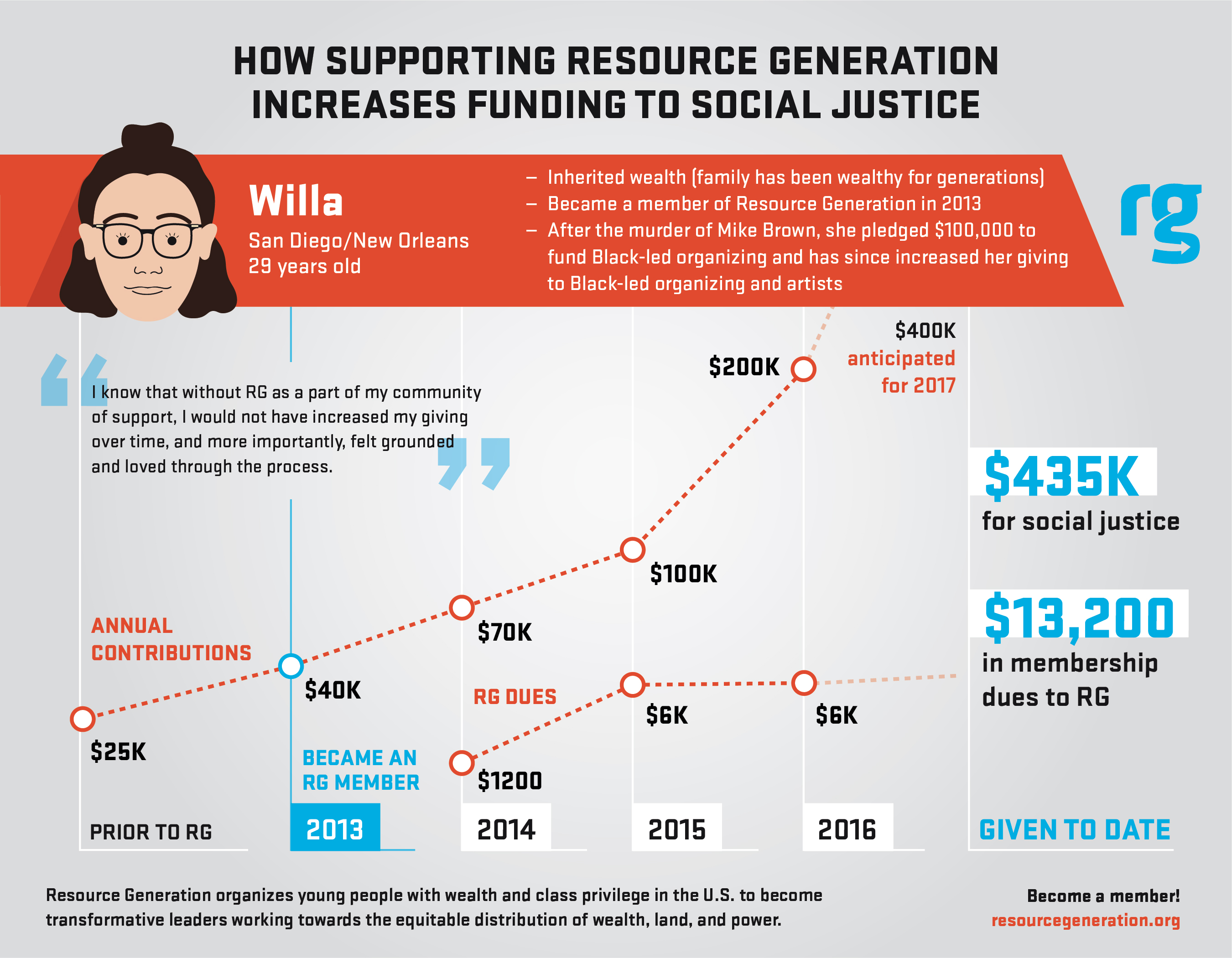 What Resource Generation is doing works. In moving money to grassroots social justice organizations, our members are returning wealth to communities most marginalized by our deeply unjust, racist, and violent economic system. Being a long-term member of RG by paying dues that meaningfully reflect your access to wealth sustains our work of supporting and challenging young people with wealth and building strong relationships with those on the frontlines of economic and racial justice working toward a different future.

Will you join RG as a member today and help us meet our $100,000 fundraising goal and 150 new member goal? Get started here.

If you’re already a member, will you increase your dues to meaningfully reflect your access to wealth and commit to funding RG for the next 4 years? Get started here.

We are so excited to continue growing as an organization with your support!