“As the South goes…” – Our Reflections on Charlottesville

“As the South goes…” – Our Reflections on Charlottesville 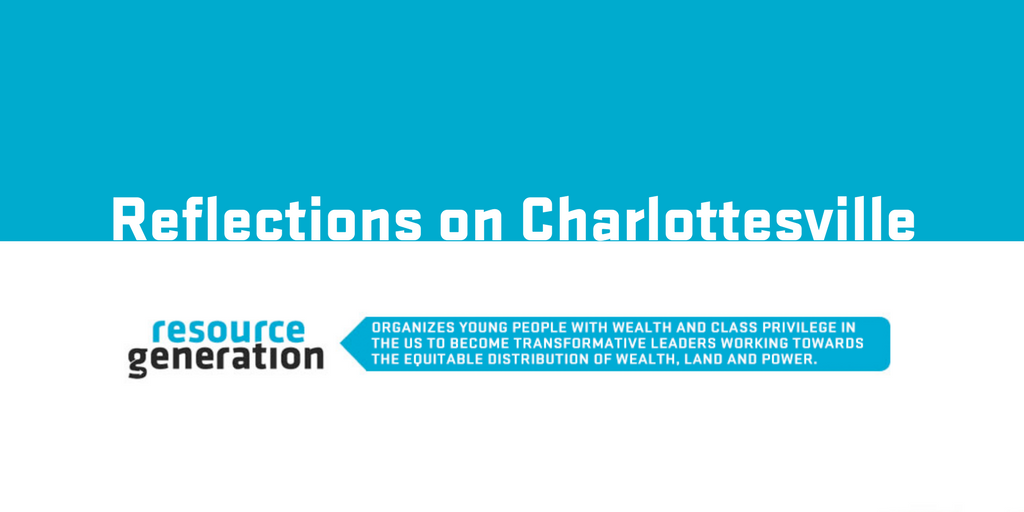 We’re sharing with you some reflections on Charlottesville and why organizing young people with wealth toward economic and racial justice is so increasingly critical.

As Southerners from different class backgrounds, Iimay Ho, our Executive Director, and Jes Kelley, our Political Education Manager, were both deeply impacted by what happened this weekend and are uniquely situated to share their reflections on this moment.

From Iimay
The events of this past weekend struck close to home. I have friends and comrades who were in Charlottesville as part of the counter-protest. I was a Virginia resident for nine years (I just recently moved to D.C.) and have visited Charlottesville. When I’m in Charlottesville I’m reminded of my college days at the University of North Carolina at Chapel Hill. Both UNC and the University of Virginia were founded in the late 1700s/early 1800s. Both are gorgeous campuses with lush green quads and red brick Colonial buildings. Both were built by enslaved Africans and African-Americans and the names of slaveholders adorn the buildings. At UNC, the statue of Silent Sam stands as a memorial to the UNC alumni who fought for the Confederacy. Friday’s white supremacist torch-bearing rally at UVA converged around a group of counter-protesters ringed around the statue of Thomas Jefferson — an historical figure representing all of the deep contradictions of the South and of the U.S. as an author of the Declaration of Independence and President that while declaring ‘all men are created equal’ was a slaveholder, rapist, and misogynist [1].

As a wealthy Asian American and child of immigrants, I’ve always had a complicated relationship with the South, too foreign to be claimed by it but too shaped by it to call it anything but home. The South’s landscapes, weather (yes, the humidity), food, mannerisms, and ways of being are in my bones — its hospitality, resilience, and racism. I have navigated its racism from childhood, seen the shapes it takes in upper middle class and wealthy settings where it becomes colorblindness and white liberalism, where “diversity” is valued but any structural change to create diversity isn’t. It’s where right-wing billionaires like Art Pope [2] can fund organizations that suppress the Black vote, cut taxes on the wealthy, slash unemployment benefits and attack the public university system all in the name of “individual freedom;” where the white Christian elite destroy the lives of poor people — white and people of color — every day, but hide it behind “business interests.”

As I followed the news on Charlottesville, it was chilling to me to see that many of the faces were young, white, Christian men (and some women) — many of whom traveled across the country with expensive gear indicating that they have class privilege, if not access to wealth, who don’t feel the need to wear masks or hoods anymore. But white supremacy has never needed to wear a mask. It is in the faces of white policymakers, police officers, caseworkers, teachers, colleagues, teammates, friends. It’s the faces of the people I very likely went to college with (Richard Spencer graduated from Duke University and Jason Kessler graduated from UVA, both lead organizers of the Charlottesville rally). It’s Trump and his billionaire Cabinet. White supremacy is professionalized and weaponized and mobilizing young white people of my generation, and it scares me.

From Jes
Being of and from the South I know that there is no inch of soil that isn’t stained with racial violence. Our red clay holds history and as I watched the footage from Charlottesville I thought about that history, of the long legacy of white individuals acting as vigilantes, of how in these moments and so many others — the evolution from slave patrol to highway patrol, from KKK members to members of Congress — has been made painfully, painfully clear. In hearing tales from people who were there I was reminded of the Greensboro Massacre and of history’s propensity to repeat. Looking into the hard eyes of the white nationalist men who marched I was reminded of the particular toxicity that is men who will strike you and tell you it’s your fault you got hit. There is a real danger in trading in responsibility for absolution and real spiritual implications of the ability to disregard another’s humanity. As a white Southerner, I worry. W.E.B Du Bois said,“As the South goes, so goes the nation.” And I notice that while this is so far from the first time something like this has happened here, it feels different and important to take note of.

I know that this wave of white nationalism is by no means contained to the South or even to the U.S. Race was constructed for the purpose of dividing people in order to maintain wealth and power for an elite few within capitalism. We are living in a time of that wealth and power being further consolidated nationally and internationally to terrifying ends. White supremacy benefits all white people but let’s be clear — it was designed by and for wealthy whites. I will continue to do my damndest as a working-class white Southerner to fight against white supremacy and I’m asking that others with white privilege within RG do the same. It is most often wealthy whites who have access to the decision makers and funders whose policies impact us all.

There is a direct relationship between wealthy conservative donors funding Right-wing organizing in rural areas and the South and the national swing to the Right that we are witnessing. Wealth and resource redistribution is a vital part of shifting this landscape. I look to RG members for models of how to do this in bold ways that help support people of color and poor-led organizing that at the same time undermines the culture of hoarding and fear that white nationalism thrives within. Please use this time as a reminder and a wake up call for sustained and powerful funding of liberatory movements in the South and everywhere.

As a multiracial community of young people with wealth, Resource Generation condemns white supremacy in all its forms. White supremacy isn’t new [3] or ‘resurging;’ colonization, slavery, and the genocide of Native Americans are foundational to the United States, all wealth extraction and accumulation, and the institutions dominated by the rich, overwhelmingly white, ruling class.

Resource Generation is organizing for a world where people of color, poor and working-class folks, women, queer, trans, and gender non-conforming folks, Jewish, Muslim, and immigrant communities are safe and thriving and wealth, land, and power are equitably shared. The very world that these white supremacists seem so terrified by is what inspires us to keep doing this work every day.

We send our thoughts to Heather Heyer’s family and loved ones and to all of those injured in the attack.
Let us stand firm and protect and defend the communities we love. Resource Generation believes in following the lead of and supporting poor and working-class communities and communities of color in order to build power, long-term structural change, and an equitable future for everyone. Guided by these values, our community can take action now by: