Why RG organizes partners of young people with wealth? (and some of the reasons it's awesome for rich kids like me!)

Why RG organizes partners of young people with wealth? (and some of the reasons it's awesome for rich kids like me!) 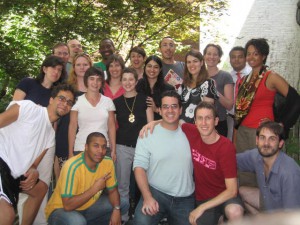 Sweet pic of RG's cross-class board from 2009

There are lots of variations on these messages. The end result is that often, we, wealthy folks become disconnected and isolated from other people and community, see our money as safety and security, believe that we are smarter and have better thinking than others, and don’t have many spaces where we feel comfortable talking about money, wealth and class openly. This is where RG comes in. We have lots of experience supporting young wealthy people to become more confident, comfortable and bold in aligning their values with their wealth. We have lots of experience moving young wealthy people from isolation to action, from silence to storytelling. We have lots of experience countering many of the messages above, letting the young and wealthy know that they belong with people, in community, can talk about their money, move it in alignment with their values and are really truly, no better and no worse than anyone else. Phew, that’s a mouthful.
2. RG participants and constituents have, since our founding, mostly been white inheritors who grew up wealthy. I am one of those white, inheritors who grew up wealthy. We, both individually and as a community, have so much to learn about how to create the relationships, community and movements we want from people raised poor, working and middle class.
People who are (or were raised) poor, working and middle class know lots of the most important things about how we create the lives and community and world I want and am organizing for. As a kid raised in a wealthy family, going to small, mostly wealthy, private schools my whole life, I don’t have a lot of practice or models for how to be a part of healthy cross-class relationships, community and movements.
Some things I’ve learned so far from some of my close relationships with people from other class backgrounds…