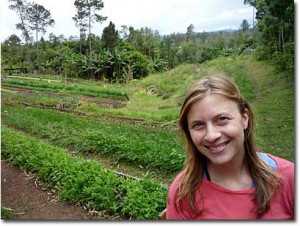 Reposted from the Vassar Alumni Newsletter
When Zoe Lloyd Foxley graduated from Vassar in 2001, she set out on a course of service to community, first as an elementary school teacher, and then, after earning a Masters from the University of Southern California’s School of Social Work, as a worker at a community mental health agency in Santa Monica. Meanwhile, she’s been deeply involved in service of another kind – as a member of the board of directors of two family foundations.
Foxley sits on the board of the General Service Foundation, a non-profit focused on human rights, economic justice, and reproductive justice, founded by her great-grandparents 65 years ago. For eight years she’s also served on the board of the John M. Lloyd Foundation, named in honor of her uncle, who died from HIV/AIDS complications in 1991. Earlier this year she was named chair of the board, taking the helm from her father, Robert Estrin. “It’s a great honor to be leading the family foundation that was started in my uncle’s honor,” she says, “and an opportunity to not only continue the important work of advocacy in the HIV/AIDS field, but also to promote the importance of generational leadership transition within a family foundation.”
In both a literal and a metaphorical sense, Foxley is continuing her family’s legacy of foundation philanthropy. It’s a commitment strengthened by her participation in the programs of Resource Generation, a non-profit focused on helping “young people with financial wealth to leverage resources and privilege for social change,” according to its mission statement. (Michael Gast ’02 serves as its co-director.) Foxley also benefits from the influence and leadership of her mother, Mary Lloyd Estrin ’66, a current member of Vassar’s Board of Trustees, as well as the boards at the General Service and John M. Lloyd foundations.
“I feel very privileged to be raised in a family that values social change philanthropy through the medium of family foundations,” Foxley explains. “I’m committed to this work for my lifetime.” – PB