Reflections from an RG Fundraising Training

Reflections from an RG Fundraising Training 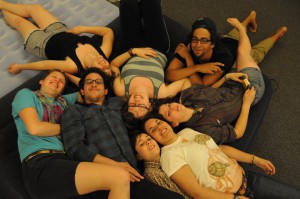 Several members of the Migrant Justice Solidarity Working Group (now renamed Hummingbird Collective) recently attended a fundraising training at RG’s New York office. The training was facilitated by grassroots fundraising smarties Yasmeen Perez and Emily Nepon, both of whom have been doing grassroots fundraising for over 10 years, and who have done this work professionally for FIERCE and Sylvia Rivera Law Project, respectively. (By the way, if you don’t know these two orgs, check them out. They’re amazing.)
We were really excited to gain concrete skills that we can use as we embark on fundraising for migrant justice organizing in Arizona. As a group, we’ve done very little fundraising, and the project of asking for money has, at times, felt pretty daunting and mysterious. Amazingly(!), it turns out that there are very concrete skills and tactics that go into this stuff. I’m feeling mad grateful to everyone who has spent years and years developing this art. Here are 6 reflections from our training:
1. When we fundraise people, we are giving them a gift. When we ask someone to contribute money, we are opening up an opportunity for that person to engage in amazing work, and that feels really good. Donors are never just giving something away for nothing in return—fundraising is a transaction. Donors give money to support work that is bettering their lives and their communities.
2. As class privileged people with a commitment to social justice, developing our fundraising skills is an important part of being accountable. Part of our unique work is to help our communities show up as donors for work led by folks most effected by injustice. A question I’m asking myself is: How can we get more folks in the RG community trained in fundraising?
3. Anyone can fundraise, and we can fundraise everyone! I sometimes get a bit of tunnel vision around the idea of leveraging my access to wealthy communities, which can translate into the idea that we can only be effective fundraisers if we have access to wealthy people. Though there are important ways to strategically use our positions in wealthy communities, it’s important to remember that anyone can fundraise, and we can fundraise everyone! Grassroots fundraising fundamentally depends on the broad-based support of an entire community, no matter how wealthy or poor. It’s a model that accesses but doesn’t rely heavily on consolidated wealth like foundations or wealthy donors.
4. If you want to raise money, you have to ask. This is the number one principle of grassroots fundraising.  Okay, so this seems really obvious, but I think it’s totally useful. I feel uncomfortable asking people for money, and this simple statement is telling us: Just ask. Inevitably, a lot of people will turn you down, and inevitably, a lot of people will step up.
5. Not all fundraising is equal. Our trainers shared this great “choosing an effective strategy” chart that helped us understand the differences between different kinds of fundraising. Basically, there are two axes—one for “yield” and one for “energy.” It encourages us to think about how much energy we’re putting into a particular fundraising strategy, and how much yield we’re getting out of that in return.
For example, direct asks for money are a low-energy, high-yield method of fundraising. Great! Having a bake sale, or often, hosting a fancy gala with high overhead costs, are high-energy and often low-yield methods of fundraising. In most cases… not so smart.
6. Doing things together is (infinitely) better than doing things alone. In the process of working on funding grassroots migrant justice in AZ, I’m continually amazed by how powerful it is to engage in the work of resource redistribution as a collective. Both in the act of moving money to grassroots organizing, and by the model of doing so collectively, we resist the isolation and independence we’re taught to value as class privileged people.  Our relationships, as they manifest both politically and interpersonally, are what sustain the work.
If you want to learn more about what the Hummingbird Collective is up to or how to get involved, email me at sarahtabbott[at]gmail.com, or check out our facebook page!