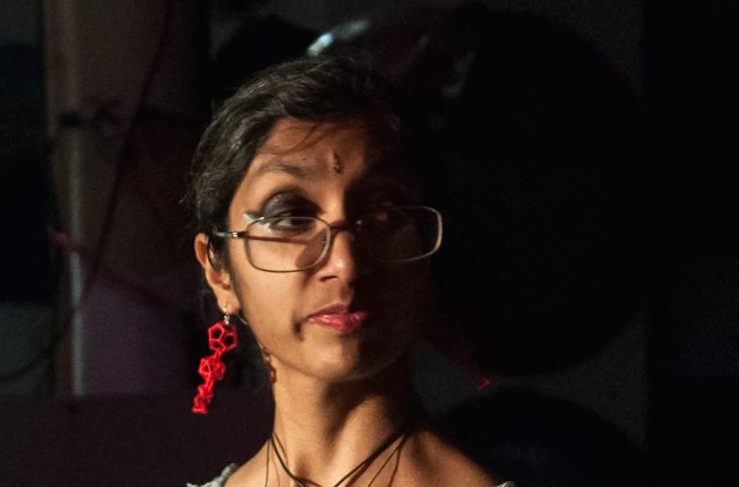 Hi, my name is Mahi.

I am part of the host-committee for MMMC 2015.
I will tell you about my involvement with RG and MMMC 2014 last year.
When I moved to Colorado, it was because of money.
I couldn’t find a job as an engineer in Minneapolis, Minnesota and didn’t have an income.
So, I married a white, heterosexual, cis-gendered man and left.
My parents have wealth.
I stand to inherit wealth, and don’t have direct access to wealth.
(I learned to say these lines confidently after attending MMMC 2014.)
So, when I moved to Colorado, I was lonely.
I learned about RG through a South Asian listserv, and I joined.
I developed an RG crush on our chapter leader Mac Liman.
Our relationship was activist polite.
Then suddenly she began calling. A lot.
“Hey, Mahi, so there is this conference, it is called MMMC….I think you should go!!!”
“Ummm, ok.”   Wow, Mac is calling me. A lot! She grows chickens in her shower, and organized her own living cooperative, and she is actually calling me!
You can listen to how cool Mac is in this radio interview where she talks about herself and RG (click photo).

A few  days later.
“Hey Mahi, so what do you think? Are you going to go?”
I had a crush, so you know how this works.
I bought the cheapest ticket possible, called her back, and said,”Of course, I am going!”
At MMMC I shared a room with another South Asian woman whose family also built their wealth around construction.
f#@k me. I didn’t know there was another 110 lbs brown woman of Indian descent who worked in the construction industry, and was also socially conscious.  I think there might be two of us in the country.
Then I spent the next 3 days with people who were willing to gently talk about money and themselves.

Unlike my family or co-workers, noone yelled at me, noone fired me, and they actually knew how to talk, pause, listen, pause, process….
During the conference, I met many people including Pierce Delahunt.  Pierce had a vasectomy, and almost died when his parts become infected. You can read more about it here in his RG post.
However, that is not all that Pierce has done. He also came to Denver, stayed with my partner and I, and cooked a great,vegan meal while burning our good pot.  He also talked to me about ethical investing, and educated me about Yahoo finance market watch.  Then he took me to a hippie party in Northern Colorado where I made more friends.
I took him to Denver Open Media and told him to tell the world what he thought, and I would videotape it. See the video below.
Pierce is also a member of the MMMC 2015 host committee. You will see his performance live at the conference! Maybe we will see yours also!

Yes, RG and MMMC 2104 did change my life.  All for the better.
Mac said she may come to MMMC this year! I hope she does.
I hope you do also!