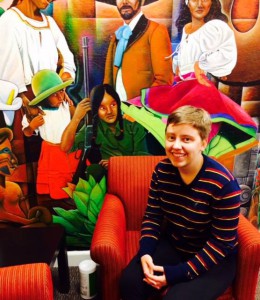 When I arrived at Stanford two years ago, I had a pretty naive view of how the world worked.  My parents worked hard so that my sister and I could go to good schools and participate in lots of extracurricular activities, and then I worked hard so I could go to a school like Stanford.  Let’s just say that my white upper-class upbringing didn’t teach me much about global systems of oppression.

During my first year of college, my understanding of the world changed drastically.  In my dorm, talking about identity, discrimination, and injustice late into the night was common. We discussed really tough subjects I had never paid much attention before, like sexual assault and the racial wealth divide.

Often these conversations were incredibly uncomfortable.  My peers would share with me their experiences with poverty or domestic violence or racial profiling and I would have no idea what to do or say in response. My temptation was to say “I totally understand” but I really didn’t.

These conversations also challenged me because I really wanted to empathize with the people experiencing these forms of oppression, but I knew my identity was much more similar to the people in power in these situations.  One night someone asked a question along the lines of “can you believe that some people think undocumented immigrants are stealing jobs from Americans?”  Which I could believe, because I had met a lot of people who believed this – and most of them shared my racial and socioeconomic identities.  In that moment I really wanted to engage with my peers to try and understand why “my people” had such a different understanding of the world than “their people.”  But instead I felt really terrified jumping into the conversation precisely because of my upper-class white identity.  I was terrified of saying the wrong things and losing my new friends and making my living situation dreadful.

I was coming to understand in my head and feel in my heart that we are all hurt by injustice in all its forms, and therefore we all have something to gain from realizing justice.  But I had no clue what I should do with this understanding because I felt like I shared more identities with the oppressors than the oppressed.

Then I found RG.  It was kind of like love at first sight, except it was more like “I don’t think this is for me — I’m not rich enough!” followed by deep love and affection. I held on through my first Praxis Group, and now here I am — a full-fledged Chapter Organizer!

One really cool thing about working with RG is that I don’t have to feel powerless anymore.  At Stanford we’re often encouraged to and told we will “change the world” — but it’s always framed as something we’ll be able to do after finishing our degree, after becoming a leading figure in our field of study. The idea that I could work for racial and economic justice as an 18-year-old in college completely shifted my idea of what I am capable of, and what counts as change. Empowering someone to talk to their family about their financial situation is progress, giving $300 to social justice organizations is redistribution. We don’t need special letters behind our names or millions of dollars under our personal control to participate in this work. 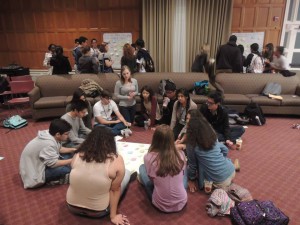 Through RG I’ve also gained a framework to understand really messed up stuff in the world. I’ve learned new language (equality, equity, and justice are different things?), heard new concepts (you mean to tell me white supremacy and capitalism are connected?), and found a community of people from a similar class background who help me navigate the journey that is being a wealthy person committed to wealth redistribution.  As Jihan Gearon of the Black Mesa Water Coalition reminded us at RG’s most recent Transformative Leadership Institute, we’re all dealing with the contradictions of capitalism every day, and we have to support each other to learn how to navigate them as best we can.

I also stuck with RG because as a young person with wealth I’ve often found it hard to deeply connect with other people from similar class backgrounds to mine.  I think a lot of us are trained to be independent to the point of isolation, and for me that’s meant a lack of identity with a strong community for most of my life. One way I’ve found community is through RG, and also by working to build community at Stanford.  For the last year I’ve been organizing both with RG and FLIP (the First-Generation and/or Low-Income Partnership) to elevate discussions about class on our campus.  I’ve helped organize two praxis groups, co-facilitate a workshop specifically for class-privileged and wealthy students, and run multiple cross-class discussions and workshops about class identity and our diverse class experiences.  Our RG chapter has reached about 30 students through praxis, and we have an email list for “class allies” across campus with over 80 members.  Being someone from a privileged background who cares about things like economic and racial justice no longer feels nearly as lonely as it did at first. 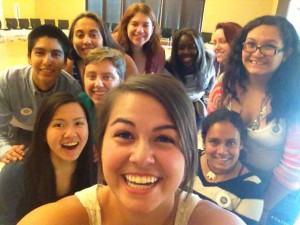 The point I’m trying to make is that you should organize with RG on your campus!  Young people with wealth are overrepresented at colleges and universities, and right now many of us are trying on new political beliefs about the world.  College organizing is incredibly important, and so much fun!

If you’re interested in bringing RG’s work to your campus, or if you’re not a student but want to support this work, please check out RG’s new College Organizing webpage and guide!