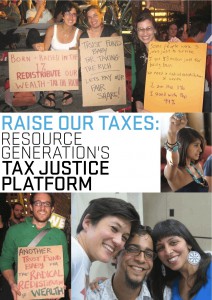 In this context, on Tax Day, we launched RG’s  new Tax Justice Platform, and a campaign to eliminate a special low tax rate for rich people by taxing Capital Gains and Dividends–profits from the stocks, bonds, mutual funds and corporate payouts to shareholders–at the same rate as wages and salaries.
RG members, alumni, and supporters from around the country called their representatives, demanding that we raise taxes on the rich instead of making cuts to the social programs that build strong and healthy communities.
QUICK FACTS ON THE CAPITAL GAINS AND DIVIDENDS TAX
The Capital Gains and Dividends Tax is a special, low tax rate for wealthy people that exponentially increases wealth disparity with each new generation.  Download our capital gains factsheet here!
Capital Gains are the profit made from selling things like stocks, bonds, mutual funds, and homes that have increased in value over time. For example, if you buy a stock for $10 and then sell it for $100, your Capital Gain is $90.

Coming Up Next….
In the next several months, the tax team will be asking members to sign on to the Tax Justice Platform, and to reach out to their networks to get friends, family members, and other wealthy people in our lives to do the same.
Click here to download the platform and sign on!   Here’s a preview:
We want to live in a world where our friends, neighbors, and family members have enough, and hoarding wealth is not an option. We think raising taxes on the rich can get us closer to that dream: A world in which we all have access to healthy food, quality education and healthcare, reliable public transportation, meaningful work, vibrant cultural practices and community centers, and clean air, soil and water. Where we all live in strong communities that are interdependent, creative, and resilient, and we collectively make the decisions that impact our lives.
Isaac Lev Szmonko, Campaign Organizer