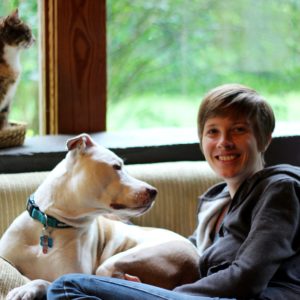 Jes with two of her housemates, Delilah the dog and Rosalina the cat.

I am a bit of a gambler. Had you asked me at any point what are the odds that you’ll work for an organization that organizes rich people, I would have bet against it. The odds were incredibly low. And yet, Resource Generation organizes young people with wealth, and I organize Resource Generation’s retreats.

When I started this job I brought with me a lot of working-class pride, southern geniality and a misguided notion that I had a somewhat solid comprehension of class in this country. A year later, I am humbled by how much I’ve learned and curious how vast the unknowns of my oblivion still are. You simply cannot know what you do not know. I want to share a few reflections on what I’ve learned about class, economics and possibility in this time. I do not claim any of these learnings to be original. This is some of what I, from my particular vantage point in the world, am contemplating. Here are ten reflections thus far, the first 5 are personal learnings and second 5 are political lessons, for whatever that distinction is worth.

This job is my first (temporary) experience of economic security. I am changed in my physiology by not subtly being in a constant state of constriction that lack of money perpetuates. I feel it in body and I see it in loved ones; there are more options available (in all ways) when there is buffer from the immediate hardships that poverty generates. This is not to pathologize or overly generalize but to put framing on something pie charts do not cover, something unquantifiable; having or not having resources impacts us on a cellular level. It is from this bodily knowledge that I now understand the imperative of radical wealth redistribution.

Young people who have money (usually inheritance or trust funds) and want to redistribute it fret over “what is enough?” to keep for yourself. The line for many seems to be ever shifting and constructed on theoreticals. I should keep x amount because eventually I’ll want to buy a house, parent a child, etc. The orientation is directed up and the ceiling just keeps getting higher. For people without class privilege, the question more often centers around what can I do without? I could get rid of x (NetFlix, cell phone, insurance etc) then I’ll have fewer bills. The orientation is down and the floor keeps getting lower. The goal is to make what you have be “enough”, which sometimes it is and sometimes it isn’t. It had never occurred to me that people are orientating towards “enough” as how much unearned inheritance is okay to keep. That concept is hinged on a totally different paradigm. As I move into having more money than I’ve ever had, I understand that it is crucial that I keep my gaze looking out and down in alignment with the majority of the world cause if I look up, I quickly feel like I don’t have enough. I know that’s not true.

All of my training has taught me that you make decisions holding finances as the central component. Thinking about living with a partner, how much would it save on rent?; thinking about going to a conference, how much will it cost to get there? When money is not the determining factor, the process is totally different. The question seems to be more like, what do you most want?, what would be best for the _____ (organization, relationship, etc)? Having the space to ask different questions often leads to different answers. I understand then that the truest yeses are the ones that are clear regardless of finances. Those yeses for me are few, far between and precious.

In a myriad of little ways individualism is reinforced through access to resources. You don’t have to ask for a ride to the airport when you can pay for one, you don’t have to find someone with a truck you can borrow when you are hiring movers etc. The diminished connection to the immediate necessity of community can increase a sense of isolation and makes asking for help a confusing balance of when to call on community and when to call on resources. For people with disposable income, knowing when to ask for help requires skillful discernment between entitlement and interdependence. For me, I note that the newfound independence that disposable income provides is marked by both personal pride and a hint of loneliness.

I have money in a savings account now, I am embarrassed to admit that sometimes when I’m stressed I look at my bank account and find it soothing. I would think that this is just a weirdo quirk I alone carry, but when I’ve mentioned it to others who have some padding, many are able to relate, even people who come from generations of money. In this way and many other ways economic security can act as emotional comfort, providing a buffer such that if things are hard there’s money for counseling, for comfort food, for making it to the service or getting there in time, going on a trip when you need to get away, etc.

No one told me that the stock market is the secret portal rich people all seem to have the passcode to. When I first started working at RG one of the first things I realized was that I needed to study up on the stock market. I thought that the ticker of those imaginary numbers was something that mostly benefited brokers and execs while messing up working people’s retirement. I now understand those imaginary numbers mean that some people are making more real money off of interest from investments than most of us will know in our lifetime. There is income that comes from work and career and there is income that comes from stocks and investments, the combination of these streams invisibly changes many people’s class status and creates an ability to mask class. Rich people are trained that this is smart, that you invest in the stock market and get returns. It’s another way of looking up, to invest in portfolios rather than looking out and down and choosing to invest in community infrastructure and organizing. Many wealthy people and foundations who are giving, are giving just portions of the interest that they earn from the stock market. Giving from “principle” is considered risky by many who have something other than principle to give from.

The extent to which race and class privilege are conflated cannot be overstated. This conflation, of course, invisibilizes people of color with class privilege and white poor/working class people, it also just makes it much harder to understand what we are really working with. It seems to me that there is white fragility and there is class fragility as two separate, sometimes overlapping pieces that get mushed together. In cross class settings that are caucused by racial experience, there is a greater ability to differentiate and notice class dynamics clearly. Within these and other containers, there’s an ability begin teasing out more of an understanding of what’s what in order to more effectively combat racism and classism and how they reinforce one another.

The space between upper-class and ruling-class is really sizeable, like the space between poverty and stable working class. There is a vast amount of difference that exists between the experience of living in poverty and the experience of being stable working class–it can be the difference between sleeping on the streets and owning a home, between street-based sex work and paid time off. The difference in life experience between upper-class professionals and ruling class elites is also very extreme. It can be the difference between having lots of personal power and assets and having lots of political power and capital, between one fancy home and three. We have so few words and metrics for understanding class in the U.S., and class perception is highly contingent on geography and comparison. Understandably, we’re all using one another as our primary standard of comparison, and the class stratification we live within can intensely warp perspective. I’ve talked to people whose families own multiple homes and have over a million in assets who think of themselves as solidly middle-class and people who live in a mobile home with no savings who think of themselves as middle-class.

There is actually plenty. It’s just not distributed equitably. This is one of the more painful truths I know, that there is enough.

Reparations: a repairing or keeping in repair; the act of making amends, or giving satisfaction for a wrong or injury; something done or given as amends or satisfaction. The racialized wealth gap that we are living in today is and always has been built off of exploited labor. From enslaved labor to imprisoned labor, from broken treaties to pipelines, wage theft to deportations, regressive tax codes to huge tax breaks. The wealth that is being accumulated by a few, mostly white individuals is happening at the expense of the many. Being raised poor and white in the south, I was taught in subtle and overt ways that reparations were a ridiculous demand from people who couldn’t let go of the past. Whatever ways that white resistance to reparations seeped into me over my lifetime, a year of working at Resource Generation has graciously purged from me. I now understand as many have for a very long time, most notably members of African-American communities, that reparations are not optional, they are not an interesting topic of debate, they are necessary and way past due.
—
Jes Kelley is Resource Generation’s retreat organizer.