Outclassed: wealth, the myth of meritocracy, and affirmative action

Outclassed: wealth, the myth of meritocracy, and affirmative action

Universities have long been a political battleground representing some of the United States’ most deeply held beliefs about meritocracy, who belongs, and who is “deserving” of higher education. I’m an Asian American who attended the University of North Carolina at Chapel Hill. The political currents swirling around my alma mater land in a particular way for me as a young wealthy Asian American alumnus who cares about racial justice and whose family has benefited from affirmative action.

UNC is a public university built by enslaved Black people in 1789 and was only open to white wealthy Christian men until 1887 (when white women were admitted) and didn’t admit its first Black students until 1951. UNC has been deeply shaped by white supremacy and segregation and the measures it has taken to repair some of the harm through affirmative action are currently being challenged.

A lawsuit filed in 2014 alleges, “Sadly, Asians in particular are being discriminated against at UNC because lesser-qualified African-Americans, Hispanics — and even whites — are gaining admission at the expense of better-qualified Asians.”  (This is not true – in fall 2016 the first-year class of UNC was 14% Asian American when Asians represent about 3% of the total population of North Carolina). This is all happening in the context of the Justice Department recently indicating that it will devote resources to investigating and suing universities with affirmative action policies deemed to be “discriminatory against white applicants.” As part of its investigations, the Justice Department could take a position on the UNC case as well as a high profile lawsuit against Harvard filed in 2014 by an Asian American for discriminating against Asian Americans in the admissions process. 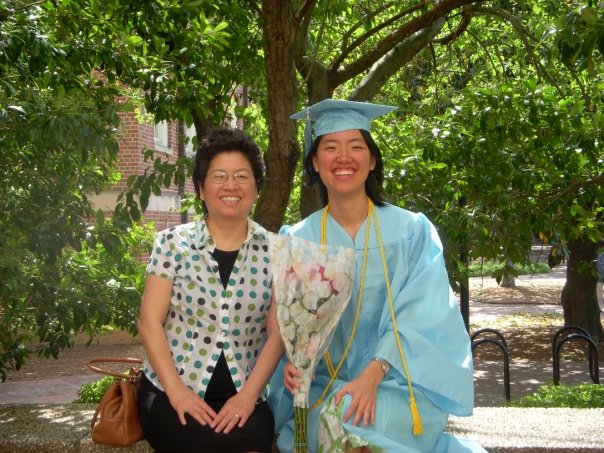 My mom and me at my graduation from UNC

I can’t mention the intersection of wealth and college admissions without addressing legacy admissions. Legacy admissions, or the practice of giving preference to the family members of alumni, has a sordid anti-Semitic history as a way to keep Jews out of top universities. Today, Ivy League schools typically admit legacy students at 2-5 times the normal acceptance rate, a huge advantage for overwhelmingly wealthy and white legacy students. Legacy admissions are fundamentally unfair and classist. What few routes exist for poor and working students and people of color to access higher education through affirmative action are being dismantled and defunded by overwhelmingly white and wealthy politicians, while policies like legacy admissions continue to funnel wealthy people to elite universities. This is all part of the larger trend we’ve seen of defunding the social safety net to enrich the wealthy.

Resource Generation represents a base of people who are overwhelmingly college-educated. For all of the violent history and extreme wealth accumulation that colleges and universities represent, they also have always been sites of resistance, with students being a key part of every major social movement. As students and alumni we have a responsibility to act in solidarity with poor and working class folks and people of color on and off campus. Colleges and universities will continue to be sites of struggle and resistance, from the Pokanoket Nation reclaiming its ancestral lands from Brown University to the courageous students who took a stand against white supremacists and neo-Nazis at the University of Virginia, to the students at my own alma mater who have renewed their protest against Silent Sam, the Confederate statue prominently displayed on the upper quad.

Universities have been — and do — intentionally give more privilege and power to those who already have it. A college education is becoming more and more inaccessible to poor and working class students (unless they go into sinkholes of debt). But universities are also sites of struggle where we can tackle the myth of meritocracy head on. As an organization of young wealthy people, we need to challenge the systems and narratives that reinforce classism and position the wealthy as more deserving and belonging to academia than poor and working class communities. By fighting for affirmative action, dismantling legacy admissions, forgiving student debt, and advocating for free tuition for all, we — young people with wealth — have a role to play in ensuring higher education is truly accessible and liberatory.