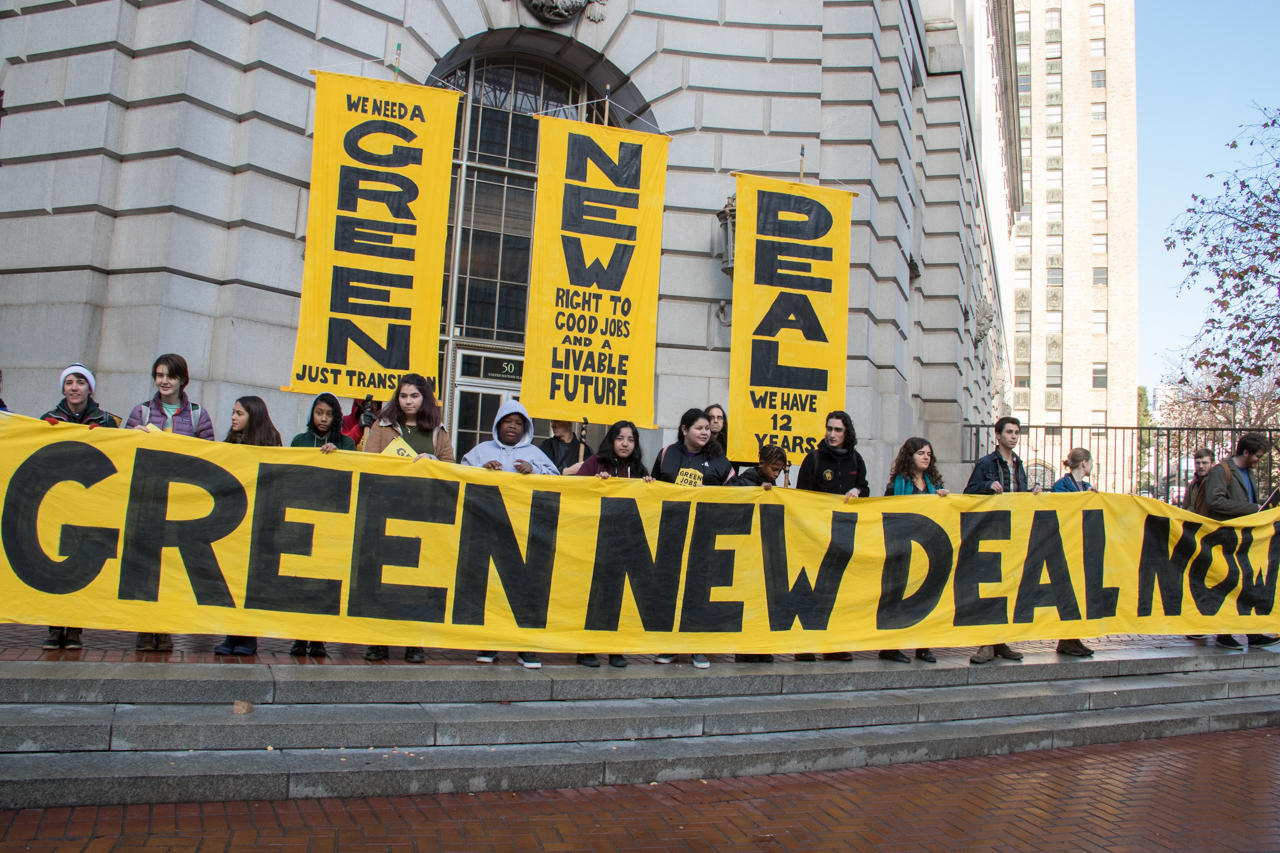 The excitement around the Green New Deal is a big deal. It is polling with massive popularity among young people, and, critically, would strengthen the power of the labor movement through policies aimed at working toward climate justice with economic justice simultaneously.

Climate justice, as inextricable from racial and economic justice, is an essential part of our vision for an equitable distribution of wealth, land, and power, and a world in which all communities are powerful, healthy, and living in alignment with the planet.

So, we’re very excited by the resolution in Congress from Rep. Alexandria Ocasio-Cortez and Sen. Edward J. Markey calling for a Green New Deal, which includes reaching net-zero emissions in 10 years as well as a job guarantee, universal health care, universal housing, and yep, that 70% marginal income tax rate. Although the resolution does not have the force of law, we are excited by the progressive vision and opportunities it presents movements.

The ‘New Deal’ part of ‘Green New Deal’ is a reference to the New Deal under President Roosevelt during the Great Depression when the government — in response to massive poor and working-class led populist movements — created jobs (public, not private jobs!) to help address economic insecurity. These jobs were largely intended to help the collective (i.e., the Pacific Coast Highway, to building airports, roads, and hospitals, to creating public parks and other art and infrastructure projects), and also created many public programs to benefit poor and working-class people, such as Social Security, Social Security Disability Insurance, federal housing regulation, and public works. All of that and more is possible in our generation.

The energy around a ‘Green New Deal’ is an invitation to build our community of young folks with access to wealth committed to economic, racial, and social justice.

Discuss with your friends and family members about how their class privilege affects environmental activism. Environmental justice is super popular among young folks, and the ‘environmental movement’ has taken a lot of justified heat for being a majority-white space led by white and often class-privileged, cis men (in other words, those most insulated from the worst impacts of climate change).

As a community of young people with class privilege and access to wealth, we, grimly, financially benefit from the climate crisis; our families’ wealth, personal incomes, and/or investment portfolios are often connected to the fossil fuel industry. Globally and locally, poor and working-class people, people of color, and Indigenous people are disproportionately harmed by the violence of climate change, and it is essential for us to continue to practice solidarity and center the voices of those most impacted as the Green New Deal develops.

For those of us with class privilege and/or access to wealth, being in solidarity with poor and working-class led environmental movements might look like taking up fewer leadership roles (paid or unpaid) and instead figure out how to support the leadership of frontline organizations led by those hurt first and worst by extractive industries and rich-humans-and-industry-caused climate crises.

Always be amplifying the leadership of frontline-led environmental organizations!

We think the readings and resources below are great ways to learn more about our role as people with privilege in broader social justice movements.

Let’s build on that Green New Deal energy by talking to your friends and family about the importance and urgency of building the power of community organizations who will be able to hold the politicians who enact a Green New Deal accountable to poor and working-class led movements for economic and racial justice.