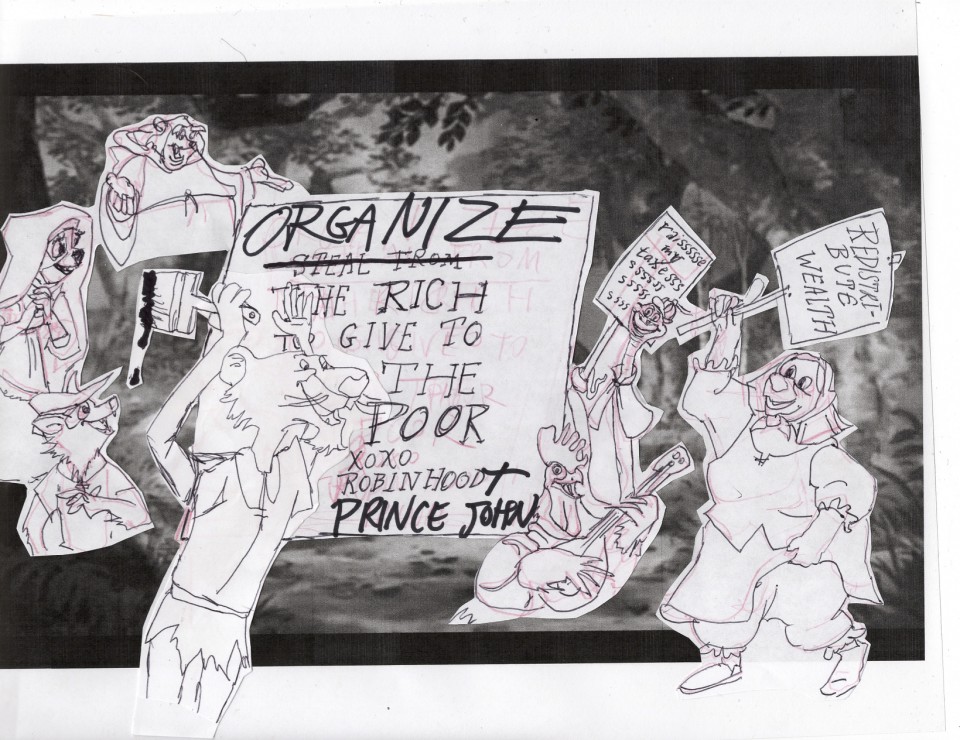 In this EXCLUSIVE INTERVIEW, Robin Hood talks with Prince John about his recent transformation and decision to join a movement to redistribute wealth on a massive scale.

Robin Hood:  Let’s get right to the point here, Prince John.  Tell us, what’s behind your recent political shift?

Prince John:  Well, Robin, after years of hoarding and thinking that I alone was responsible for earning my wealth and ruling the kingdom, my brother Richard came back from the Crusades and shared with me that he had joined an organization of wealthy kings with social justice values.  At first I tried to have him beheaded at the suggestion of Sir Hissss, but after deep reflection I realized that I want to be part of a socially just world, and find love and joy in community.

RH:  That makes sense.  And what are you planning to do now?  Are you passing out gems at the gate?

PR:  Actually, Robin, I’ve learned that organizing is the most powerful tool for transforming our society.  My fellow kings visited last month and we had a visioning retreat where we concluded that equitable taxation was the best tool for us to redistribute our wealth on a kingdom-wide scale.

So now, instead of sending out my tax collectors to the poor villages, I’m welcoming them into my treasury to collect what we need for schools, hospitals and housing. We’ve found it’s much easier to run kingdoms using resources of wealthy noble people like myself, rather than chasing and imprisoning the poor.

RH:  Interesting.  And what would you recommend other rich kings and noble people do?

PJ:  I know how isolating it can be to tackle these issues in your throne room by yourself.  There is some collective action happening right now that other kings and noble people should join.  They should speak up through this campaign  in favor of a Robin Hood tax bill that would put a small tax on certain Wall Street transactions and raise billions of dollars.  They should also get three of their fellow kings to participate in the campaign.  Finally, they should identify work in their local villages that would benefit from more resources, and make the connection to more equitable taxation as they talk to members of their community.

RH:  Ok, John — I see opportunities for cross class alliances here.  Would you like to join the Merry Men and Women for our potluck on Sunday?  We’re raising money for housing homeless trans teens.

This tax season, we are using our class background  to shift the narrative around what it means to be taxed.  We want to build momentum for transforming the tax structure, and use our power to advocate for increasing taxes on the rich in order to redistribute resources and support the public good.

As a country we’re not taxing wealth. Right now our effective Income tax is greater than the capital gains tax or the wealth tax.   Making things worse, congress has voted to eliminate the estate tax–one of the only tools we have for redistributing WEALTH versus redistributing INCOME. We have to ask ourselves why?  Why do we ask everyone in our country to pay their fair share for the common good,  except rich people?  Why do we reward the accumulation of wealth, while squeezing working and middle class families with higher taxes and lower social services?

As young people with wealth, committed to social justice, we understand we need to organize with Robin Hood. Not just as a part of the band of Merry Men, but as a Prince John, a publicly visible rich person who can organize with peers to demand increased taxes and increased public services. We recognize that taxing us is going to lead to a more economically just world. We want to be taxed more because we believe in justice.

To all rich people who support Robin Hood:  #redistributeMYwealth