By Maggie Heraty and David Roswell of RG North Carolina
As Resource Generation North Carolina has grown in numbers and deepened in scope, we have recognized the need to strengthen our base and be more public and active in our community. In Fall 2015 we hosted two events to help meet these needs. Our hope was to both recruit new members and build energy as well as share in the existing public conversation in Durham around and social justice from our perspective as young people with wealth. We want to share our success story with other chapters interested in hosting similar events or going public in their communities. Please reach out to us if you have any questions or want to learn more: [email protected]! 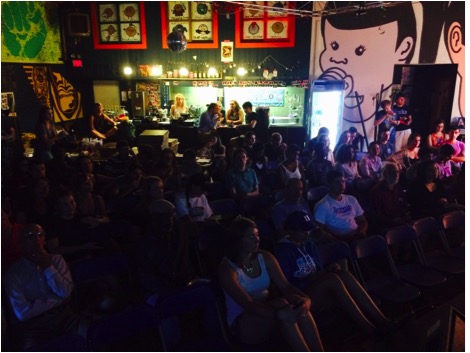 A full house at the screening of Inequality for All at The Duke Coffeehouse.

In September we hosted a public screening of the documentary Inequality for All, a film following former Labor Secretary Robert Reich as he examines the unequal distribution of wealth in the United States today screening was free and open to the public, and was provided. We advertised the event to Duke University students and to Durham community members through postering, reaching out to social justice organizations and clubs, and word of mouth. This event set the stage for us to begin a conversation about wealth and class and was the first place where we went public as a chapter.

Shortly after the screening, RG North Carolina hosted a workshop called “Created Equal: How Class Matters in Our Lives and Communities,” in which we created an engaging space focused on helping participants to examine their own class stories, to place their stories in a national and historical context, and to gain a foundation in the history of the racial wealth divide in the United States. We partnered with Class Action, a nonprofit dedicated to challenging classism in organizations and communities, to facilitate and develop the content of the workshop. Approximately (!!!) people attended the free workshop. We were thrilled at the diversity of the attendees; we had a balance of students and community members, a broad age range, racial diversity, as well as people with many class experiences. 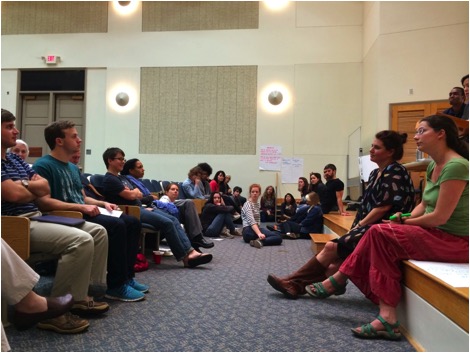 We focused the content and the publicity for the workshop to ensure it would be a space. We wanted to create a space where class and classism could be discussed that allowed all individuals to feel heard. We hoped that in sharing our stories, we could all realize that class isn’t just about numbers, it’s about people’s lived experiences and struggles. We also hoped to enter and share in the conversations already happening and to be a part of the diverse social justice community in Durham. We reached out to local organizations and activists focused on economic, social, and racial justice and those working with communities. We advertised to both Durham community members on listservs as well as to students at local universities. We invited clubs and organizations on Duke’s campus, including the Duke Center for Multicultural Affairs and the Duke Human Rights Center, and postered at university campuses across the Triangle. Brainstorming within our local RG membership to identify specific groups to reach out to was very helpful for us.

The workshop was free, and we provided so that participants would not feel hindered to attend because of a fee or because of missing a meal (we also know from experience that college students like to attend events with free food). We hosted the workshop at Duke, the major private university in Durham, because we could secure a large meeting space for free and because we knew that holding it on campus would mobilize students who are likely RG constituents.

Two amazing Class Action trainers, Shane Lloyd, from Brown University’s Center for Students of Color, and Theo Yang Copley, an RG alum, facilitated the workshop. We collaborated closely with Theo and Shane on the content, to ensure that the workshop would reflect the needs of our chapter as well as the needs of the community. The workshop included three parts: an exercise exploring the distribution of wealth in the U.S. across time and its connections to the racial wealth divide; a personal storytelling activity where participants shared their class story in to the education, work, and migration patterns of their family (similar to RG’s money story activity); and breakout groups where participants could discuss various topics ranging from how to build stronger alliances across class and race to how classism and racism manifest in their life and work.

Workshop attendees act as quintiles in a “human graph” of the distribution of wealth in the U.S. today.

Throughout the workshop, we presented Generation and the work we do while keeping it inclusive to those who do not identify as young people with wealth. Theo, when presenting her class story at the beginning of the workshop, talked about her experience with RG and the impact it has had on her and her work. Shane also presented his class story with complexity and deep analysis of the intersections of class and race in his life. Additionally, at the beginning of the workshop, we explained that the event was hosted by RG.

In our follow up emails, sent to all attendees, we provided people with a list of local organizations that do economic and racial justice work, as well as information about RG. On the sign-in sheet, attendees signed up to learn more about RG, and we sent personalized emails to each of them, offering to do a 1:1. We’re hoping that many of these people will join us at the Open House we’re hosting in January.

The two events cost us a total of $3,000. This included paying for the trainers, film rights, pizza for all attendees at both events, and posters. We used the $500 allotted to each RG chapter, but obviously needed more than that. Instead of seeing this as a , we asked our chapter members to help fund the two workshops. Impressively, many people stepped and threw in $200- $600. In the future, we’d like to find a better way to fund chapter and are currently talking to RG national about options.

In reflection, our chapter felt as though it accomplished the two goals of starting a community conversation around class and of building our base. Several attendees talked about how liberating it was to talk openly about their class experience. Many conversations in the room demonstrated new and deep thinking around class and race. Our chapter gained a new understanding of what we’re capable of and saw at least one way we can leverage our resources for social change. In terms of recruiting, we’re still unsure of how successful it will be. Though we sent many emails out, we have had a low response rate to date, but we plan to keep engaging participants with events like the Open House.

Our chapter still has a lot of growing to do. We want to show up more as a chapter – to stand in solidarity with others working for racial and economic justice. We are currently in the process of identifying a local organization to partner with, a process we hope to complete by early 2016. Still, as a first step, the screening and workshop did wonders to push our chapter, and to move us along a journey towards bold action in our community as individuals and as a group.