What Future Do You Hunger For?

What Future Do You Hunger For? 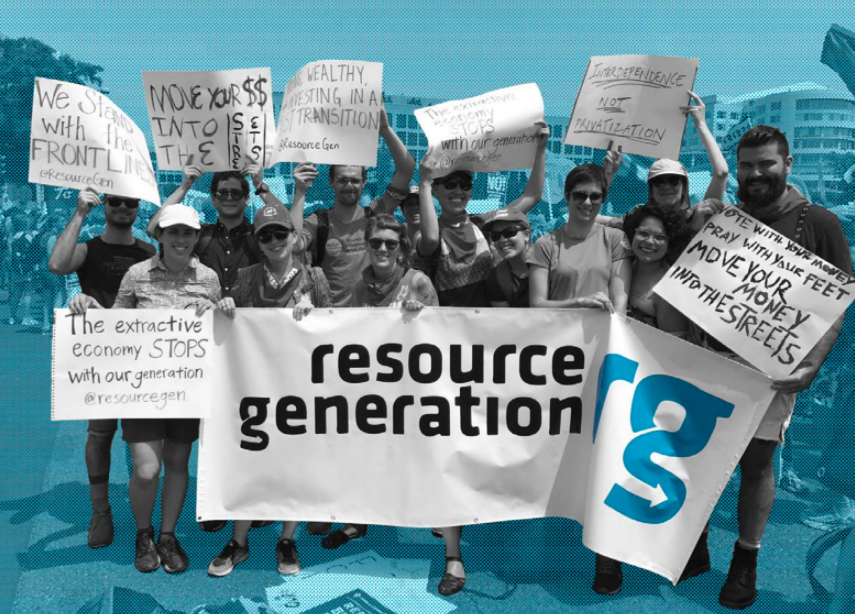 Imagine a world in which thousands and thousands of young people with access to current, earned, future or family wealth have joined us as members of Resource Generation.

We’re moving millions and millions to grassroots movements, organizing our families, challenging classism and wealth hoarding, being public about class, and taking collective action with poor and working class-led organizations to shift systems on a large scale.

That world is possible within the next 20 years if we want it.

Will you join, renew, or increase your giving to RG at membership-dues that meaningfully reflect your financial situation?

Resource Generation’s 20th anniversary is this year. Through the trials of adolescence as an organization, we are settling into our identity: member-powered, visible, accountable to poor and working-class communities through campaigns for systemic change, and organizing our members to move from charity to redistribution.

Last year we raised $1.2M in membership dues. Because we organize our members to give at least 9-times their membership dues to movements, together they moved at least $10.8M to movements last year alone. Our members give on average sixteen-times more money to social justice than they did before joining RG. A lot of our members increase their giving by a lot more than that, too. That’s millions to poor and working-class led grassroots movements building power to create a world where everyone can thrive, live with self-determination, and dignity. That future — where white supremacy and capitalism are in the rearview mirror — is the future I am hungry for. It’s a future I had only started to imagine when I was twenty.

At 20 years old, I was a student at UNC-Chapel Hill, learning how my personal experiences of racism and sexism were connected to systems. I was starting to find support and healing for all the ways I had made myself small to find safety. I had just come out as queer. I still remember the distinct feeling of vertigo when I was coming out — the embodied change in perspective and possibilities for my future made me unsteady on my feet. I felt a sense of freedom from the confines of heterosexism and the gender binary. My body resounded with the message: It doesn’t have to be this way. There is another path forward.

That message is what drew me to community organizing. As Grace Lee Boggs said, “Building community is to the collective as spiritual practice is to the individual.” In my spiritual search for healing and wholeness, which required confronting systems of violence and oppression, I was lucky enough to find movement homes, from Southerners on New Ground to the National Queer Asian Pacific Islander Alliance to Resource Generation. These homes have taught me the same lessons as my spiritual practice of Buddhism: that there is a path to ending suffering and finding liberation.

That path is based in transformation, interdependence, and action. It requires grasping problems at their root and doing something about it. I joined Resource Generation as a member five years ago because of a nagging sense that wealth inequality was at the root of so much violence, and knowing that as someone with wealth, I wasn’t doing much, if anything, about it. Before joining RG, I did not have a giving plan and was giving sporadic one-time gifts of less than $100, mostly in response to fundraising asks from my friends. Today, as Resource Generation’s Executive Director, I am on track to redistributing $18,000 this year (about 10% of my net assets) and am making plans to continue to increase my giving.
RG has catalyzed my giving, changed my relationship with my parents around their wealth, and perhaps most importantly, awakened me from my deep misunderstanding that I could be silent about (my) class and still be effective in racial and economic justice movements.

Being a member of RG also exposed me to how capitalism and classism are dehumanizing for all of us, and causes deep spiritual, emotional, and psychological harm to wealthy people in the form of fostering fear, isolation, hyper-individualism, dissociation, and a false sense of scarcity. However, this is not comparable to the material harm and violence waged systemically on poor and working-class people’s lives, yet I know in my bones that wealth accumulation — like any system that confers benefits through the exploitation and harm of others — erodes our ability to be fully human. So, the message I have for wealthy people is this: It doesn’t have to be this way. There is another path forward.

Twenty years ago RG’s founders acted on that message. Twenty years from now, if we want to reclaim our humanity and live in a world in which all communities are powerful, healthy, and living in alignment with the planet, then we need to stick to the path of transformation, interdependence, and action — for the long haul.

Join, renew, or increase your giving to RG at membership-dues that meaningfully reflect your financial situation here.
I hope you‘ll be with us on this path toward collective liberation.
—
If you need help figuring out your class background, check out our definition of wealth and/or fill out this intake form to have one our national organizers reach out to you.
—