How will you Invest in a Just Transition?

How will you Invest in a Just Transition?

This story originally appeared on the Regenerative Finance website.
Wowzers! Regenerative Finance just got back from Resource Generation’s annual conference Making Money Make Change (MMMC) and we are feeling inspired to act, excited to follow-through on commitments and challenged to dig deeper in confronting racism in our economy and in our lives.
This year Regenerative Finance partnered with Resource Generation on the Igniting Action booth. The purpose of the booth was to allow participants (who spent 4 days exploring how to leverage their access to resources towards a just and equitable world) to ground their learning and commit to taking action in the world!

Through this exercise we tried to demystify finance and show the ways it distances us from our complicit participation in the extractive economy. When we draw connections–from mountaintop removal to luxury gated communities to prison labor–we can better understand what we mean when we say “extractive.” Similarly, as we imagine and visualize the economy that we want and need, we can take inspiration from the work that many are already doing, and set bold goals to help us get there. We were thrilled to partner with Resource Generation on this project, as their recently released 40 year campaign vision is very aligned with this shift. At MMMC we collectively visualized what is possible when we organize to invest resources in a just transition together, and our collective commitments embody a small but significant step towards shifting control of capital. 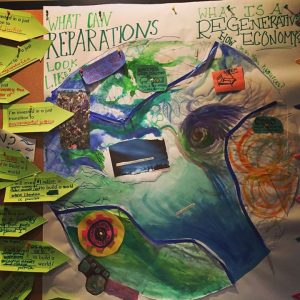 As pictured, we had two maps in conversation with one another. On the left was the extractive economy, and on the right was the just, sustainable, democratic economy we are growing towards. The goal was to have people draw a connection between their vision for a healing, sustainable economy and their investments. We define investments as resources (time, energy, money, love) that can be put towards something in order to create change. This definition moves beyond the mainstream understanding of investments strictly as putting your money towards something in exchange for financial return. We asked people to center racial justice as they identified how their money was accumulated and then pledged to make investments that could heal the legacies of harm that exist as a result of wealth accumulation.
And participants leaned in…

P.S. If you’d like to see the lengths we went to for a just transition and to recruit folks to participate in the igniting action booth–check out this video of us singing at dinner.