How Do We Learn to Give?: On Giving to the It Starts Today Campaign

How Do We Learn to Give?: On Giving to the It Starts Today Campaign

It is rare indeed that people give. Most people guard and keep; they suppose it is they themselves that they are guarding and keeping, whereas what they are actually guarding and keeping is their system of reality and what they assume themselves to be. One can give nothing whatever without giving oneself—that is to say, risking oneself. If one cannot risk oneself, then one is simply incapable of giving. And, after all, one can give freedom only by setting someone free.

– James Baldwin, The Fire Next Time 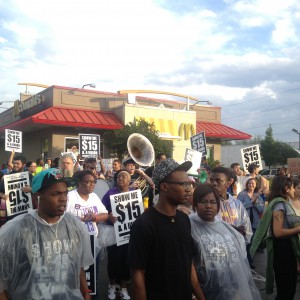 I’ve been thinking about this James Baldwin quote in relationship to philanthropy for the past two years and it has come up even more strongly through the It Starts Today Campaign and our task to raise $1 million for Black lead organizing. What does it mean for me to give? I have money that I was taught to give away philanthropically from an early age. Yet, I’ve never felt that Baldwin was calling me to simply write checks to organizations that I have a connection to or that move me. This is a type of giving, but I do not believe that this is the type of gift that requires the vulnerability that could lead to liberation, to connection, to freedom.
In the past few weeks Mumia Abu Jamal was moved to the ICU unit in Pottsville after thirty years of solitary confinement and improper medical care. When his family arrived, they were not allowed to see him for days. A few days later, a report was released about black teachers being arrested in Atlanta for supposedly helping students cheat on tests, tests that are part of an education movement that focuses on black and brown children’s education and often equates a child’s test score to their worth as a human. A few days later, Walter Scott was shot in the back eight times while fleeing a white cop. After Scott was shot, he was handcuffed lying on the ground, dying. The cop has been charged with murder, a rarity in the series (and history) of non-indictments of cops who kill black people, yet one charge does not change the fact that violence occurs at so many levels against black people in this country. This is the way the system works. (I started this post two weeks and I have to keep adding to it because it’s not stopping, the list just keeps getting longer. #RekiaBoyd #FreddieGray #Baltimore)
On April 15th, tax day, I marched with a group of laborers, activists, and citizens in New Orleans as part of the Fight for $15 campaign, in partnership with the local organization Stand with Dignity. In New Orleans, minimum wage is $7.25. We walked into a McDonald’s on North Carrollton St. and shut it down as other laborers and supporters did the same across the country. Nearly a hundred people filled the McDonald’s chanting, singing, and building solidarity.


As RGers, we too are part of this struggle.

It Starts Today is a campaign not just about raising money, but about working together to understand and shift systems of oppression that condone state violence against black bodies. We must draw the connections between wealth accumulation and the very violence we are witnessing. Part of this work is shifting analysis from “I have wealth and others do not” to an analysis that lands on “I have wealth precisely because others do not.” Although my wealth was not made off of McDonald’s and laborers working $7.25, my wealth was created in a system that thinks that these labor practices are ok. Normal. Necessary. I don’t think that this is ok and certainly doesn’t lead to any sort of freedom that I can relate to.
The work of wealth redistribution, dismantling white supremacist consciousness and structures and ending state sanctioned violence against black bodies is not simple work. It is layered and complicated and tense and liberating and generative and creates spaces for beauty. It is facing the way that racial capitalism negatively affects people across the economic spectrum, even those of us who profit off the system. Since the campaign began a few months ago, I have been meeting with people in New Orleans and across the country to strategize about the campaign and my individual giving. It’s sparked conversations (and giving) from my family that I couldn’t have imagined a year ago. It’s sparked many questions too. Is it best to give to 501c3s? Local organizations? National organizations? Individual organizers? Black cooperative businesses? Friends and colleagues? How much is enough? How do I remain accountable and to whom? How do we create long term systems change with our resources? What does this giving mean to me and my family over time? How does this relate to shifting power? What, and how much, can I give to create the future I want?
The questions are plentiful, both for me personally and other RGers I’ve been talking to across the country, but I think that means that we are doing the work. There is not a manual for this type of work, so sometimes that means moving in ways that feel unfamiliar and destabilizing. We are developing strategies that are helping us answer the questions. Although I have always been taught to give, I don’t think I was taught to give in a way that pushes the foundation of systems that put me in a position to give. To move from a place in myself that believes in abundance stretches my commitment to justice. I have to constantly revisit the parts of myself that are comfortable with how the world works and the privileges that I have—to name those parts not to shame them, but to understand where they come from and see what fears arise in the face of change. For me, listening and understanding the resistance inside myself is part of how I can continuously work to shift consciousness and systems. I am trying to hold the fact that I can have fear and a commitment to liberation all at the same time. We are learning new ways of seeing, being, and acting and we are all imperfect.
I am giving the most that I have ever given in a year to this campaign to Black-led liberation organizing. Giving as much as I have this year has made me realize that I can give more in the future and has been a catalyst in building relationships for long terms solidarity, struggle, and strategizing. Systems of white supremacy and racial capitalism have been developed, refined and reaffirmed for generations and the process of undoing these same systems has been under way for generations as well. Giving to Black-led, Black liberation organizing across the country is a piece of a big puzzle of transformation that our country so desperately needs. It is not everything (nothing ever is), but it is a way for us, as young wealthy people, to put ourselves out there and collectively imagine the future that lays ahead that is still unknown to us. Giving is about showing up fully in who we are and giving as much as we can with the resources that we have, financially and otherwise. We cannot give whatever without giving of ourselves and we are learning to do that together in this moment so we can more actively, creatively, and sustainably implement change on a personal and institutional level.
As Anthony Newby said on a recent webinar for the It Starts Today campaign, “Power is not a limited commodity”. I am learning to step into my power, a power that does not rely on the oppression of other people, but a power that believes in the possibility and ability to make change, with the energy and commitment to make it so.

Join us to imagine, work, and give of yourself towards a new future.

Everything now, we must assume, is in our hands; we have no right to assume otherwise. If we—and now I mean the relatively conscious whites and the relatively conscious blacks, who must, like lovers, insist on, or create, the consciousness of the others—do not falter in our duty now, we must be able, handful that we are, to end the racial nightmare, and achieve our country, and change the history of the world.

– James Baldwin, The Fire Next Time