Back to the Land: RG Organizing in a Rural Community

Back to the Land: RG Organizing in a Rural Community 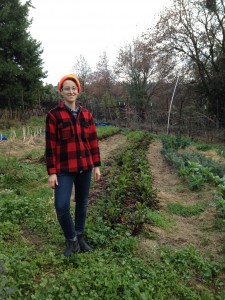 I am writing to open a conversation about what it’s like to live and work rurally and be engaged as an activist with Resource Generation.  At this point I have more questions than answers, but I hope telling my story and asking these questions may provoke some thoughts, ideas, or dialogue in the community.
This past year, for the first time in my life, I moved to the country.  The move seemed long overdue, seeing as I have been a farmer for the past 10 years of my life.  Yet I spent the bulk of my farming career living in a city and bike commuting to its outskirts, where I leased two acres and ran a CSA farm.  Since I grew up in a city and attended college in yet another city, I was compelled to live urbanly, even as my work and my interests grew increasingly rural.  I felt I needed to be in a city to have the community, camaraderie and peer network I craved.
When I became involved with Resource Generation in 2011, I found yet another reason that face-to-face camaraderie with peers felt unbelievably important.  My emerging class-consciousness and political work around privilege and economic justice vastly evolved and was propelled forward by the context, connections, and community I found within the RG network. I found a few RG peers locally, and when I moved to San Francisco in 2012, I connected with the RG community in the Bay Area.  In the Bay I felt especially invigorated by my connection to others who had similar or related owning class backgrounds and political and critical consciousness around efficacious movement work and ally-ship within this particular context.  My organizing work flourished as I diligently devoted my time and energy towards organizing my family’s foundation, organizing local praxis groups, joining the MRI fellowship, presenting at multiple mainstream as well as left philanthropic conferences, divesting and reinvesting a significant portion of my personal trust and the foundation’s endowment.  I am positive that having the broader national RG community as well as the local Bay Area one was imperative to the proliferation of this work.  It is also possible that I dove head first into a deep pool of something that is really more of a lifetime pursuit, an extended learning curve. I got burnt out, and I had to take a step back from my organizing work, both outside of and within the RG community.
This step back coincided with my move from San Francisco to a small rural community in Northern California.  Though I remain in touch and engaged with the RG community and my work therein, as I returned to a career in farming, and even further immersed myself in the rural and farming community where I live, I have struggled to feel connected to my work as an organizer and leader with Resource Generation.
There is always so much work to do: as a farmer, as an organizer, as a compassionate human being, as a member of a family, as a partner, as a queer and trans person.  It certainly feels overwhelming at times!  And since I moved to the country and reconnected to my work as a farmer, I have become increasingly attuned to all the work necessary to revitalize and regenerate the soil and properly and efficiently preserve the decreasing amounts of fresh water necessary for all biological life.  This means best practices as a farmer and ecological steward of land, and also imperative political and educative work to change the ways most food is produced in this country, and subsequently, most land and water is managed.  Which means changing the farm bill and the 4.6 billion dollar subsidies for genetically modified corn and soybeans on the millions of acres of chemically farmed land in the Midwest. This also means revitalizing local food economies, restoring watershed and salmon habitats, pollinators and wildlife populations, and advocacy at the city, county, and state levels of government for comprehensive and restorative environmental and agriculture policy.  Work must be done at every level, on the ground, or, the soil that is, and in the offices of congress people in Washington and Sacramento.
You may be wondering what all of this has to with RG. Well, so am I!!  I guess that’s sort of the point I am hoping to make.   If there is something salient to say at the end here it is this: my RG related, critical class and privilege consciousness, progressive philanthropy and economic justice work is very important to me.  And to be sure, my consciousness is something I bring with me to all the work that I do.  However, I find that as I continue my work as farmer, deepen my understanding of the world as an ecologist, and connect to new types of communities living rurally, I struggle to connect to the particular perspective and strategy of RG.  And I call it a struggle because I want to feel connected.  I still yearn for that community and support, but am increasingly mystified as to how to connect it to my life in the country and my work as a farmer and steward of soil and water.  I know there is something there—especially as I become increasingly involved in the political work of ecological and regenerative farm practices, and deepen my involvement in a small rural community.  It is on the tip of my tongue, the back of my brain, the space where these things connect—where RG and preservation of topsoil overlap.  Yet it continues to elude me.
Does anyone out there have any ideas?  I sure would love to hear them.