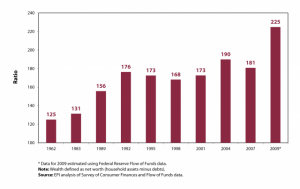 Happy new year, RG! So sorry to leave you mostly post-less last month. My new year’s resolution is to consistently hunt down the juiciest content for you, week after week.
Looking back at 2010, I’ve been thinking a lot about the recent tax cut battle and our role in it as people with wealth. I was inspired by groups like Wealth for the Common Good, organizing the wealthy to speak out against the cuts they would benefit from. I’ve been wondering, too, about the underlying cultural currents that made it possible for policy like this to pass.
First, a few facts:

So why do tax cuts for the wealthy pass again and again when they so clearly benefit only a few? Is it just class war, pure and simple? As Chuck Collins writes, “For the last generation, this richest one percent, with some admirable exceptions, has been using its considerable wealth and clout to push for public policy changes that have further concentrated wealth.” It’d certainly be difficult to argue otherwise—just take a look at the lobbying that led to the estate tax cut if you have any doubts. Warren Buffet says, “There’s class warfare, all right. But it’s my class—the rich class—that’s making war, and we’re winning. I’m a conscientious objector.” I like this quote, and the idea of all of us at RG being conscientious objectors. I also think there’s something else going on.
There’s a Time magazine poll from 2000 that I wrote about in Classified, and it’s often on my mind. About 40 percent of the people surveyed said that they expected to be or already were part of the wealthiest one percent of Americans. What does this mean? For starters, it means that a significant portion of the population believes these tax cuts will one day, if not now, directly benefit them. I wonder, too, if the question had included expectations for the wealth of future generations, how much higher that percentage might have climbed.
While there has always been some level of populist support in the US for raising taxes on the wealthy, the belief that one day, with enough hard work, any of us could be rich, may run even deeper. The American dream—that the worthy will pull themselves up by their own bootstraps, that the wealthy are just those who have already done so—is our most powerful national myth. It’s also surprisingly flexible. Both conservative and progressive movements (the DREAM act is one recent example) frequently tap its logic. While it’s a standard rallying cry on the left to say that the American dream has been betrayed, needs to be more inclusive, or ought to be reclaimed, the legitimacy of the dream itself is rarely questioned.
It’s clear that using the language of the American dream is often an effective strategy for progressive causes, from union organizing to Obama’s presidential campaign. Still, I worry that without asking deeper questions about privilege and how it is perpetuated, this language can slip our grasp and undo our work. Until there is greater recognition of this country’s deeply entrenched, generation-spanning class inequality, politicians will continue to get away with legislating for the wealthy. It makes sense: why fight if you believe that one day you or your children will be wealthy too? Why fight if class is merit-based, if all it takes to build assets is hard work, education and some grit? The myth of the American dream covers up how privilege actually works. Because if there’s one thing I’m sure of, it’s that my experiences as an inheritor bear witness to the formidable institutions and policies keeping wealth in the hands of the few. And I’m pretty sure that’s why I was taught to never talk about it.
Myths don’t need facts to flourish. It doesn’t matter that the research on class inequality is out there, that it only takes a few minutes of reading at United for a Fair Economy’s website to get the picture. The American dream is built on stories. So maybe it’s time we use our own to help undo it. I know this is a tricky moment to make this kind of argument. It doesn’t take much more than uttering the phrase “redistribution of wealth” to be branded an anti-American communist right now. But how much longer can we wait to tell the truth about how class privilege has worked for us—and at the expense of everyone else?
I know it’s easier said than done. Going public can be scary, though honestly it’s not as bad as what you’re probably imagining. It’s not easy to get the message across, either; this isn’t a story the media wants to tell. We may need to come up with some more creative ways to put it out there. I’m hoping that this new year will bring us new strategies.
By the way, if you’re excited to think more about all this, you’re in luck. Wealth for the Common Good and RG are teaming up to launch a new campaign on progressive tax reform this spring. Drop Alison at [email protected] or Elspeth at [email protected] an email, and let them know you’re in.