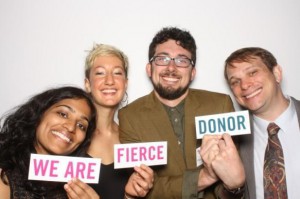 By Katherine Wolf
I joined Springboard Giving Circle (in part) because of a New Year’s resolution. Risk-taking in all the ways ­– political, social, interpersonal, creative – was going to determine my attitude towards new endeavors and potential opportunities in 2014. Since MMMC, the desire to become more involved with RG had also snowballed into what felt like an existential necessity, and so when I was approached to join the group I said yes. Yes to Springboard, yes to community, yes to finally taking concrete action to move resources out of my pretty piggy bank into the hands of powerful NYC grassroots organizing. And of course, yes to risk.

In financial terms the word risk implies the potential for great monetary loss; that kind of risk I was tremendously excited about. It was about time this money in my name that I cannot call mine travelled to the hands of those most affected by injustice! Working in partnership with the other giving circle members and under the guidance of North Star Fund provided a supportive learning space and concrete process for moving money. We accompanied the Community Funding Committee – North Star Fund’s cross-class and activist-led decision-making body – on site visits to potential grantee organizations and participated in their grant-making decision meeting, all checks and balances to the unjust and racist system that determined I would be born a wealthy person with the privilege of having money to donate in the first place.
Yet even in this supportive context, fear crept up at nearly every corner. Why? Because being accountable, as a wealthy, white, ivory-tower-educated cis woman feels scary! Though my trust in North Star Fund’s process and 35+ years of experience doing social justice philanthropy only grew stronger over the course of the process, somehow I felt like I would be the one to mess it up, to not raise enough money, to advocate for the wrong organization or ask the ignorant and obvious question. Because of my education and class background, I was taught to masquerade vulnerability and fallibility with an air of confidence. So to engage intensively over the course of several months about grassroots community organizing – a field that I had little to no experience in – posed a risk to that engrained expectation I have of myself.
And asking people for money? So risky! During our fundraising training we brainstormed a list of fears we had about that piece of the giving circle process. Though we all agreed that it wasn’t likely anyone would die from the experience (phew!), aggravating already tense family relationships was a real possibility. The same goes for friendships in which class, privilege, and philanthropy are rarely spoken about in non-intellectualized contexts. Rejection is real, and it happens, and it sucks.
But of course, the reason why people make risky decisions in the first place is because there is so much to gain. Whereas before Springboard I felt like my knowledge of NYC grassroots organizing was non-existent, after months of working closely with the Community Funding Committee and North Star Fund staff I now feel like I have a foundational understanding of what questions to ask and how to begin the hard conversations. My eyes are open and ears perked to vital issues that were completely off my radar. Did you know that the poorest congressional district in the nation is located in the Bronx? And did you know that building power in the Bronx has been historically challenged by the city’s disinvestment of resources and preexisting tensions within the community? And did you know that a badass group called Women Organizing Neighborhoods is working to change that? Me neither! As a young person with wealth I have the extreme luxury of having the choice to ignore injustice as it exists in NYC; hearing the grantees talk about their work and personal stories amplified by drive to educate myself and to fundraise others to bolster these efforts.
Of course the family conversations were hard, and yeah I might have cried a little bit (overactive tear ducts). But I also had phenomenal support from a staff member at North Star Fund who walked me step-by-step through the entire weekend with my folks. Strategizing with her and with the rest of the Springboard team became a fun game involving color-coded relationship webs and flow charts. I’ve never felt more prepared for or enthusiastic about a pitch. My parents ended up making a major gift for which I am so grateful, but the part that meant the most to me was the dialogue. My mom and I talked about the core roots of injustice, how state violence is detrimental not only to poor/immigrant/brown and black communities, but to society as a whole, and the importance of grassroots movements. I can guarantee you that before Springboard, we were not having these kinds of conversations at the family dinner table.
Through every pitch, every training, every site-visit, my commitment to my own social justice values – and my ability to articulate them convincingly, fearlessly –became solidified and emboldened. While learning about organizing in the city, I became an organizer. That’s a really powerful thing to gain.
To find out more about Springboard Giving Circle and other opportunities to give in NYC, contact Ollie Cannell at [email protected]