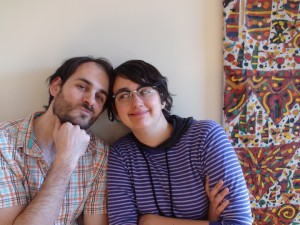 As the co-chairs of the Resource Generation board, we are pleased to announce a few internal shifts within the RG staff.  We thought it would be good to present this as a blog post directed to the larger RG, donor organizing, and social justice community, in part because it relates to bigger questions that many movement-oriented organizations grapple with around leadership structures.
So on to the news: In April, Elspeth Gilmore transitioned from RG Co-Director to the position of Executive Director at Resource Generation, and Co-Director Michael Gast transitioned into the Associate Director position. Long-time staff member Jessie Spector, already serving as Program Director, will now be part of a three-person leadership team.
Much of this transition is motivated by a desire to have our leaders’ job titles reflect their daily work. Elspeth is based in the national office in New York along with most of the staff, and therefore assumes many of the daily directorial tasks.  She will also increasingly take the lead in moving forward the mission of RG, supporting the board, and developing our vision for how we grow and develop in the future. Mike has been the longtime staff anchor for RG’s member fundraising, and he has recently taken the lead in developing RG’s organizational systems and communications strategy. We felt that job title transitions would more accurately reflect their current areas of work.
As the idea for this transition developed, we were also all excited by the opportunity to raise the visibility of Elspeth’s leadership as a woman in the still-male dominated field of executive directors. As Program Director, Jessie Spector is already in a central role, leading the program staff team to carry out RG’s vision. Acknowledging the 3-person leadership team would also more accurately reflect existing roles.
As an organization we are excited to recognize and back Elspeth’s leadership while also acknowledging the importance of RG making shifts in structure as we mature organizationally. It won’t mean drastic changes in the work Mike and Elspeth engage with externally, nor is it a rejection of a co-leadership model. To the contrary, RG continues to nurture an organizational development model that builds off of the leadership of many individuals—a cross-class and diverse mix of staff, board and other volunteer leaders.  We are instead shifting to a single Executive Director model because our board decided that at this particular moment it fit best for our goals and programs.
We are so excited to be part of an organization with such a dynamic and thoughtful staff, and we know that these internal shifts are part of RG’s development towards becoming even stronger.
In solidarity,
Burke Stanbury and Katrina Schaffer
Resource Generation Board Co-Chairs