The 1 Percent Stands for Tax Justice

The 1 Percent Stands for Tax Justice

Have you seen RG’s new tumblr account, We are the 1 percent, We stand with the 99 percent?  Or maybe this picture of RG’s co-director, Elspeth, that’s been making the rounds on the internet?

Lets rewind for a minute. Resource Generation’s Tax Organizing Team came together six months ago to figure out how we could use our voices and our actions to support economic justice by changing tax policy.  We were brought together through a partnership between Resource Generation and Wealth for the Common Good.  We committed to organizing together for at least a year, to push forward conversations and actions about taxes, particularly among young people with wealth.
We, the Tax Organizing Team, are six women in our twenties and thirties.  We live in Denver, New York, Washington, D.C., Philadelphia, and a small town in Maryland.  We work in community organizing, farming, publishing and education.  We have come together through monthly conference calls and one jam-packed weekend of getting to know each other, working hard and having fun.

Fast forward to a few weeks ago. Occupy Wall Street took off under the banner of “We are the 99 percent!” Zucotti Park has been occupied for a month now, and the movement has spread globally, with the We are the 99 Percent tumblr account collecting people’s stories. Last week we launched a parallel tumblr site, “We are the 1 percent, We stand with the 99 percent,” to share our stories and show our support of the 99 percent. This is an important chance for wealthy folks to join in, lend our voice and stand in solidarity in this galvanizing moment.
Will you make a sign, take a picture, and post it on the tumblr? Will you help us spread the word to folks in the 1% that you know?
As we seize the moment, we have also been having conversations about why we’re doing this and what we believe. Here is a statement we drafted to guide our work together:

We Are:
Young people with wealth or access to wealth.
Inheritors or high-income earners or people who expect to inherit money in our lifetimes.
We Believe:
The United States’ current economic system is unjust.

A more equitable society is necessary.

Tax policy is one important piece of creating a more equitable society.

We have a unique role to play in the movement for economic justice.

That Is Why:
We speak out and organize to shape tax policy and shift the public narrative around wealth distribution and accumulation.
We demand change in the current tax structure so that wealth is taxed the same as work, and wealthy people pay more.
We fight for tax justice AND for ensuring that generated revenue is used to help all people meet their basic needs and exercise community control.
We seek to build cross-class alliances and add our voices to groups that are leading the struggle for economic justice. 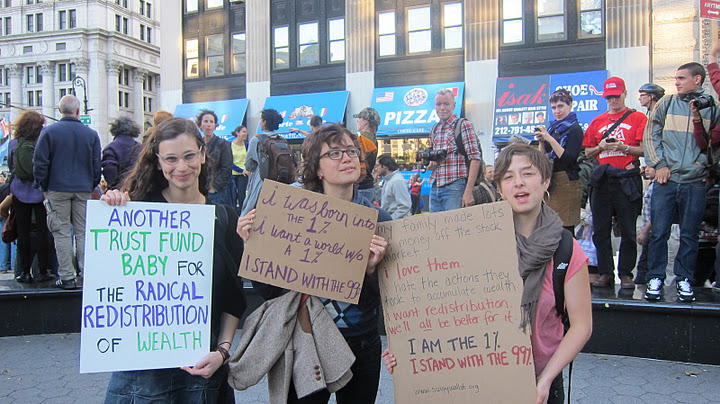 We are excited to be doing this work, especially in this moment.  We hope to engage with you in the coming months!
– The Resource Generation Tax Organizing Team
contact us at [email protected]