Resource Generation stands in solidarity with the ongoing active resistance movements at the border, in Puerto Rico, and Hawai’i’s Mauna Kea.

These struggles are power struggles that are inextricable from systemic wealth inequality, white supremacy, and colonization. In each of these resistances, people with wealth and power are trying to impose their agendas through force backed by the State. And in each one of these scenarios, wealthy people are connected to not only the people making these decisions, but also through their wealth and finances — people are getting richer off privatized concentration camps and prison contracts with the U.S. government; in Puerto Rico, the resistance is demanding the repeal of US-imposed undemocratic austerity policies; and at Mauna Kea, the future of the proposed telescope that would desecrate indigenous land hinges on a foundation’s support.

Within the past two weeks, this state violence has been advanced and escalated while 45 has continued to promote and expand his violent anti-Muslim and anti-immigrant language.

Family separation, capture, and incarceration have been active U.S. government strategies since the beginning of colonization here to consolidate wealth for white upper class people. ,This year there has been powerful and growing growing resistance to the concentration camps currently holding migrant people and increased resistance against the prison industrial complex more broadly.

During the exchanges over the last weeks in both the nations of Hawai’i and Puerto Rico, the colonial governments have arrested peaceful protestors who now actively need bail support. In addition to acute bail needs in support of current uprisings, there are long-haul oriented resource needs for ongoing movement work. We are sharing links in this email for both bail funding and for ongoing work but want to encourage you to get as scrappy and earnest as you can to be in solidarity with these national liberation struggles.

As a community of young people with wealth we have an important role to play in building solidarity with these struggles over time. There is much more depth and breadth to engage and flank in these struggles, but we would be remiss not to keep energy and attention focused on solidarity with the people of Puerto Rico and Hawa’ii in this moment, both in the nations and throughout the diasporas. 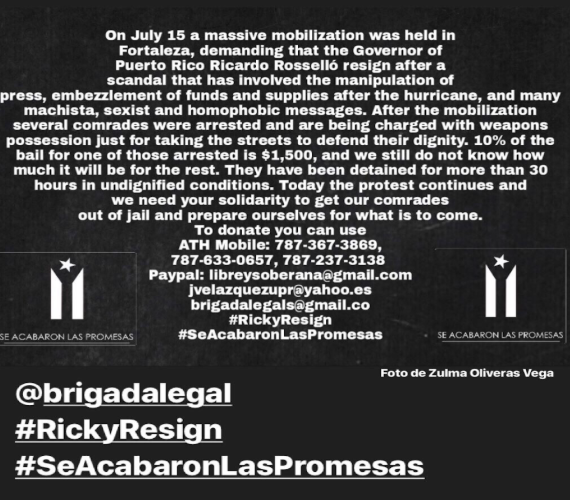