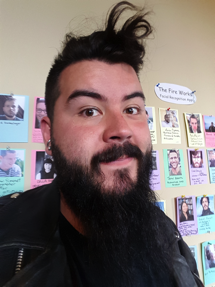 When you open the door the sound pulls you in like an undertow, humming electric and mechanical. Light seeps in through dented and dirty windows high in the metal ceiling. It smells like sweat and burnt plastic; to anyone else, a strange combination, but to me, this was a part of home.

Walking through the workfloor, myself no higher than my dad’s hip, the men would emerge from their stations with big smiles and bigger hugs. All these men felt like uncles, habibis, beloveds. I loved these days, the days I would visit the plastic factory my family owned and operated. 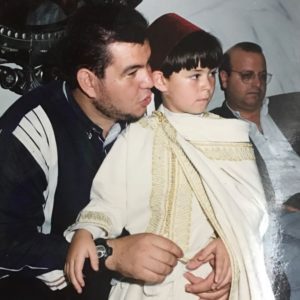 But as I became older, it felt like the men weren’t happy to see me because I was their cute nephew, but rather, I began to feel the immense weight of being the heir of their patron, their employer, their boss. I began to feel more embarrassment when I would visit, when my dad would begin to yell at a worker, blood in his face, spit in the air, my helplessness. Wanting with all my heart to say to my dad’s employees “I’m not like him, I’m on your side” and knowing that I wasn’t– I was running away from that world as fast as I could, I was betraying them and my father.
My dad spends most of his time in the front of the factory, in the brighter and much cleaner offices. The place for white collar work. Between these workplaces a wall, thick enough to mute some of the sound, but not thick enough to protect from the risks of industry.

My brother Othman was born in 2003. More than my other brothers, he looks like me, and was a pretty witty kid talking up a storm at just one and half years old. He loves fireworks, and he loves me. In 2005 he was diagnosed with leukemia, a rare type for children of that age, a type linked to benzene gas exposure. Melting plastic is part of the manufacturing process, and it’s also a process that releases benzene gas. My father’s lungs, skin, clothing, have absorbed that gas — and carried it home — nearly every day for 28 years.

Othman fought off the leukemia, and fought off a subsequent brain tumor. But the damage the cancer caused seems irreversible at this point. He can’t talk much anymore, or move with any control. But he’s comfortable, has full-time care, goes to physical therapy 5 days a week, has a fleet of vehicles that can accommodate his ever growing wheelchairs, he goes out and about and spends time with family, and also a lot of time in front of a TV.

My father believes that everything in life is God’s intention. He still goes to the factory almost every day.
There is a hadith (a story from the life of the Prophet Muhammed PBUH) that goes: One day Prophet Muhammad (peace be upon him) noticed a Bedouin leaving his camel without tying it and he asked the Bedouin, “Why don’t you tie down your camel?” The Bedouin answered, “I put my trust in Allah.” The Prophet then said, “Tie your camel first, then put your trust in Allah” (At-Tirmidhi).

This paradox calls us to understand that some things are beyond our control, but that it still necessary for us to move through the world with intention, to take our precautions first, to do the work, and after all of that do we leave it in the hands of God.
_______
This is why I march. I march for a future when my dad’s employees, my habibis, in the factory can own it, for themselves, for them to be able to self-determine the course of their lives and the conditions under which they labor.

As a young person with access to wealth, I was shielded from the dangers of industry, happily living my liberal arts life in the United States on a beautiful campus. But it was the labor of those habibis, the air that may have poisoned my father and, in turn, my brother, that paid for much of that life.

I march with Resource Generation because I share a vision for a world where communities are powerful, healthy, and living in alignment with the planet. Because I know I have a responsibility to lead change in my family and for my community, a responsibility to humanity and to the Earth.

Join me as we gather in DC on Trump’s 100th day of office. To say together: We Resist, We Build, We Rise.

—
Yahya Alazrak is a National Organizer and Coordinator of POC Programs at Resource Generation.