Part of the web: Tracy and Cara on the RG Mentor Program

Part of the web: Tracy and Cara on the RG Mentor Program 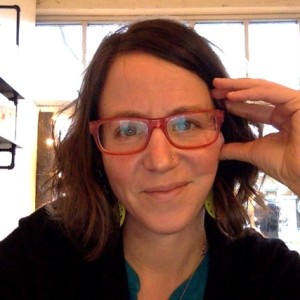 Cara from a Skype window

by Cara Romanik, member
Tracy is always in the same place when we talk:  her study in West Cornwall, Connecticut, at her desktop computer. There is a wall behind her, a bulletin board covered with and pictures to her left. To the right is a bookshelf, and to the right of that, a window that must be north or east facing because of the quality of light it casts. Tracy has long, straight hair and wiry glasses, and when we connect, she usually laughs immediately at what I assume to be the pleasure and surprise of seeing me, all the way across the country, on a video screen, in real time.

Tracy Hewat, one of RG’s founding members, and I were paired up in RG’s alumni mentorship program last year. We met about once a month for an hour and a half, to discuss anything and everything having to do with money, class privilege, giving, change work, our lives. When I applied, I was 33, I had been involved in Resource Generation for seven years, and I was facing big questions: what leadership did I want to go after in the organization? What paid work did I want? How much could I make? How much was it okay to make? How could I think about deepening my commitment to organizing around wealth and privilege while my inherited wealth was dwindling? And what the hell did it mean to become an RG “alumni?” So I applied to the program, hoping to get some answers, or at least have big talks about all these questions. Of I was excited and intimidated about being set up with Tracy: her name and legacy are part of the lexicon of Resource Generation’s culture. We have a major donor category named after her. Some word associations I had with Tracy: founder, sustaining donor, visionary. Before our first meeting, I felt like I was preparing for a job interview, thinking up “good” questions so she’d know I was interested and had done my homework. Ah, nerves.

It is funny to try and quantify an experience of creating a relationship online. Because of the placement of computer cameras, Tracy and I have never actually made eye contact. And yet, I’ve gotten an incredible amount from being in relationship to her in this way. But how to explain it? In my efforts to try and define what has made this experience so meaningful, I asked Tracy if I could interview her about it. The following is a semi-abridged version of the conversation we had last week, almost one year after our first phone call meeting in late February.

Cara: So, when you first heard about this program, what was interesting to you?

Cara: I think there’s something radical about it too. I think for myself as somebody with class privilege, I did think I was supposed to be perfect at everything. So to say: no, it’s actually about support, community, and relationship building… is sort of fundamental in changing the way that we view ourselves in relationships and in the world.

Tracy: The other way that it speaks to the founding of Resource Generation is that I was told, as were so many of the people who I initially met through the organization, that I was not supposed to talk about my money. I was told that it was both dangerous and inappropriate. RG is founded on the principle that we need to talk, we need to question, we need to have the platform to come together and share what’s great and what’s awful, the strategies we’ve put in place, the ways that we’ve pushed ourselves.  To put aside time [in these mentor calls] to have conversations in which talking about money is presumed and positive feels healthy and generative and also (sadly) radical in own way.

Cara: I’m really curious about this tension that you sense around what mentorship is, versus what is this relationship that we’re talking about.

Tracy: For me, mentorship is something that two people choose each other. And there’s something about being set up with somebody, where it feels different
Cara: Like online dating.

Tracy: That’s what it’s like. (we both laugh.) I think mentorship also implies a hierarchy that I don’t feel. I suspect I get as much out of it as you do, so it’s always felt a little disingenuous to say, “I’m the mentor.” As one of the founding members of Resource Generation, I’ve seen a lot of people ask these questions. So I can say to you, “Hey, just to let you know, this is something that I think the majority of wealthy people with our political perspective do.” And I’m 50, so I’ve had longer to ask some of these questions myself. You’re younger, and you’re in the middle of it in some way. I’m not involved in these conversations, I’m not currently in a donor community, so I feel like I’m a little rusty. There are things that you say, that I’m like, oh yeah, right, all of that. Wonder what’s going on with me with all of that. You have a different energy for it and you have your own questions that come from your own perspective, and I think it’s great for me to wrap my mind around it.

Cara: Right, the power dynamic of mentor-mentee seems so specific, and it actually isn’t always like that. So, transitioning, what have your past experiences been with mentorship and how has that impacted your life?

Tracy: There are two women who I considered to be mentors in many ways, now sadly both dead. I hear them [in my head] often. Neither was a formal mentor-mentee relationship; I just attached myself to them. They were brilliant and brave and articulate; they let me see them in both their brilliance and in their . They each managed to carry huge personas. They listened deeply, and they were really honest with me. One of them famously told me I was out of my mind when I talked to her about starting Resource Generation. And, I did it anyway, and then she said, “good thing you didn’t listen to me.” It may have gone further toward giving me confidence than most other things people have said to me. So, I don’t think it’s about mentors being infallible. My relationship with each of those women really widened my perspective. It opened my eyes to what life looks like through different lenses.

Cara: So my last question is, what has this particular experience meant to you?

Tracy: As my parents’ health has gotten worse, my life has gotten very isolated. Talking with you has reminded me that I am connected to a larger community. Meeting with you over the internet is such a funny thing… It’s been lovely to make some small piece of relationship, at the rate of an hour and a half every month or two. It’s been lovely that you have really strongly held a place for me to say, oh yeah, “what is going on in my larger world, or in my financial world?” It’s been nice to hear your insights and I appreciate that you were flexible enough that no problem was too small or too large. And that if you had a suggestion, that you voiced that. So, do you have answers to any of these questions yourself that you want to share?

Cara: What’s so interesting for me is that when we started I came from a place of having been deeply engaged as a leader in the organization, and also confused about what my next steps were. I had been doing some local work, and then I was doing national work, and this year has been about not actually knowing what’s next. I think during our first conversation, I said to you, look I don’t know what I want to do in Resource Generation right now. I need a breather. And I remember you were like, “yeah, that’s fine. That’s exactly where you need to be then. Because this happens, and it’s really important to take stock along the way before you jump into steps.”

So it’s really given me permission and opportunity to explore and be in a process. When you give space for that, there’s so much deepening around well, what does it really mean? I think on some sort of core level, it’s reminded me or affirmed that a lot of times, it’s about building relationships around the conversations while doing the work. That’s my big picture answer. And then the detail level is: I’ve gotten so much from hearing about your experiences. And I think something you’re talking about around having strengths but also being human in this process. So I remember this really powerful conversation we had while I was in New Orleans about your funding work there, but I also remember this seemingly mundane but also conversation about whether you were going to get a Tesla or not. The significance for me is in being able to have both.

Tracy: That’s where it feels like, ok, this does fit some of what defines mentorship. I think we could both say that. So the hierarchical piece still seems wrong, but some of the qualities… being able to share strengths and also the personhood. Doing it regularly over a period of time. Speaking honestly and listening. Those things all seem mentorship-like to me.

Cara: You know, both the physical distance that we and also the constructed nature of the relationships seems embedded in our modern times. I didn’t pick you and you didn’t pick me but this is not a time when anyone is picking anyone in that way. Or if it is, it’s like, wow, this is an old-fashioned experience.

Tracy: We did have some good yentas.

Cara: It’s true.
(We both laugh.)
In fact, Tracy helped me find answers to all of the questions I came in with. But what’s much more significant is my realization that I will remain connected to Resource Generation community, to this work and this journey, way past my 35th birthday next July. Tracy and I, we’re part of the web. And it just keeps on growing.