by Nicole Lewis
By now you’ve probably read a blog or two or three reacting to Beyoncé’s latest video, Formation. We haven’t seen this much Beyoncé-mania since she dropped her last without notice.

No matter if you love it or hate it – if you think Beyoncé is a feminist or anti-feminist – Formation has gotten us talking openly about race, resistance, political activism, and the Black Matter movement. No doubt, we need celebrities supporting the Black Lives Matter movement creatively. We need to see our real lives reflected in the art around us. Art gives us another, and sometimes lighter, way into difficult, complex, or heavy topics. Unfortunately, systems don’t change because of one well-styled video or the subsequent chatter it generates. What we need now is sustained commitment to the work.

More Black “Bill Gates” Won’t End Racism
Here at we’ve been thinking about the intersection of racism and class privilege for a long time. (In fact, I even wrote a book about it called Between a Silver Spoon and the Struggle).  We’ve found music is a major source of messaging about how people of can overcome their circumstances and “make it.” is no exception. On the one hand, Beyoncé is reminding us that she is black and proud. And, on the other, she lays out her path to success in the chorus:

Is that really all it takes? So if we just lace up our boots and get to work towards our vision we can be like Beyoncé too? We hear this recipe for a rise to the top all the time. Yes, Beyoncé is black. Yes, she is extremely successful, and yes we’re excited that she has used her success to move money to Black Lives Matter.  But her singular success shouldn’t be taken as evidence of the ease of upward mobility for all black folks. That’s a dangerous narrative employed by people like Rush Limbaugh to assert that we live in a post-racial society.

The grind isn’t going to get the police to “stop killing us,” as Beyoncé puts out in her video. Neither will a rise in individual black billionaire “Bill Gates” end systemic racism and poverty.  No doubt, we need a prosperous black community. We’re up against the cumulative effects of generations of exploited . Addressing this history will take a sustained commitment to for systemic change for all black people. Black liberation can’t equal just a few individuals accumulating extreme wealth.

Black Wealthy Folks Know Something About Racism
Even if we have made it to the top, black people with wealth know something about racism. We know that the forces keeping the doors to corner offices and executive suites closed to us are the same ones allowing black women and men to be killed at the hands of police officers with no pause or justice. No, the consequences are not at all the same. And yet, the racism we experience is a constant reminder that, though wealthy, our fates are tied with the families who have had to bury their children in this way.  Our blackness means that we have to repeatedly brace ourselves against the crushing weight of another officer going unindicted, that we are asked to bury our dreams, that we must steel ourselves against the daily assault of racialized microaggressions in the workplace. What if Black people everywhere lived a life free from this specific kind of grief?

To do this, we have to get and join the work to end white supremacy. As young people of with wealth at RG, w are taking collective action towards a more racially and economically just world, and countering the myths of liberation through individual wealth accumulation and of a post-racial country evidenced by small numbers of people of accumulating wealth and power.

How Do We Get in Formation?
At RG, we are working towards a world in which there is an equitable distribution of wealth, land, and power and in which everyone enjoys prosperity. As long as wealthy people still exist, we have roles to play in getting to that world.

Black wealthy people can play key roles in the organizing to end racism, and have done so in the past.  Over the past year, as Black Lives Matter coalesced into a full-blown movement, black celebrities used their resources and visibility to support the cause. Well before she dropped Formation, it was reported that Beyoncé and Jay Z bailed out protesters in Baltimore and Ferguson. LeBron James and Kobe Bryant warmed up in “I can’t breathe” t-shirts to show solidarity for Eric Garner. And John Legend fed weary protesters in New York after they marched in protest of the non-indictment for the officer who put Eric Garner in a lethal chokehold.

We can take our cues from these celebrities and move our financial resources to support organizers, use our sphere of influence to show solidarity and build visibility, and can even help to provide a bit of relief and comfort when the road gets steep.

All of this requires that we be open and honest about being black and wealthy; that we no longer see our stories and personal financial successes as why we can’t march on the front lines.
Along the way, we have to celebrate black lives and black bodies. And, in no uncertain terms, we will continue to grind and slay while twerking to Beyoncé. 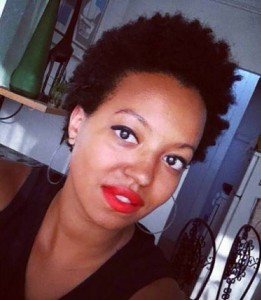 Nicole Lewis, 28, hails from Washington, DC. In 2005 she said goodbye to the Nation’s Capital to attend The University of Michigan, where she studied English Literature. Upon graduating, she moved to New York City to work as an organizer for Resource Generation. Here, Nicole organized young people with wealth for racial and economic justice. After three years of she synthesized her experiences into a book, entitled, Between A Silver Spoon and The Struggle: Reflections on The Intersection of Racism and Class Privilege. Working on a book project, in which she conducted interviews with RG’s members and leaders, sparked her interest in journalism. Currently, she is a Hearst Scholar studying interactive journalism at CUNY’s Graduate School of Journalism. For the past six years, Nicole has called Brooklyn home.