This post is a part II of a three part blog series and RG campaign, “It Starts Today: Moving $1 Million to Black-Led, Black Liberation Organizing.” Click here for more info on the campaign.

(Soundtrack for this post: “There’s Something Wrong With This Picture” by Galactic)

In the Resource Generation community we are going to move $1 million to Black-led organizing for Black liberation by May 20th, 2015. For many of us, this is an act of reparations. 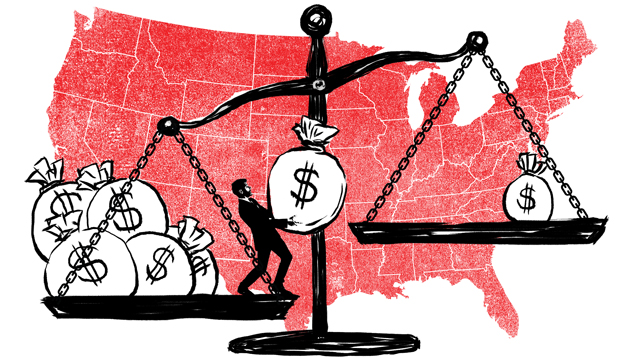 The National Coalition of Blacks for Reparations in America (N’COBRA) explains that reparations require governments and corporations to apologize and provide material amends for the history of slavery and white supremacy. Beyond this, N’COBRA points out that “all white people have to some extent benefited from slavery and… White Supremacy” and individuals who understand how they have benefited “if acting in good faith, would [also] contribute to reparations funds for use in assisting in the reparations process¹.”

As white wealthy individuals, reparations means redistributing our excess personal money to under-resourced Black communities, as a way to acknowledge and attempt to repair the wealth, land, and knowledge that has been stolen from Black people overall, but that has benefitted us personally². The wealth accumulated in this country, through theft of Black labor, property and dignity, has primarily benefited white communities:

This stolen wealth is not abstractly dispersed in history’s ledger books. It is actively sustaining and providing a safety net for white communities today. Please see the graph, below.

The safety net provided by having wealth (savings; a home; stocks; family money; or some other asset) – is the distinguishing factor between how families or individuals that have access to this wealth, and those who don’t, are able to weather a financial crisis; a major illness; or any other unexpected disaster.

Why RG, Why Now

Think about how this wealth gap plays out in your own life. White households have a median net financial worth of $110,729 – “worth” that has accumulated across generations, through home ownership; access to loans and public programs; land theft; slavery; and more.

Black and Brown households are estimated at owning less than $7,500 in assets. In this context, redistribution and reparations are core frameworks that must shape our work as we young people with class privilege contribute to the movement to dismantle white supremacy.

It is time for us show up in the ways we can and take ownership of this reality, in ways that make sense for our identities. We ask our readers who are people of color to consider what role – if any – are you called to in this work of reparations to Black communities? And to our white readers we make a specific appeal: it is our particular responsibility to show up and make reparations. Right now.

² The idea of real reparations to Black folks has come to be seen as unlikely in the mainstream white U.S. Dr. William A. Darity explains why in this video. But it was common practice in the days of chattel slavery, and contemporary scholars, legislators and organizers alike are working to ensure that this becomes a politically viable reality soon. (Coates)
³“Old-age insurance and Social Security initially excluded most African Americans,” by excluding the jobs they occupied. Bobo: The G.I. Bill, which spurred the creation of suburban housing wealth by backing zero-down payment loans for veterans, left most Black people without financing, by turning them over to racist banks and Veterans Affairs officials. A similar pattern financed white veterans college education, while “only one fifth of the 100,000 blacks who had applied for educational benefits had been registered in college by 1946” thanks to an apartheid education system. Wikipedia: http://en.wikipedia.org/wiki/African_Americans_and_the_G.I._Bill
4Department of Justice: http://www.justice.gov/opa/pr/justice-department-reaches-settlement-wells-fargo-resulting-more-175-million-relief. This mirrors a pattern throughout the 20th Century, where lenders and government agencies alike forced housing values to drop when Black folks moved in. This is like spending $100,000 on a stock, then being told it’s suddenly worth $10,000 because you’re Black. Or worse – paying most of your mortgage and then being evicted with no equity for one missed payment.
5Boston and Newport were chief slave ports. Most of New England had its peak slave-ownership just as the Revolution kicked off. http://slavenorth.com/profits.htm