I was born in Colorado into a white, working-class family, and for most of my life, was raised by my Dad and helped to raise my two younger siblings. My family had housing stability, consistent food, and safety, but we went through a few stretches of turning to free lunches and food stamps. I hated leaving the assigned seats of desks in classrooms to navigate social hierarchy of the lunchroom. And I resented my Dad for not caring enough about me to avoid sending me to the free lunch line and the bottom of the social heap. Now it’s literally amazing to me that a tiny human with just a few years on Earth could so effortlessly deploy the logic of internalized classism against her family. 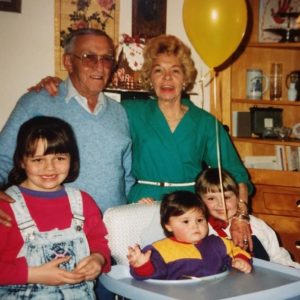 Hanging with my grandparents and siblings, sporting overalls, nervously deploying the logic of internalized classism against my family

I’m only beginning to realize how deeply that internalized classism — my own and my Dad’s — runs throughout our relationship. I’m realizing now that it’s absolutely part of the reason I left Colorado to escape to New York.

I’ve been in New York City for the last four years, where I’ve been working with progressive nonprofits and foundations on strategic communications campaigns both in-house and as a consultant. All of which wouldn’t be possible without a college degree. Despite anxiety and resistance from my Dad, I entered into the abyss of student loans, which I took out in my name, to attend Colorado State University.

After five years, and heaps of debt that to this day I haven’t really made a dent in, I became the first person in generations of my family to graduate with a B.A. degree. My degree, combined with my white privilege, provides serious access, since so many jobs, especially those in the nonprofit industry or “social change” sector, won’t even consider qualified applicants without a college degree.

Realizing the role that college institutions play in perpetuating classism, racism, and racialized wealth disparities — combined with what will probably be my lifelong relationship with student debt — clarified my ongoing politicization around capitalism, class, and, race. It also made me realize where I wanted to be in the fight for social justice.

In my last year in college, I stumbled into an environmental organizing job — canvassing for an environmental nonprofit. It was the first ‘nonprofit’ job I’d ever had; I held down full-time service jobs since I was 14, which I had continued to do throughout college in addition to a full-time course load.

Spying that Craigslist ad for Clean Water Action got me involved in the local environmental and food justice movements, community organizing, and ultimately my first full-on communications job: Communications Coordinator for Restaurant Opportunities Centers United (ROC United). There, I got to work on one of the campaigns I’m most proud of to this day — we released the first-ever report clearly demonstrating the link between the restaurant industry being the highest source of sexual harassment charges of any industry (and all-around toxic swamp for women, trans, gender non-conforming and femme-identified people) and the subminimum wage (the subminimum wage for tipped workers has been frozen at $2.13 since 1991).

The report received massive national media attention (with restaurant workers front-and-center sharing their stories), involved awesome on-the-ground direct actions, and powerfully connected women’s rights organizations to worker’s rights organizations — bridging an ongoing political schism between “identity” and “class” that doesn’t exist in reality. As someone whose first job was in the restaurant industry, working at ROC United, and on that report, was a personal highlight and solidified my commitment to strategic communications and economic justice.

To bestow upon you an understatement: communication is fundamental to how we perceive everything about the universe. Word choice, their emotional associations, or just what doesn’t get said or communicated, is critical to how we understand any issue, ourselves, others, the realms of possibility, and different, new ways of being.

There’s a reason why fascist regimes and even allegedly benevolent corporate democracies aren’t huge fans of investigative journalism. I’ve always been deeply, nerdily into words. More than once, I gifted myself a thesaurus as a child. I fancied myself an aspiring author and even had a makeshift printing press, but it wasn’t until high school when I married myself to the debate team that I absorbed the power of language and rhetorical framing and presentation. It was fascinating to win back-to-back debate rounds arguing the opposite side of the same issue. It was soul crushing to lose a round every once in a while to a dude, hearing from the judge later on that my argument made more sense but the guy was “more convincing.” I wondered, too, how often I won a round over a student of color because of my whiteness, or simply saying something that reinforced the judge’s pre-existing worldview and prejudices. 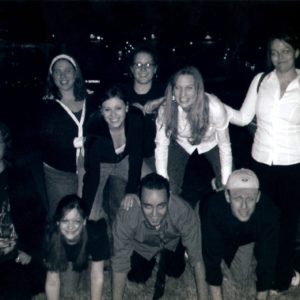 I got a taste of how complex communication is — that there’s way, way, more to it than words and a thesaurus. There are all kinds of unsavory power dynamics, animated by patriarchy, classism, and white supremacy. Strategic communications to advance social justice, within the context of today’s media institutions, means taking on corporations that are hell-bent on perpetuating messages to justify their existence and maintain the status quo. I am drawn to this field in the way that I am drawn to most things, by some sort of adversarial magnetism. I mostly want to learn more about it so I can challenge it.

My political qualms with how most universities operate in the U.S. are a big reason why I haven’t doubled down on figuring out how to afford to go back to school. But, if I did, it’d probably be to study stuff about class, race, and media. So, I feel lucky and excited to have found myself working at Resource Generation where those are the exact issues I’ll be working on with such creative, smart, and committed staff and members.

In such a complex and urgent political moment, which is so clearly a result of the U.S’s collective deficiency in effectively and openly talking about class and race, it’s such a unique opportunity to work for an organization where we talk about class and race every day and where I know I’ll be able to learn more about how my personal identities fit into the larger political context. In just 3 months, I’ve already learned so much. 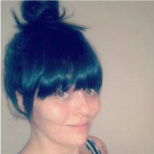 Maria (she/her) is a communications and media strategist with a background in community organizing. She has developed and implemented strategic communications campaigns to advance progressive policy,