When the Muslim ban was implemented, I was with my family during the Lunar New Year holiday practicing ritual, honoring ancestors, and eating dozens of dumplings. I watched in confusion and horror as the news broke in my family’s living room via Chinese satellite TV, struggling to pick up what was happening. 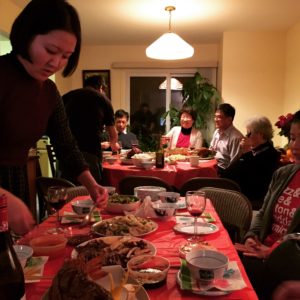 As the hours went by and we heard of reports of people being detained at the border, my mom started railing about it with her sisters and brothers. Like many immigrant families, we still have relatives abroad and make frequent trips to see them. She felt, on a visceral level, the injustice and inhumanity of being denied entry to your home after leaving to maintain family ties. I was proud of her for setting the tone, for being loud and furious and fighting against the instinct to keep our heads down and not talk about it. But inevitably at the end of a rant she would turn the conversation to what she and the family should do to protect our money.

This moment of reaching for security through money sums up all of the conflicting and complicated feelings I have of being part of a wealthy immigrant family.

I share my family’s story with you to show that all immigrant families’, indeed, all families’ stories and histories are class stories. If we aren’t honest and clear about our class backgrounds, class stories can be used to divide and conquer, pushing people to compete against each other for individual security over the collective good.

During this time of violent anti-immigrant repression, I am compelled to look hard at my own family history and the stories we tell to each other, tell to the world, and tell inside our heads to make sense of how we got here. Here are the facts: I am a descendant of Chinese landlords, military clerks, and military officers. My grandfathers fought for the Kuomingtang (KMT) Nationalist army and fled to Taiwan with their families when they lost the war. My parents attended college in Taiwan and immigrated here as graduate students. They both got white-collar professional jobs in North Carolina. My mom has made most of our family’s wealth through her insurance business, and the vast majority of her customer base are other Chinese immigrants and families.

Here’s the model minority spin: my parents are the scrappy immigrants who pulled themselves up by the bootstraps, came here legally and played by the rules, and got their home in the suburbs with the two car garage and sent their three kids to college. This is a story we will use to protect ourselves (by being the “good” immigrants), but perversely, the more we use it the more it hurts ourselves and others by reinforcing myths of the criminality of “bad” undocumented immigrants and of “lazy” Black people. We can only be respectable if other people aren’t.

There’s also the immigrant hustle version: my parents dealt with constant racism, worked multiple jobs to make a living, bought our clothes at yard sales and Kmart, and my mom battled her way into an industry dominated by white men to carve out a place for herself and to advocate for other Chinese immigrants. This is the story I use when I want to minimize the distance between me and my friends who also had immigrant parents but lived in one-bedroom apartments and barely saw their parents because they worked multiple shifts at a restaurant. This is the story I use to hide the role of class privilege in my life, that tries to flatten being an immigrant into a uniform experience of hardship and struggle.

Of course, it was hard for my parents. But through my time at Resource Generation I’ve learned how to tell this story adding a class privilege x-ray to their journey: my grandparents were landowners who fought against the Communists. My parents came from class-privileged families who could afford to send them to college and abroad. They immigrated legally after the Chinese Exclusion Act was repealed and during a time of more open immigration policy to receive advanced degrees. They speak fluent English. Affirmative action made my mom’s professional breakthrough possible. They were able to buy a $300,000 four bedroom home in 1993, when we were one of two East Asian families in a 99% white neighborhood that Black people had been redlined out of (redlining is when a bank disproportionately denies mortgages to people of color, especially Black people). None of this negates my parents’ struggle or the racism they experienced. But their class privilege served as a buffer and a safety net, and on top of that they aren’t Black in a virulently anti-Black society.
So I only have compassion for my mom when she starts to stress about money, even though she has more than enough. Money for her represents safety in a hostile climate. Money and class privilege got our family out of trouble in the past and made it possible to immigrate twice in two generations. But I know the ICE raids and the bans aren’t targeting my family. They are targeting the most vulnerable – poor and working class immigrants of color without legal status. People who work hard but never reach financial security because of all the barriers stacked against them.

The stories we tell about immigrants are class stories. For progressives, immigrants represent the myth of the American Dream, the ever-so-enticing lie that if you just work hard enough you can climb the class ladder. For the Right, immigrants are all poor (read: criminals) who are drains on the economy. Placed in this dichotomy, it’s easy to see why families like mine fight so hard to be the “good” immigrants. But both narratives reinforce classism, the system that has created a world where you have to “earn” a right to be treated with basic dignity as a human being.

This is an urgent time, and as the call goes out to protect and defend immigrants, progressive communities must respond in a way that doesn’t reinforce the underlying classist and racist beliefs that fuel the deportation machine. Here are my recommendations:

The conversations we choose to have today are shaping the future that so many of us are fighting for and deeply believe in. People with class privilege have a role to play in fighting for social justice; honestly discussing the role of class privilege in our families’ histories and futures is one of them.

As my mom and I talk about our shared values and the world we want to build towards, we are also learning how to tell the truth about how our family is implicated in, benefits from, and resists violent systems of exploitation. We talk about supporting those most impacted by injustice, to organize, and to build power that will challenge the status quo at its root, not perpetuate it. That’s why I encourage my mom to give to Muslim and poor and working class immigrant-led grassroots organizations in her home state, North Carolina. We know that creating a world in which everyone is powerful, healthy, and living in alignment with the planet requires us to acknowledge our class privilege in order to protect our communities, not our wealth.