Take More Risks: How can RG show up more fully for Black liberation?

Take More Risks: How can RG show up more fully for Black liberation? 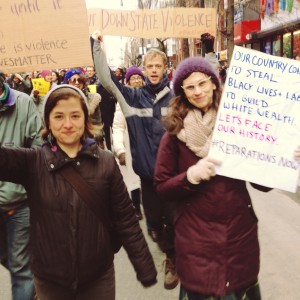 Thank you to Maurice Mitchell for attending our chapter event on Tuesday, December 9th and for sharing all your insight and passion. This blog post has been heavily influenced by your analysis and your call to action.

There’s a lot to mourn these days. From the non-indictments of Darren Wilson and Daniel Pantaleo for the murders of Michael Brown and Eric Garner, to the murder of Tamir Rice, a 12-year-old boy who carried a toy gun, there’s a lot of justified grief and outrage. But the regularity of these incidents is not new — a Black person is murdered by a police officer, security guard, or vigilante every 28 hours, often without recourse or retribution. There hasn’t been a sudden surge in this number. The difference now is that people are paying attention.

But even though there’s much to mourn, folks all over the country are mobilizing. As Maurice Mitchell, an NYC-based organizer who has spent a lot of time on the ground in Ferguson these past months, said at a New York City RG Chapter event this past Tuesday: this moment is happening because young black people in Ferguson took to the streets and demanded that their voices be heard. It’s been 127 days since Mike Brown was murdered, and the protests and rallies haven’t stopped. In fact, they’ve intensified and multiplied and are springing up in cities all over the country, including rural and predominantly white communities. Even celebrities are getting involved, from LeBron James’ “I Can’t Breathe” shirt to Garth Brooks canceling TV appearances out of respect for the situation in Ferguson.

This magnitude of sustained protest indicates a rare transformational moment, and is reminiscent of the conditions that catalyzed the landmark civil rights legislation of the 1960s that transformed the country. The organizers behind Ferguson Action have offered a comprehensive vision of what changes are needed in order to end institutionalized racism, despite the common critique that this Ella Baker-style non-hierarchical movement has no concrete demands. In a frantic attempt to quell civil unrest, government officials at the local, state, and federal levels have offered basic reforms, such as mandating that police officers wear body cameras and committing to de-militarizing the police. Youth and adult organizers were even invited to a meeting with President Obama.

But this movement goes far beyond policy reforms. As Maurice reminded us, “this movement is about Black liberation.” It’s about continuing the struggle that began over 400 years ago when Black people were forcibly uprooted from their homes and enslaved by White colonizers in the U.S.  It’s about asserting and internalizing the simple fact that Black people are human. All of our economic, legal, and social institutions perpetuate the racist beliefs and practices that were so fundamental to the creation of this country, from the genocide of Native Americans to the declaration that Black people were only ⅗ a person. Because we’ve never collectively confronted our legacy of White supremacy, we still experience racism within ourselves and within our institutions. We all have a role to play in challenging the institutional injustice that has engineered this atrocity.

There was one central question that Maurice asked us, the RG NYC community, to consider: How can we each risk more? Black liberation organizers are risking a lot in this moment — their jobs, their safety, their mental and physical health. He pointed out that even walking to the train from our event in gentrified Bed Stuy is a risk for a young Black man. As people with privilege, we need to challenge ourselves to take bigger risks in this moment. Many of us are isolated from the consequences that other organizers face by virtue of our unique access to resources. So we can’t let fear hold us back. And as Maurice reminded us, we don’t want to look back 50 years from now and regret our inaction.

As people with privilege, we can tend toward overly intellectual responses and obsessive self-criticism. And for those of us who are White, there may be a lot of fear that comes up in these moments — the fear of saying something offensive, taking up too much space in the streets, or compromising our relationships with family and friends. While it’s essential to be cognizant of our histories and the impact our identities and actions have on other people, it’s also essential to show up for racial justice and to remember that this isn’t about individual acts of prejudice or trying to be individually perfect, but about overhauling the racist infrasture this country is built upon.

Maurice, knowing his audience well, implored us not to get too caught up in theory or self-importance, but to gravitate toward informed action. So, what can we do?! Here are a few ideas for risks we can take together:

The New York City Resource Generation Chapter is committed to supporting our members in engaging with this movement for Black liberation. The Campaign Committee will continue to mobilize folks for rallies and actions, as well as providing resources for doing jail support, legal observation, and community security. The Giving Committee is brainstorming vehicles for moving money swiftly and accountably in NYC, and will continue to follow the leadership of the Core Four organizers who are developing these relationships and funds on a national level. All of our upcoming Praxis Groups will continue to explicitly address racial justice and offer an opportunity to delve deeper into anti-racist thought and practice. Share with us your ideas for other programming you want to see in the chapter, of if you want to take leadership in engaging our RG community.

Maurice gave us a clear choice to make: “Either Black lives matter, or they don’t. So if you’re on the fence, hop off.” We need to mobilize our community to help transform this moment into a movement. Join us!