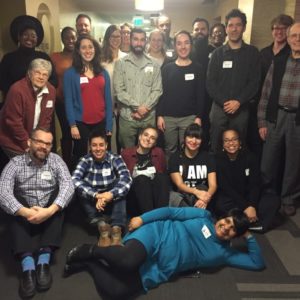 What does it mean to be accountable to a cross-class, cross-generational and multi-racial group raising money for grassroots organizing as a young white man with access to wealth?

This is the question I asked myself when I joined the Bread & Roses Giving Project early this year. The Giving Project is a 6-month long undertaking dedicated to raising funds for racial and economic justice in the Philadelphia area. The Project involved twenty people, including a handful of RG-Philly members that participated as rich folks who are transparent about their access to wealth.

Together we did the work of becoming what Bread & Roses calls donor-organizers: we participated in a weekend-long training on the racial wealth divide, fundraised our networks, made meaningful gifts of our own, and interviewed grantees to determine collectively where the funds we raised should go. Each step of the way was expertly facilitated by the Bread and Roses staff, which allowed participants with varying degrees of experience with social justice organizing to have honest conversations with one another, and with their friends and their families, about the need to fund organizations working for justice and systems change in our communities.

I found that showing up and being accountable as a rich person was scary, but also exhilarating for the same reason: it meant being honest. It meant allowing myself to be vulnerable, to make mistakes. Sharing stories about our families’ class background and the class patterns that accompanied it, about our own access to wealth in a non-RG space, was intimidating. Even simply the phrase “ person with access to wealth,” circulated a lot in an RG context, was jarring to other Project participants. Being out and open about one’s wealth can be unusual in more progressive and radical political spaces. But allowing ourselves to talk about those feelings honestly and without self-reproach or judgment was necessary this space. As RG members, we were breaking taboos but also being careful about taking up too much space. We all knew that each of us was going out and having hard conversations with friends and family, whether we were asking them for $15 or $15,000. Not only that, each of us was challenging head-on the idea that entitled white folks knew what was “best” for communities most affected by the wealth divide, by racialized capitalism.

In the end, the Giving Project raised $210,000—doubling our initial goal of $100,000. The success of the Project was exciting for all involved. I personally feel invested in future iterations of this giving circle. I felt accountable in the sense that I had a lot of difficult and pushed myself to challenge friends and family to give more than they have in the past. At the same time, there was a lingering feeling that I could have done more, put in a greater effort, made a few more asks, had better conversations. This might be a class tendency toward perfectionism, but it’s also the feeling that this project is over, the hard work of working for the redistribution of wealth and power continues.