“As Wealthy People, We Damn Well Better Be Funding Resource Generation Ourselves!”

“As Wealthy People, We Damn Well Better Be Funding Resource Generation Ourselves!” 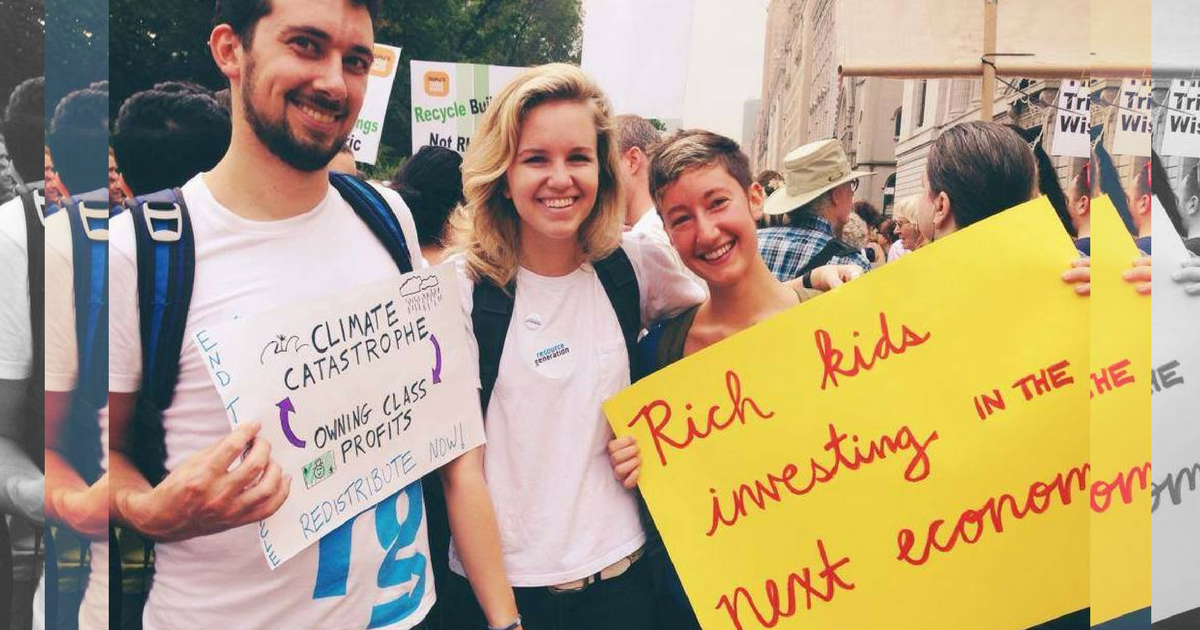 If I’ve learned one thing as a member of Resource Generation, it’s to lean into the uncomfortable feelings that being fundraised brings up for me because they lead me to real action.

And if I’ve learned one thing as a fundraiser, it’s to make your intentions really clear upfront. My intentions: In this post, I will tell you why I give 10% of my annual giving to Resource Generation as a member and ask you to join as a new member or increase your membership dues to meaningfully reflect your access to wealth.

When I first came to Resource Generation, I did not like the idea of being wealthy. I cringed every time I heard someone say the words “trust fund baby.” What would they think if they knew that I was one? The horror! I had been attending some Occupy Wall Street protests, having some of my first experiences taking to the streets. Chanting “We are the 99%” was making me a little uncomfortable, though. Then, a friend gave me a “We are the 99%” t-shirt. Shit, I thought. A of anxiety grew in my stomach. Am I the 1%? I wondered. Maybe the 2%, I hoped, or %! I knew I could not wear that t-shirt, not even for . It was a lie. I promptly buried the t-shirt at the bottom of my drawer and resolved to figure out my life. you may ask? Resource Generation.

In RG, I found to talk through complicated feelings about being an inheritor of wealth, particularly guilt, shame, and secrecy. I saw the connections between my family’s stories about my great grandfather’s paint company and grandfather’s steel company and the racialized policies that supported the wealth acquisition of white people while oppressing others. I gained the language to describe the world I want to live in — one where equity and justice are foundational principles and power and resources are shared — and what it will take to get there. I learned to give money to people most impacted by injustice, with no strings attached. I skills like fundraising friends and family members. I attended RG conferences with my cousins and brought back ideas to our family foundation. I wrote a giving plan, and then I followed it. I have been challenged to give more boldly and held accountable by RG community and staff to make sure I really followed through.

This is why it’s so important that we fund RG through membership dues that reflect our access to wealth.

In fact, it was at about this time last year, during a fundraising conversation with Iris Brilliant, one of RG’s national organizers who also has access to wealth, that I got a much-needed push to give more money away and increase my membership-dues to RG to help fund the work of organizing young people with wealth to move more money to social justice. This conversation did not feel good. I was so uncomfortable that I got off the phone without making a commitment beyond renewing my $250 membership. Like when I received that “We are the 99%” t-shirt, I knew I had to reckon with my feelings of discomfort. Being asked to give away more money surfaced feelings of guilt and shame that are always lingering when I think about how my inherited wealth grows through no effort of my own, insulates me from the fear and worry many people feel about financial security, and silently perpetuates injustice.

As I reflected on this fundraising conversation, our country was bracing for Obama to leave office and Trump to be sworn in as the 45th president. I knew that I could not let my own feelings get in the way of moving money that was urgently needed as many groups were bracing for even more aggressive, harmful policies. I emailed Iris and RG’s Development Director, Colette Henderson, pledging to give RG $2,000 in membership-dues for the year, the equivalent of 10% of my total giving.

In the months that followed, I on the RG community to help me create a plan to give much more boldly in 2017. This year, I am on track to give away $100,000, almost all of which is going to grassroots social justice organizing. To decide where to give, I have worked with a local New York City social justice foundation, North Star Fund, and also made a five-year pledge to Solidaire’s Aligned Giving program to support the Movement for Black Lives, I am pledging 10% of my annual giving to RG as membership-dues because supporting RG helps people like me move more money to social justice.

RG has catalyzed me as an activist and social justice funder and helped me to do the personal work I needed in order to step into that role. My giving in 2017 is a big step forward, but it also represents a very small percentage of the wealth I have access to and will have access to in my lifetime. I am committed to continuing to increase my annual giving and tremendously grateful to RG for pushing me to do that.

As people with access to money, we damn well better be funding RG ourselves without taking funding from organizations with less access!

My suggestion to you is to increase your membership-dues to RG to be 10% of your annual giving. In that case, 90% of your giving will go to grassroots organizing led by people most impacted by injustice (I hope so, anyway), and 10% to help fund an organization that moves young people with wealth to learn, act, organize, grow, and show up boldly for a better world.

Sarah Frank is a member of Resource Generation based in New York City. She’s a leader of the local RG chapter. Resource Generation is a national multiracial membership organization of young people with wealth working toward the equitable distribution of wealth, land, and power.