Another Trust Fund Baby for Taxing the Rich

Another Trust Fund Baby for Taxing the Rich 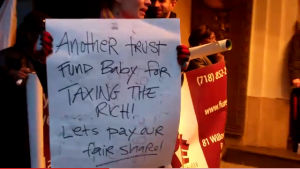 Here’s a story for all you communication geeks, you appreciators of learning moments, you RG members looking to use your privilege to fight for equity as budget cuts rage across the country.
Yesterday we headed out of the Resource Generation office on East 23rd street, poster board signs tucked under our arms, and boarded the 6 train towards the Waldorf Astoria Hotel on Park Avenue.  We were joining the newly formed coalition New Yorkers Against Budget cuts in a rally to “Demand That Millionaires Pay Their Fair Share” in response to governor Cuomo’s plan to end the Millionaire’s Tax while slashing public services.
We joined in at the back of the group of maybe 100 people already gathered in a barricaded area a block from the Waldorf.
Our signs said…

Now let me remind you that this is a rally of folks chanting “Not another nickel, not another dime! Bailing out millionaires is a crime!” and “Hell no we won’t go! Not til you cough up the dough!” from organizations of people who are daily feeling the impact of social service cuts.
Needless to say our signs didn’t go over so well. We tried to check in with some people about the signs and there was a complete disconnect. Bottom line, we were not read as millionaires and our signs didn’t make it clear who we were or how we were trying to connect to the issue. When we tried to explain people thought we were making a bad joke. Learning moment.
So we rolled up our signs and chanted along with everyone else, “Millionaires you can’t hide! We can see your greedy side!”
Then we got an idea and flipped one of our signs over on the sidewalk and wrote:
“Another trust fund baby for taxing the rich!  Let’s pay our fair share!”
Pleased with ourselves we held it up for Park Avenue oncoming traffic (after passing it back and forth a few times, squirming in our shoes a bit, and wondering if we were really about to publicly declare ourselves Trust Fund Babies.) Then we held it up so that pedestrians passing in front of the Waldorf could read it.

A lot of people read it.  We will never know what was going through their minds, but to us there was a sense of, “Oh…right. We have to say who we are! Obviously! And once we do, in a light and fun way, we have such an incredible opportunity to connect with these folks at the Waldorf, to say hey, I’m like you, and I’m for taxing us. Aren’t you?”
A few take-aways from the day..

We look forward to doing and learning more with all of you!
Elspeth & Jessie