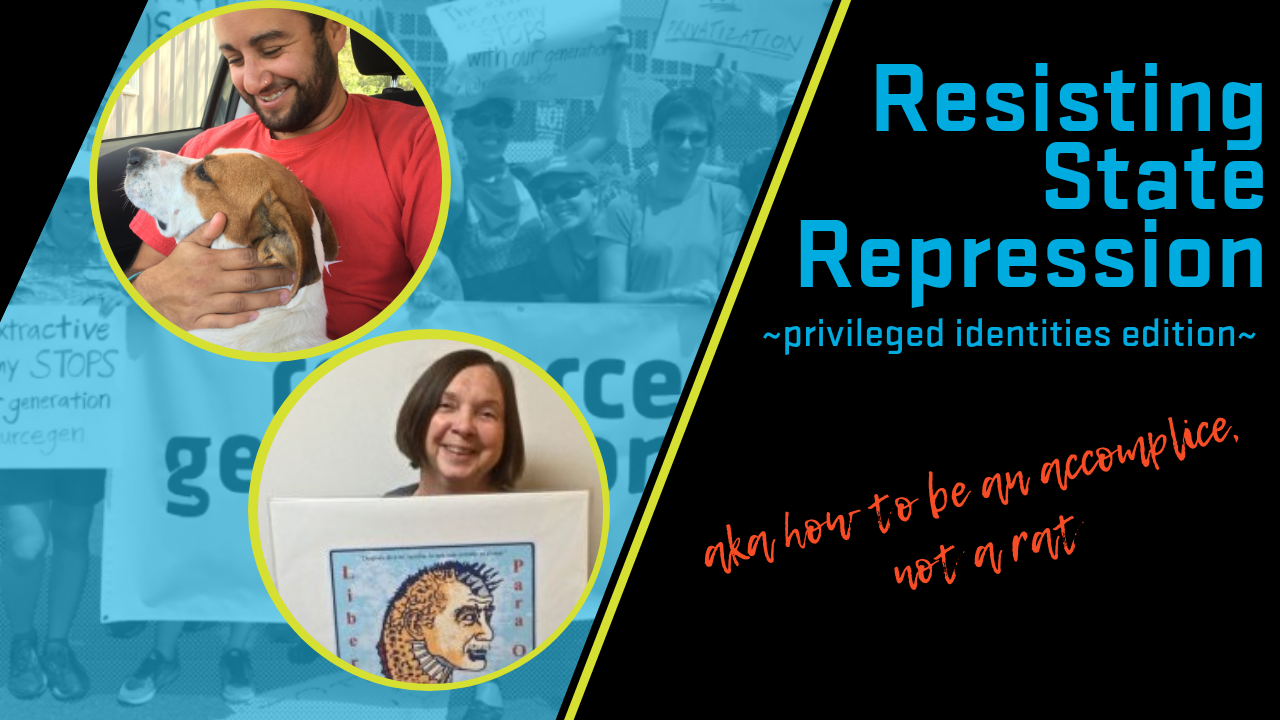 Any time social movements start to pose a threat to current racial and economic systems of power, the state responds with repression.

While working-class communities of color and people who are a part of anti-colonial struggle are the primary targets of this repression, those of us who stand with them are also at risk. In fact, the state often sees people with race and/or class privilege as more likely to cooperate, and our privilege can get in the way of us taking repression seriously, which can put our movement partners at further risk.

This workshop will talk about some common strategies of state repression and best practices for resisting in ways that are aligned with our racial justice values and help us build stronger movements.

Recording of original live webinar below:

Both panelists are leaders of the Catalyst Project

Isaac Lev Szmonko (he/him/his) was born and raised in Waltham, Massachusetts (Wampanoag territory) and lives in Oakland, CA (Chochenyo Ohlone territory). He has been part of movements to abolish imprisonment and policing for more than a decade. Through that work, and supporting Palestinian liberation, Isaac’s learned a tremendous amount from organizers of color about how and why the state targets social movements, and how to resist that targeting and use repression to build bigger and stronger movemnts.

He is a co-author of A Troublemakers Guide: Principles for Racial Justice Activists in the Face of State Repression. He was formerly the campaign organizer for Resource Generation, and currently serves on RG’s National Member Council on the Resource Mobilization committee. He is a white, Jewish, queer, middle-class, trans guy, an introvert Leo, and a giant nerd. was born and raised in Waltham, Massachusetts (Wampanoag territory) and lives in Oakland, CA (Chochenyo Ohlone territory).

Donna Willmott’s (she/her/hers) political roots are in the militant, anti-imperialist organizations of the 1960s, supporting Third World liberation movements at home and abroad, and challenging patriarchy in its many forms. As a college student, she was deeply influenced by the Black Panther Party and was radicalized by the government’s violent response to their organizing. She was incarcerated in the mid-90’s for activities in support of the Puerto Rican Independence movement and much of her organizing has focused on challenging state violence, supporting political prisoners and other people subject to political repression.

Along with Isaac, she is a co-author of A Troublemakers Guide: Principles for Racial Justice Activists in the Face of State Repression. She lives in Oakland CA (Chochenyo Ohlone territory) and continues to work for racial, economic and gender justice. She is a middle-class white cis woman, an elder who still holds onto her freedom dreams.

The Catalyst Project helps to build powerful multiracial movements that can win collective liberation. In the service of this vision, we organize, train and mentor white people to take collective action to end racism, war and empire, and to support efforts to build power in working-class communities of color.