Before RG launched its Giving Pledge and Guidelines in the fall of 2018, we had never made a bold, concrete ask to our members about how much to be giving to social justice movements. And, apart from our every-few-years resource survey, we didn’t have an accurate way of tracking how much our base was moving year to year.

As an RG staff person and member myself, I remember my initial reactions to these new tools. By leading with an ask toward full redistribution, are we going to scare folks away (can I myself live up to this?). And also: is this actually enough? Do the different levels provide enough rigor to hold me and others accountable to the values we want to be living into?

I also immediately thought of the ‘Billionaire Giving Pledge’, started and signed by the likes of Bill Gates, Warren Buffet, and other super-high net wealth individuals. That pledge – asking billionaires to give away half their wealth, in their lifetime – struck me as both comically insufficient (how does someone who has extracted $10B of wealth from communities retaining private control over $5B make any kind of sense?) and ineffective in practice (most billionaire signers have actually seen their wealth increase in the period since signing).

How could we distinguish RG’s pledge from the Billionaire Pledge, and ensure it didn’t repeat the same pitfalls?

Over the past two and a half years, our members have pledged nearly $100M to movements ($27M in 2019, and $68M in 2020). We have a goal of moving $100M in 2021 alone, and are already over halfway to that goal. These are major achievements. And still, comparing to numbers from our 2018 Resource Survey, they represent only a fraction (~7%) of the total assets to which our membership has access (and likely less due to the growth in our membership base over that time).

So, what exactly has changed?

We’ve added a few new fields, all of which are geared toward capturing the multiple ways in which redistributing wealth, land, and power happen. There’s a field to capture the amount we commit to fundraising from others, and all the ways RGers are mobilizing our networks. There’s a field to capture investing, to capture how RGers are shifting power around invested capital to communities most harmed by capitalism, rather than shareholders. And there’s a field that asks people to take collective action toward structural redistribution, beyond any individual giving plans they make.

We believe all of these are essential parts of a long-term strategy toward a world in which wealth, land, and power are equitably distributed. Many of us will have different levers to pull on, given our positionality, at different moments in life. We believe in a strategy that employs all of them.

Our Giving Guidelines have also been updated to become the Redistribution Guidelines. The “Escalate your Redistribution” level in particular has been updated to provide a little more scaffolding (and rigor) as an intermediate step toward 100% redistribution. We’ve also updated our usage guidelines around the word “redistribution,” and use it to refer only to giving over 7% of total assets annually – i.e. more than the average rate that those assets are growing in the stock market. We refer to giving at lower rates simply as “giving.”

The Redistribution Pledge & Guidelines are meant to be tools. They are not an end-point in themselves, and they are themselves the result of decades of cross-class organizing, starts and stops and failures. Above all, they are what we make of them as a membership community. Even if all of RG’s 1200+ current dues-paying members signed the Redistribution Pledge tomorrow – and followed through – we would still fall short of the world we are trying to create without more systemic shifts. (Shout out to chapters and member leaders who are throwing down on issue-based campaigns!) 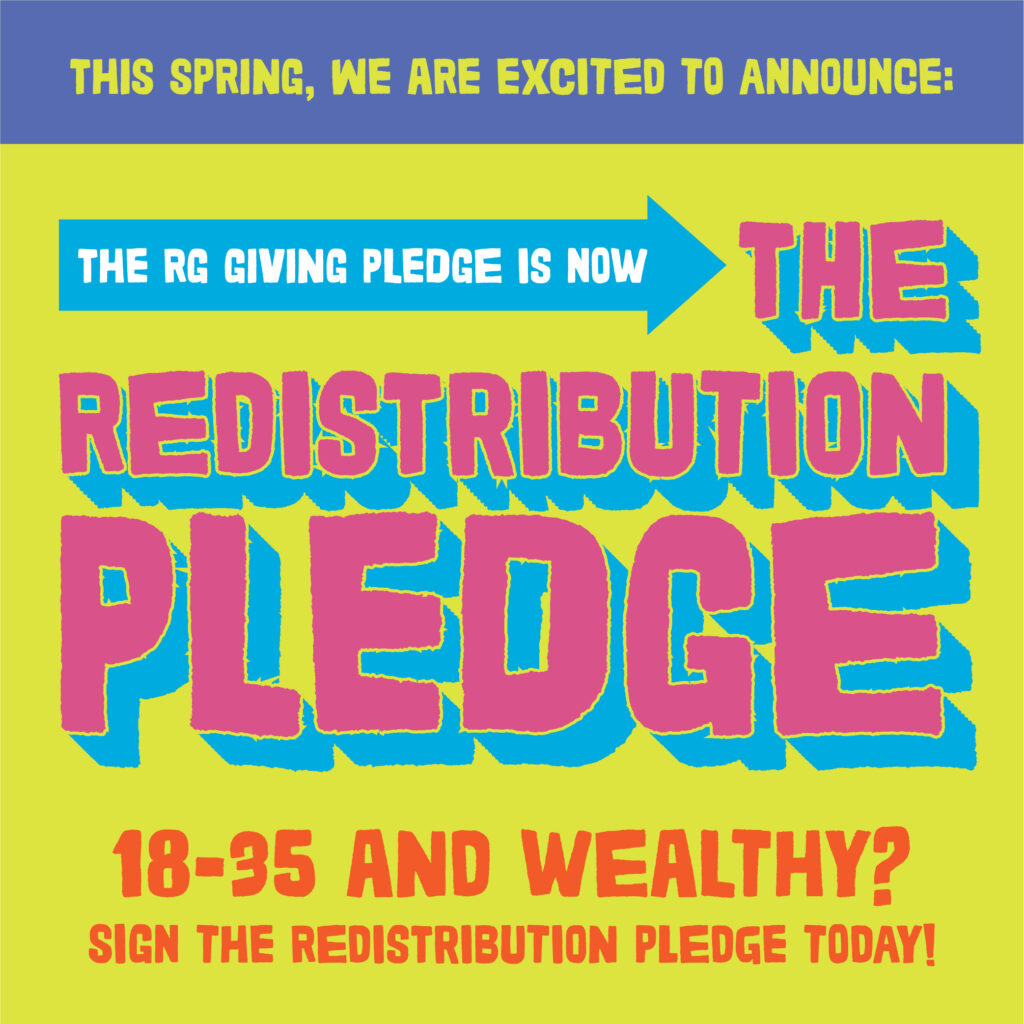 Ways to use the Pledge & Guidelines:

Thanks for being in it with us up to this point – and if you’re just joining RG, welcome. Sign the Redistribution Pledge today, and join us Tuesday May 11th for a launch webinar to celebrate, learn more, and commit to the work to come. We look forward to taking powerful action toward redistribution together and continuing to evolve these tools with you.

Toward the equitable distribution of wealth, land, and power in our lifetimes,
Adam Roberts, RG Membership Director