My story of race, class, and why I organize rich kids

My story of race, class, and why I organize rich kids

I’ve spent the last eight years in various fundraising and grantmaking roles in support of social justice movements. When I talk about my work, after pushing through the looks of confusion and clarifying questions, I often get asked how I ended up at this intersection of money and movements that is full of contradictions and imperfections. There is often an assumption that I come from a wealthy background to even be doing this work. What’s true is that being a white, cisgender man and having learned the language and customs of philanthropy helps me pass as wealthy. I choose to leverage those privileges to access and organize communities with financial resources to align with and participate in movements led by poor and working-class people and people of color.

The truth is I grew up squarely middle-class. Middle-class is a term that is often used loosely, evading honesty about class. Looking back on census data during my childhood, our family annual income has historically hovered right below average. In 1998, when I was eleven years old, my family of four was living on about $50,000 while the median income in the U.S. for families of four was $55,886. Acknowledging the racial wealth divide is also important because when you start accounting for race, white households on average were earning $40,912 while Black households were earning $25,351 and families with Hispanic origin were earning $28,330, regardless of family size. The vagueness of the term middle-class means that those of us who live in the space between classes — and the white middle-class in particular — can choose whether we side with the poor and working-classes or with the owning and ruling-class. If we choose the intrigue of capitalism and the side of wealth aspiration, we can choose to identify with and become part of advancing the economic interests of the smallest set of the population at the expense of the rest of us — even sometimes our own self-interests as middle-class people.

Reflecting back through the hormonal cloudiness of my adolescence, I know now that we always had enough even though it didn’t always feel like it at the time. My sister and I had a stable home (which my parents were on track to owning thanks to a mortgage a bank was willing to provide us) provided by two parents with college degrees. I always had the clothes, school supplies, and food I needed to thrive. They may have been second-hand clothes mostly from thrift stores, and $0.75 public school lunch that was on Styrofoam trays that never changed from kindergarten through my senior year in high school, but it was enough. We planned and saved for the one big vacation we would take each summer via road trip to a little rental house on the beach in North Carolina, which we often shared with aunts, uncles and cousins, or another family of friends. 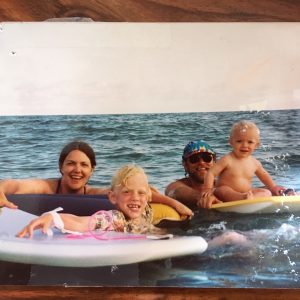 Braeden and family getting sunburned on a raft in Cape Hatteras.

I was not conscious of it at the time, but internalized classism steadily gained more influence over the financial choices I made in the pursuit of being upwardly mobile. By the time I could finally get my working papers and those earliest paychecks making sandwiches and scooping ice cream meant I could supplement the school lunch with Sun Chips and sodas from the school store and explore the best American Eagle and Aeropostale deals that Shoppingtown Mall had to offer. These small markers slowly began to indicate I had expendable income and made me feel closer to the kids with bigger houses whose parents were professors and doctors.  These same upwardly mobile class aspirations also eventually compelled me to choose a private college education at Hartwick College, even though my parents encouraged me to choose a much more affordable SUNY school option to avoid student loan debt. Only a few students in our high school graduating classes at Nottingham High School went to private colleges each year, but the subliminal messages I was absorbing told me that if I wanted to be somebody, I needed to go to a fancy sounding college.

Institutional racism also meant that even though the Syracuse City School District was mostly people of color (enrollment was only 24% white in the 2015-2016 school year) year by year I was slowly tracked into cohorts and classes with a higher percentage of white students.

The race and class tracking I benefitted from in public schools led me into advanced placement and college level courses in high school, which set me up well to compete for scholarships and college access in general. Family income and savings, a home equity line of credit on our family house, and liquidating assets after my grandfather passed away, meant that my parents were able to underwrite $45,000 of the $200,000+ that tuition and expenses for my four years of college would cost. That meant I was left to take on $30,000+ in student loan debt after scholarships, financial aid, and deciding to graduate a semester early to skip out on half a year of tuition and expenses to begin working.

I’m still paying off my student loan debt and am privileged to not have much more like many of my peers. I need to now weigh loan repayment, living expenses, saving for retirement, and being prepared to share the care of my parents as they age if needed and their retirement savings and our safety net programs don’t cover everything. Capitalism is not a system that will take care of everyone. That makes me sad and angry about the masses of folks that are being left behind and exploited. I also feel hopeful that in alignment with movements led by poor people, working-class, and people of color, we can build the people power needed to win justice and accountability in our economy.

The intrigue of capitalism and its promises of wealth and safety were steadily counterbalanced and eventually outweighed by the cross-class and cross-race relationships in my life and the social justice values my parents labored lovingly to instill in me from the beginning. Throughout my childhood before my sister was born, we also rented out the third bedroom in our house to graduate students who I built relationships with as a child. They were often foreign students of color and had social justice leanings and brought that dialogue regularly into our home. Being in a school system that was predominantly people of color also meant that I had an experience opportunity to build relationships across race that I later realized was a rare occurrence among my private college peers.

Organized activism has been part of my life since my participation in the Unitarian Universalist church with my family. I have early memories of riding on busses to rallies and marches into the streets through a model of youth empowerment that allowed me to facilitate meetings among my peers, lead workshops on leadership development and anti-racism, and plan gatherings of hundreds of youth to learn, grow and plan action together. That early experience instilled in me a commitment to organizing and an aspiration to always be seeking a more just world. The church made me believe in movements.

This part of my history also led me to my first “professional” job at the Unitarian Universalist Veatch Program at Shelter Rock — a congregation-based funder that supports communities across the country to build power to bring about social, economic and environmental justice — I didn’t even understand what “philanthropy” was. I just knew I would get to learn about and support movements in the context of clear values of justice, democracy, and equality. I was first introduced to Resource Generation during my time at Veatch, and was invited to join the board to bring my perspective as a middle-class staff person working in social justice philanthropy. I have stayed connected since then, and been changed, frustrated, inspired, and transformed, by the actions Resource Generation has taken since. 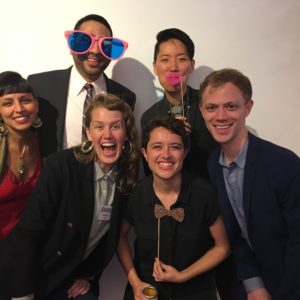 Current and former, staff and members of RG celebrating the Third Wave Fund.

Throughout my subsequent work I have continued to appreciate Resource Generation’s deep commitment to leadership development and political education, challenging our members to take bigger and bolder risks with their giving, and increasingly taking a more visible and public stances like showing up at Occupy Wall Street, in solidarity with the Movement for Black Lives through the It Starts Today Campaign, and in our most recent mobilization to the People’s Climate March. I believe that an active, coordinated, and visible base of young people with wealth can make a meaningful contribution to telling a different story about how much is enough, how much is too much, and contribute to a vision for a different world where all of our communities have what we need.