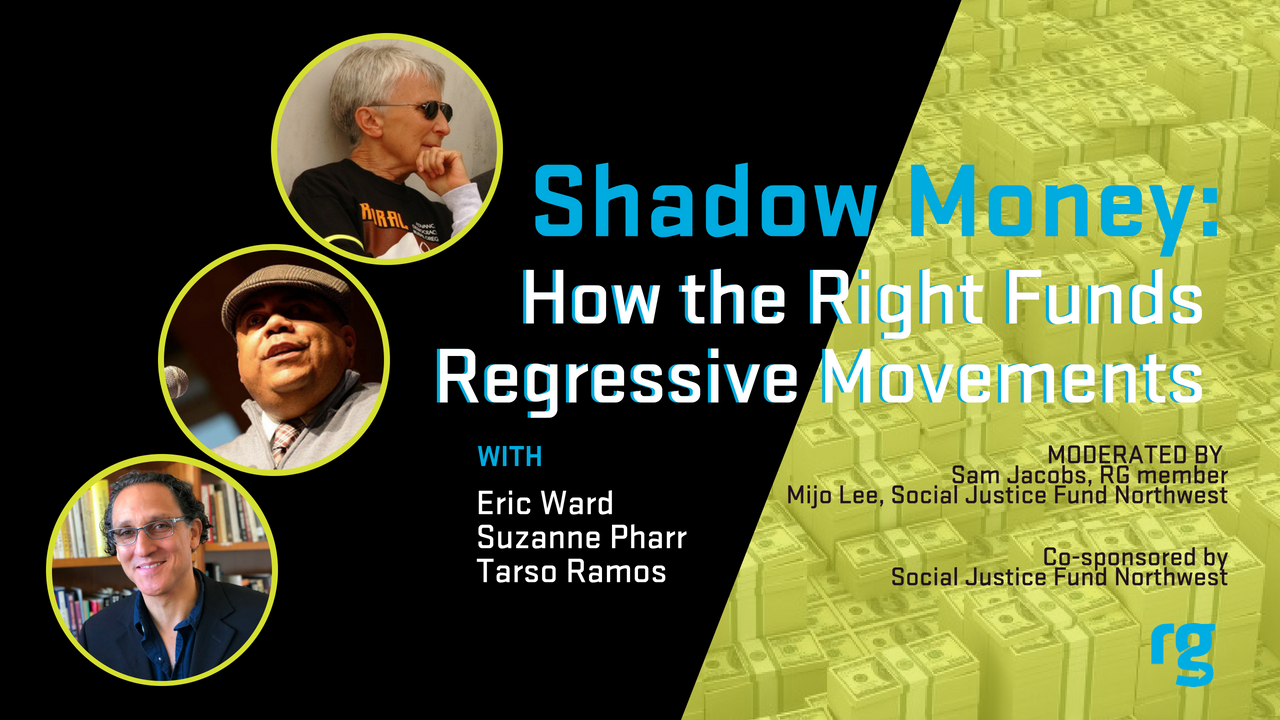 Right-wing philanthropy has played a huge role in changing the political landscape; let’s take a step back to look at how we got to this current political moment.

By pouring money into familiar strategies like organizing and leadership development, funders on the Right have developed infrastructure to win hearts and minds as well as policy. How can we exploit their weaknesses and learn from their success?

Check out the recorded webinar below originally recorded on Thursday, September 6th at 8-9:30pm ET/5-6:30pm PT for a discussion with brilliant social justice movement leaders about what we need to do to fight back against the massive, strategic funding on the Right and show up more authentically for social change in this crucial time.

Suzanne Pharr, a feminist and anti-racist worker, founded the Women’s Project, with the goal of eliminating sexism and racism through dismantling systems of violence and economic injustice. She co-founded Southerners on New Ground, a regional progressive LGBTQ organization, and was the director of the Highlander Center. Pharr authored Homophobia: A Weapon of Sexism and In the Time of the Right: Reflections on Liberation. Pharr is active currently with Project South, the Southern Movement Assembly, National Council of Elders, the Rural Organizing Project, and Grassroots Arkansas. Her books may be downloaded at suzannepharr.org

Eric Ward was appointed the Executive Director of Western States Center in October 2017. The Western States Center is a research, organizing, training, and civic engagement hub for grassroots leaders from diverse communities in the United States’ Pacific Northwest and Intermountain West regions. Before joining the center, Ward served as a program officer at the Ford Foundation and as a program executive at the Atlantic Philanthropies. A published author and oft-cited public speaker, Ward and the recipient of the Peabody-Facebook Futures Media Award, Arab American Association of New York Community Impact Award, and Martin Luther King Jr. Leadership Award.

Tarso Luis Ramos is Executive Director of Political Research Associates, a Boston-based national research center devoted to supporting movements that are building a more just and inclusive democratic society. Ramos has been investigating and challenging the U.S. Right Wing for 25 years. Under his leadership, PRA has provided research and strategic counsel to reproductive justice and LGBTIQ advocates and philanthropic partners in the Global South, Europe, Russia, and the United States. Ramos has launched major initiatives on Islamophobia, antisemitism, misogyny, authoritarianism, White nationalism and the Alt Right, and other emerging threats to democracy. PRA is widely known for its groundbreaking work on the influence of the U.S. Christian Right abroad, including the report, Globalizing the Culture Wars. Ramos is a sought-after public speaker and the author of numerous articles and reports, including Social Justice Feminism and How We Defeat the Right published in March 2018. His work has also been featured in the Guardian, The New York Times, and Time Magazine, among other outlets. Before joining PRA in 2006, Ramos served as founding director of Western States Center’s racial justice program, and exposed and challenged corporate anti-environmental campaigns as director of the Wise Use Public Exposure Project. Ramos is currently an activist in residence at the Barnard Center for the Study of Women and a Rockwood Leadership Institute National Yearlong Fellow for 2017-2018.

Sam Jacobs (he/him) is a Resource Generation member from San Diego, now based in New York where he works with RG’sAction Working Group. He studied engineering and worked in tech for a short time, and now works as an educator. He also funds grassroots social movements that challenge racism and corporate power with a focus on organizations led by people directly impacted by overlapping systems of oppression. He owes a big debt of gratitude to RG and collective giving projects at Corporate Accountability, Grassroots International and the Unnamed Youth Group Coalition in Boston for helping him along the way.

Mijo Lee (she/her) is the Executive Director at Social Justice Fund Northwest. She was born in Missoula, Mont., grew up in Bothell, Wash., attended Western Washington University in Bellingham, and has lived almost the rest of her life in Seattle, where she intends to stay. Except for four years in New York, where she graduated from New York University School of Law, she is a lifetime Northwesterner. Before coming to SJF, she was a public defender on statewide appeals and has a background in organizing in a variety of movements, including fair trade, police accountability, and immigrant rights. She loves helping people realize that they have power to create change through activism, fundraising and giving. Mijo lives in South Seattle with her son, who teaches her more about robotics and coding than she ever thought she’d know. She is also proud to serve on the Board of Grassroots International.

This webinar is co-sponsored by Social Justice Fund Northwest.

Got some class privilege going on?

Want to get involved with RG? Stay connected? Fill out this form to get updates on our work, events, resources, and opportunities across the country!