We are pleased to announce the members of Making Money Make Change Host Committee, the crew who will be carefully and collectively crafting RG’s signature retreat. Look forward to more conference news and information to come from your very own 2015 Host Committee! 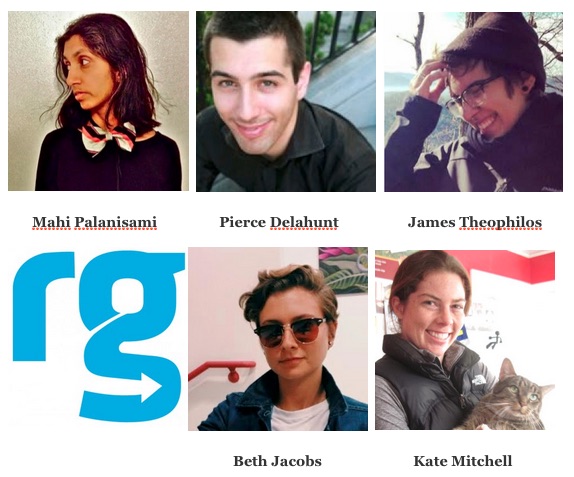 Pierce Delahunt grew up in both New Jersey and New York. After college, he developed his interest in education toward social change. He currently staffs Youth Empowered Action, an activist-education summer camp, and attends the Institute for Humane Education, where he was eventually connected to Resource Generation. He attended MMMC 2014, and joined a praxis group for white allies of anti-racism.

Beth Jacobs is a youthful queer and genderqueer European Ashkenazi Jew who grew up in San Diego where they sprouted their roots in a hyper-privileged setting. While receiving their B.S. in Wildlife Conservation at UC Davis, Beth became more aware of the intersections of the environment, social systems, and personal intersecting identities. They feel that being a part of RG and on the Host Committee are strong ways of addressing resource distribution in a intentional and impactful process. To Beth, it is important to address ways that we perpetuate systemic oppression, both with where we put our time, energy, and resources, and how we connect with and make space with/for others. Currently blossoming in the Bay Area, Beth works at a Jewish Urban Farm in Berkeley; running a free farm stand and hosting public programs. When not at the farm, they enjoy surfing, going to concerts, connecting with people around food, looking at birds, learning in community, and being fantastically organically queer.

Kate Mitchell has been involved with Resource Generation since 2010. She co-leads the North Carolina chapter and enjoys the growing number of RGers in the Raleigh-Durham area, including recent Oberlin graduates, former RG staff, Duke medical students, urban farmers and Southern artists & craftspeople of all stripes. A native North Carolinian, she supports community partnerships and organizational learning at MDC, a research and demonstration organization focused on equitable economic growth in the Southeast. Kate runs and has been happily quilting with her mother since 1997.

James Theophilos is a born Chicagoan who recently uprooted to asheville, North Carolina. A video editor and production assistant by trade, James is critically invested in all things pertaining to video, sound, and new media, and the politics surrounding these things. Alongside this, James is  passionate about queer, race, gender, disability and class activism and theory. James identifies as Greek/Hellenic Turkish, queer, genderqueer, anti-capitalist, upper middle class (and many other things), while also feeling very critical and questioning of identity politics as a whole. Other interests include rock climbing, plants/herbalism, dogs, DIY punk/hardcore, talking about feelings, and writing a lot of letters.

Mahi Palanisami joined RG two years ago. She is a multimedia producer and a mechanical engineer. Her parents talked about money nonstop when she was growing up, and it is part of the reason why she is a mechanical engineer and many women aren’t. She was fortunate to find a lot of peace and identity KFAI Community Radio, SPNN television, and MTN tv in Minnesota. She will be audio recording money stories for KGNU Community Radio in Boulder, Colorado at MMMC 2016!

lives in the Blue Ridge Mountains of central Virginia where he coordinates the Wayside Center for Popular Education, an organizing hub providing leadership development and organizing support to movements for justice in the region.  He’s worked as an organizer in a wide variety of struggles including several years as Program Director for SOA Watch and Regional Organizer for The People United.  His only passion greater than organizing is for the time he spends with his three teen-aged children.

Tiffany Ann Brown joined the Resource Generation team in late 2012 as the new Making Money Make Change Retreat Director, after having an organizational crush on RG since 2003.  From 2002 – 2010 Tiffany coordinated dozens of events for young leaders (ages 18-35), nationally and internationally.   One key program actually began as a partnership with RG and worked with young people with exceptional wealth or fame to leverage their privilege for social change.  She spent years inspired by a community of activists, and decided to take a break from the “sector” to focus on urban homesteading and music.  During this time Tiffany made everything from sausage to lard soap, canned, preserved and crafted.  She also spent a year DJing at a San Francisco bar, hosting a weekly jazz night called No Room For Squares (all vinyl, all the time!).  In addition, she expanded her event-planning portfolio through organizing events on reproductive rights, a wedding and a string of urban homesteading events that merged music and local food called Down Homes Style.  Now Tiffany happily splits her time between RG and making yogurt, having learned that life is about striking a delicate and loving balance of being out in the world and cultivating rich systems that support a relationship to home.

Emil has been involved in Resource Generation since 2010. She has been in five Praxis groups and on the Seattle leadership team for over two years. A Pacific Northwest native, Emil has spent the last 10 years working for housing justice as community organizer, tenant counselor, deputy director, and grantwriter for the Tenants Union of Washington State. Emil is training in generative somatics to support personal and social transformation and healing through embodied leadership. Emil loves to sing, write, and play music and performs in the band The Nature, whose music is best described as queer musical melodrama. She is working from Seattle as RG’s MMMC Organizer, supporting the development of new, dynamic leadership via the transformative experience of RG retreats.