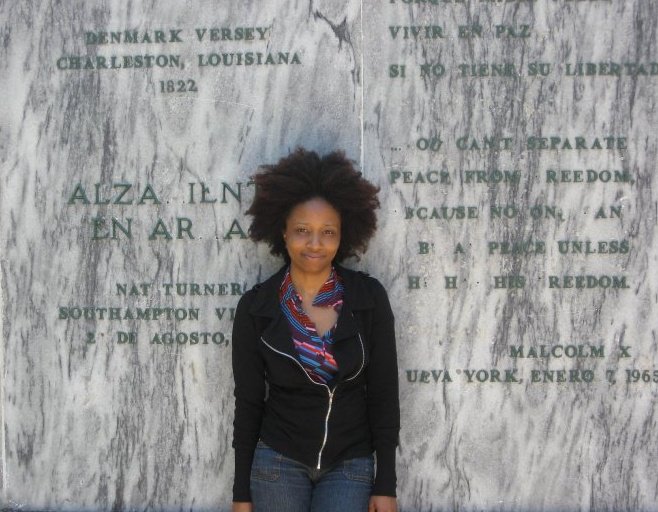 Hello RG community! My mother creatively named me Shonettia Monique. Colonization named me Smith. I only ever share my last name when I am forced. Or at times like this, to tell a part of my story.

Whenever I find myself saying it out loud, my mind and body seem to go into extreme states and I either feel a great deal of pain, sadness and rage, or I shut down and disconnect myself from the moment in which I’m being asked and from the person that’s asking. I cannot easily speak my last name without being reminded of who it truly belongs to – the person who enslaved my great, great, great paternal grandfather. This is not a unique story. It is one of the legacies of white supremacy and capitalism: an ever-seeping wound of surnames, branding via signature.

I am the child of Eva and John. As children in Mississippi, my parents split their time between school and field work: picking cotton and growing vegetables. As young adults, they moved North and married through the practical means of going to the city courthouse. Living in Chicago, they worked assembly lines in steel and plastic factories. (My father’s company, American National Can, would eventually shut down their local plant and move overseas for cheaper labor.) My parents were transparent with me about their finances from an early age. I played “bank teller” with their pay stubs and savings account log. They didn’t have a lot of money but knew how to stretch one dollar into two. I helped my mother organize her coupon book and enjoyed the “bleep” sound the checkout register made after every discount was subtracted. I would read through department store catalogs and grocery ads and imagine how much money It’d take to feed and clothe me and my imaginary children (aka my dolls).

However, the pressures of conforming and showing what was in your pockets always waited for me outside of our home. The clothes that I wore (courtesy of Kmart and Zayre) always fit but were never name brand and for a long time, I didn’t care. I was taught to pay attention to such things from other children, as they talked about who wore the new LA Gear high tops and the latest Fila’s. In fourth grade, my teacher announced a hot dog sale that would happen later in the week during our lunch period. We had to pay in advance, so I took an informational flier home and explained to my mother why I needed $1.20. My mother typically made my lunch for school (I used my reduced-fare lunch card otherwise), and found it silly to pay for a hot dog when I was perfectly happy with the sandwiches I typically ate for lunch (because I went grocery shopping with my parents, I knew that we were able to make three Carl Budding lunchmeat sandwiches with every 40-cents pack of meat).

The next day at school, my teacher announced the name of every student that’d pre-paid for their hot dogs. The only names missing were mine and that of one other student. I was embarrassed and thought that I was going to be left out of some grand hot dog party: I had visions of carnival-like fun being had by all as they ate their delicious Chicago-style hot dogs. I didn’t want to miss out, and I didn’t want anyone to think that I couldn’t afford to participate. I went home that afternoon and took 12 dimes from the coin jar that my mother kept on her bedroom bureau (I thought it’d be more noticeable if I’d taken the quarters). I stole money from my hardworking mother.

On the special day, I received my hot dog: it was plain, over boiled, and we were only given ketchup and mustard as condiments. It was not Chicago-style.  There was no carnival, not even light music piping through the cafeteria speakers. Just lunch time with bland food. But for that moment, I fit in.

As a child, I didn’t consciously want more money in my life, but I did want the opportunities that money afforded. I often fantasized about being a professional dancer and all-around rock star. I knew that we couldn’t afford dance lessons so I left those dreams in my bedroom with my boom box and the vacuum cleaner that doubled as my mic stand. There weren’t any free after-school programs in my neighborhood – there weren’t any after-school programs at all. So, while my deepest desire was to be a creative, my practical plan was to become a doctor or teacher. I’d come to learn that actualized dreams are contingent on money.

Today, both of my parents are retired and live on a very fixed income. There’s a leak in the ceiling of one of the bedrooms of their house. My mother’s medicine and medical visits are frequent costs. They wish to tear out the 30-year old carpet in the house and redo the floors, but have to prioritize and separate needs from luxuries. I chose to introduce myself to you, the RG community, in this way because my parents and ancestors have helped to shape me into who I am. I do not come from a line of community organizers, though I have spent the past 20 years as an activist and movement builder. I come from people who work and love hard.

And back in Mississippi, the roads my parents and ancestors once lived on bear the names of white men who claimed stolen land and not the names of its original inhabitants, or the many people who labored against their will. This is one of the many reasons that I believe in the redistribution of wealth, of land, and in the telling of people’s histories. I am excited to be a part of the RG community and to work behind the scenes as the Events Associate, making sure that folks have what they need to so that restorative economic justice and truth can bear fruit.
—
Shonettia Monique is Resource Generation’s Events Planner.